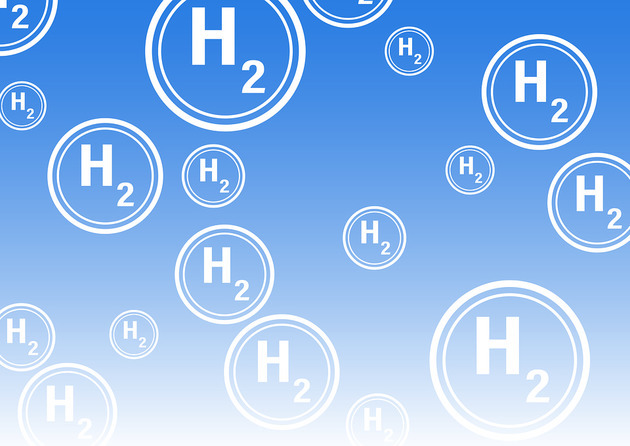 With European and Asian gas prices hitting historic highs, even expensive hydrogen begins to look more attractive, but production costs need to drop significantly and production must be scaled up if it is to become an alternative to fossil gas, writes Robin Mills, the CEO of Qamar Energy and author of “The Myth of the Oil Crisis”, in the article for EurActiv.

The visit of German Vice Chancellor Robert Habeck to the United Arab Emirates (UAE) on 21 March marked the start of a new partnership between two emerging heavyweights in the business of hydrogen. But more importantly, it underscored the role that this “future fuel” could play in curbing climate change and freeing countries from current geopolitical bottlenecks.

Hydrogen offers three key attractions over traditional fossil fuels: it is versatile; it burns clean, is non-toxic and emits zero carbon dioxide; and it has diverse potential sources.

It can replace natural gas in power, industry and chemical manufacture, and oil in long-distance transport.  As conflict in Ukraine drags on, and European and Asian natural gas prices reach record highs, hydrogen gains in attractiveness.

Hydrogen makes up more than nine-tenths of the atoms in the universe but does not occur on Earth in its pure form in large quantities. Rather, it must be manufactured from other hydrogen-containing substances, such as water, or hydrocarbons like gas and oil.

In use, hydrogen is all the same, but is classified by production method into a variety of “colours.” The most common types are “grey” (derived from natural gas without carbon capture and storage, so with high carbon intensity), “blue” (from gas with carbon capture and storage, which removes 90% or more of the associated carbon dioxide emissions during production), and “green” (from splitting water using electrolysis, with electricity derived from renewable or other low-carbon sources).

Currently, nearly all hydrogen is “grey” – made from oil, gas and coal without carbon capture and storage. It is barely traded internationally and most is produced and used within an industrial plant’s own operations. Moreover, it is difficult to transport over long distances because it has low density, only condenses to a liquid at very cold temperatures, and consists of very small molecules that could easily escape from containment systems.

It is also expensive. Green hydrogen costs between $20 and $50 per million British thermal units (MBtu). Blue hydrogen has the lower price tag, averaging between $11 and $15 per MBtu. For comparison, natural gas in Japan and Europe has averaged between $7 and $11 since 2005, while gas produced in the US has been much cheaper, around $4 per MBtu.

However, international gas prices have surged recently due to a demand rebound after the pandemic, a lack of investment in new production, and reduced Russian supplies in Europe. With European and Asian natural gas prices now at about $35 per MBtu, even expensive hydrogen begins to look more attractive.

If hydrogen is to achieve its potential, production must scale up enormously – by eight times or more by mid-century, according to some estimates – requiring investments of up to $15 trillion.

New hydrogen would also need to be low-carbon – blue and green – and reliably certified as such. In these formative years of the industry, an entire commercial value chain will need to be created, similar to the global liquefied natural gas (LNG) industry that developed from the 1960s onwards.

Additionally, production costs must drop significantly, which can be accomplished by greatly expanding the manufacturing of electrolysers – systems that break water into hydrogen and oxygen – improving their performance, and by advancing carbon capture storage for blue hydrogen. The raw materials for some electrolysers include precious metals such as palladium and platinum, which will have to be mined in large quantities or replaced with alternatives.

And long-range transport options from production sites to markets are needed. These can include pipelines, as for natural gas, over moderate distances. But most international trade will be by ship, possibly as liquefied hydrogen, though more likely in a combined form such as liquid organic hydrogen carriers (LOHC), ammonia, or methanol.

Countries can also use hydrogen to make certified low-carbon materials for export, such as steel, creating a local value chain and industrial ecosystem.

Russia, the world’s largest holder of natural gas resources, was beginning to develop a hydrogen strategy. Now those plans have evaporated, opening the door for other players to step in. Europe hopes to generate much of its hydrogen itself, particularly from offshore wind farms. But inevitably, European countries – as well as Japan, South Korea, and many others – will have to import. For mostly ideological reasons, Germany prefers green hydrogen, with Japan, Britain, and others being open to green or blue.

Major hydrogen exporters will be countries with low-cost gas resources – Gulf states and perhaps the US – and those with abundant cheap renewable energy (wind, solar, or hydropower), coastal access, and business-friendly systems. Saudi Arabia, the UAE, Oman, North African countries, Australia, and Chile have all emerged as front-runners in green hydrogen production.

Saudi Arabia’s giant green hydrogen project at Neom, its planned city in the Kingdom’s northwest, is probably the most advanced large new venture. This explains Germany’s keen interest in working with the UAE and other Gulf countries on hydrogen production and transport.

Habeck will not be the last senior politician to appear in the Middle East seeking hydrogen. As net-zero carbon and energy security imperatives become even more critical, hydrogen has rapidly emerged as a tremendous opportunity for the region to add a new sustainable industry to its hydrocarbon wealth.