The global political game in the South Caucasus is finally settled 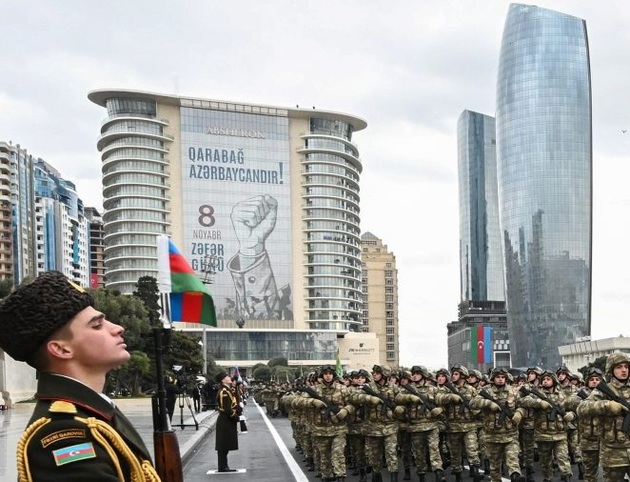 The regions of Azerbaijan occupied by Armenia, have now been finally liberated as a result of counterattacks by the Azeri Army against the Armenians ‘attack on September 27, 2020. As New Europe writes, the Lachin corridor, which connected Armenia to Nagorno-Karabagh and allowed pro-Armenian groups engaged in destructive activities in Karabakh to receive comprehensive support from the Armenian state during the last 30 years, is now under control.

Four UN Security Council resolutions, demanding the immediate withdraw of illegal Armenian military troops from the occupied territories, adopted in the 1990s were implemented by Azerbaijan, and a complex of ethnopolitical confrontation, which resulted in the conflict under the name of “Armenian-Azeri, Nagorno-Karabakh conflict”, was ended.

At first glance, it seems that for the last 30-years of conflict between the two neighboring countries, over these territorial claims, ended with the defeat of one side and the victory of the other. This is true in simple terms of the conflict by the citizens of both countries ending, but it is part of a much larger and more complex political struggle on the global political stage.

But what is the true significance of this event?

Most conflicts that flare up in the world today are no bilateral ones as they may seem at first glance, but multilateral ones that have an impact across the globe.

The Nagorno-Karabakh conflict isn’t an exception. The early years of the conflict coincided with a world-changing political event – the collapse of the Soviet Union.

At that time, the interests of the world power weren’t focused enough to support the accession of newly independent states to the world stage in the short term. Their interest was, first of all, to open new opportunities for their economic expansion over the ruins of the Soviet Union and to immediately bring new states into their sphere of influence, which have not yet been able to determine the path of independent political and economic development and then to direct all the states of the region to their own interests. Armenia’s longstanding interest in neighboring lands has provided an opportunity to ignite a protracted conflict in the newly discovered region of the South Caucasus. In a tactical sense, first of all, it seemed more attractive to capture the country with the greatest potential in the region, such as Azerbaijan.

Armenia, with its territorial claims on all its neighbors, could and has been the most appropriate and convenient means to achieve this goal for big powers. From a strategic point of view, strengthening in the South Caucasus meant gaining the most favorable foothold in order to control and, if necessary, put pressure on regional powers throughout all Eurasia.

According to the considered scenario, Armenia’s “incomplete success” and Azerbaijan’s “efforts to overcome failure” have made both states dependent on global power centers (the U.S., France and Russia). Thus, in the real-politic scenario, Azerbaijan and Armenia, both were seen as victims. This was the essence of the global political game in the South Caucasus in the early years of independence. In order to achieve this, a military solution to the conflict was excluded by signing the relevant documents by the parties of the conflict, and the prospects for a peaceful solution were put in a state of dependence on international power centers, represented by the OSCE Minsk Group.

The Nagorno-Karabakh conflict has been deliberately “frozen” and maintained for a long time. Thus, the victims of the conflict – Armenia and Azerbaijan – couldn’t go forward or backwards with their hands tied at the game table of the world giants. Armenia believed that it would formalize its “military success” soon and end with the conflict in a victorious role, and did not even think that it was a victim of the game.

Unlike Armenia, Azerbaijan, understood the essence of the game and insisted on finding a way out of the impasse. The authors of the game were convinced that the status quo, which was established in 1994, will continue for a long time under the control of the OSCE Minsk Group. It wasn’t expected that any of the global powers would violate the rules of the game because the current situation fully satisfied their interests. This is evidenced by the history of many years of conflicts in the regions of Middle East, Africa and Asia.

1. Azerbaijan has liberated its 30-year-old occupied territories by destroying a strong political game network around the South Caucasus, established by international forces, and fully ensured its territorial integrity;

2. Azerbaijan has ensured that more than 1 million IDPs will be able to return to their homeland;

3. Azerbaijan has figuratively punished its greedy and treacherous neighbor Armenia, which has been deceived by the political game of regional centers of power.

5. Azerbaijan has achieved a remarkable historical success that has aroused admiration and sympathy on a global scale: it has eliminated the hybrid interference of forces from outside the region in the South Caucasus and laid the foundation for peace and stability in this region.

6. Azerbaijan, which had been awarded the role of the victim at the beginning of the conflict, emerged from the war 30 years later as the great victor in an insidious political game played by the greatest powers of the world.