Uzbekistan: virus is no obstacle to get married 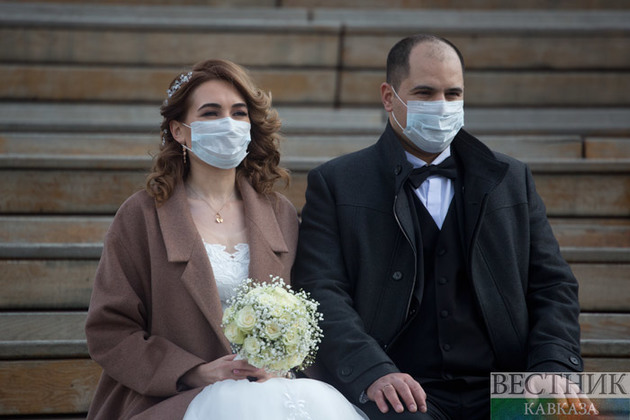 On March 30, 20 tons of cargo were delivered to Uzbekistan from China by a plane. Disposable sterile medical gloves, goggles, face masks and thermal imagery devices will be transferred to the Uzbek military and internal affairs officers. This is the response of the Chinese partners to Uzbek assistance. In March, the midst of an epidemic in China, Tashkent sent them two cargo planes with medical supplies.

Uzbekistan is awaiting the arrival of several groups of Chinese doctors to assist in the fight against coronavirus. According to the Uzbek Ministry of Health, the number of infected is growing and by March 30 it has reached 145 people. Chinese doctors who have gained experience in treating patients in Wuhan are to help Uzbek doctors. According to the representative of the State Committee on Healthcare of the People's Republic of China, Mi Feng, China managed to stop the spread of infection.

For now Uzbekistan is trying to cope on its own. Some new restrictions have been added to the previously introduced quarantine. Starting from Monday moving across the city using private transport is banned. Service vehicles that are involved in ensuring the country's functions are obliged to receive a special pass in the republic's Ministry of Justice.

Citizens of Uzbekistan are asked not to leave the house unless it's essential, observe sanitary requirements and not violate quarantine rules. Nevertheless, more than a hundred violations have been registered in the republic recently, including in Tashkent. For example, last weekend, a wedding event 'Kuev Navkar' was held in one of the capital’s districts (when the groom’s friends come to the bride’s house to eat the solemn morning pilaf before the registry office), Podrobno.uz reported. A criminal case has been opened under article 257-1 of the Criminal Code of Uzbekistan ( the violation of sanitary rules or the rules for combating epidemics). The violator faces a fine of 50 to 100 basic units (up to 23 million soums or $2.5 thousand) or one to five years in prison. Moreover, a citizen of Kazakhstan who visited the wedding tested positive for a novel coronavirus. This means that there will be much more cases.

Meanwhile, the Uzbek authorities are providing support to doctors as much as they can. President of Uzbekistan Shavkat Mirziyoyev ordered to pay monthly $2,500 to the doctors and epidemiologists involved in the fight against the virus, $1,500 to nurses, and $500 to nurses' aids.

This was made possible thanks to donations to the Uzbek President's anti-crisis fund made by Russian billionaires of Uzbek origin - Alisher Usmanov and Iskander Makhmudov. They transferred $800 million to the fund. By the way, Usmanov chose Uzbekistan to self-isolate during the epidemic.

Assistance will be provided to small and medium businesses in Uzbekistan. In order to minimize possible losses, the president adopted a program to support entrepreneurs, as well as citizens forced to self-isolate. To combat the consequences of the coronavirus outbreak, a special fund has been formed in the amount of 10 trillion soums ($1.5 billion). The package of anti-crisis measures in Uzbekistan includes tax breaks and credit debt preferences. The government will provide budget loans to industries that will be affected most by the pandemic. President Shavkat Mirziyoyev noted during a video conference that risks are rising on the tourism sector, the transport and logistics sector, the catering industry, and foreign trade enterprises will not be able to repay loans on time. In this regard, he ordered to extend the maturity of loans and to suspend the collection of tourist fees. Entrepreneurs who find themselves in a difficult economic situation will be granted a six-month deferral on payment of local taxes. Benefits are provided for small and medium-sized businesses, and it is also planned to increase the export of Uzbek agricultural products.

By order of the president, workers in quarantined institutions will not lose anything. Social benefits will be increased by 10%. Parents or guardians of children will be paid a temporary disability benefit equivalent to 100% of the base benefit.

Director of the Center for Research Initiatives 'Ma'no' Bakhtiyor Ergashev believes that external shocks caused by the pandemic will undoubtedly affect the economy of Uzbekistan. Tasks and goals for the growth of Uzbekistan's GDP in the amount of 5-5.5% set for 2020 have become difficult to achieve. The crisis will affect the economy in the area of the demand for Uzbek products, because the demand for textile, fruit and vegetable and other types of products may decrease in the conditions of the crisis and falling incomes in Russia. And all this will lead to problems with the export. In addition, when the ruble exchange rate drops against the dollar, the profit of Uzbek exporters in dollar terms will decrease. Therefore, no one will have an easy life and the Uzbek economy will definitely face upheavals and problems.

"But, if the country's government continues the policy of active investment based on medium-term sectoral programs, there is the opportunity to reduce the impact of external shocks," Ergashev told Vestnik Kavkaza. According to the expert, myths of libertarian economy are crumbling in the context of the global crisis caused by the pandemic. "Without an effective government, all this liberal nonsense of a market that will settle everything is being washed away by history. As it turned out, an effective government, its regulation (even rigid sometimes) is needed in times of crisis. Both the population and business. Everything talk about globalization, which abolishes state sovereignty and nation-states, we are flying to the dustbin of history before us. A strong and efficient government, state investments in strategic sectors, support for domestic producers, economic sovereignty - all that is reborn and returns," Bakhtiyor Ergashev noted. He believes that it is necessary to form a new consensus based on the fact that there is state ownership, effectively managed, and there is a market in those sectors and industries that are given to private owners. And this bunch should work. And examples of China, Vietnam show its effectiveness.

"I even like this situation with coronavirus, which kicks all this liberal-monetarist nonsense. Cleansing the brains, recognizing the emerging new reality is cool! I hope the crisis and external shocks will erase the remnants of the liberal-monetarist idea from the minds of a certain part of Uzbek government officials that appeared three years ago," the expert emphasized.