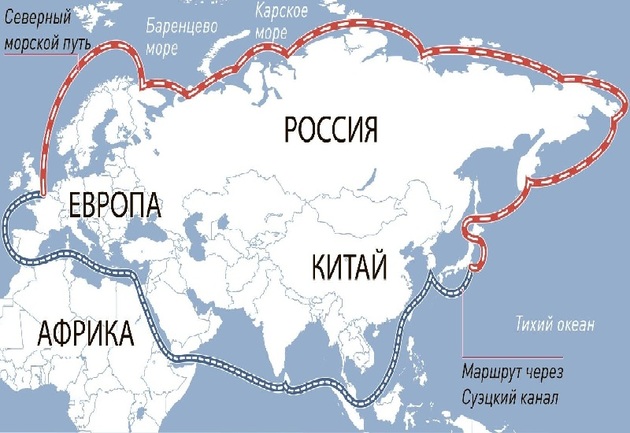 Russia defines the Northern Sea Route as a shipping lane from the Kara Sea to the Pacific Ocean, specifically running along the Russian Arctic coast from Kara Gates strait between the Barents Sea and the Kara Sea, along Siberia, to the Bering Strait. According to Eurasian Times, Moscow seems to be slowly and steadily playing its geopolitical game in the Arctic, by emphasizing the importance of the accessibility to Arctic ports and further developing the shipping lanes of the Northern Sea Route (NSR), connecting the Pacific and Atlantic.With the active support of China in this game, Russia is now wooing Japan and South Korea, with the obvious aim of weakening the US plans in the construct of the Indo-Pacific.

The Russian game-plan has got a further boost with the recent week-long jam of the Suez Canal that began on March 23, when the ultra-large Golden-class container ship Ever Given (weighing 250,000 tons), en route from Malaysia to the Netherlands, ran aground cross-ways, resulting in the lodging of the massive vessels along both embankments of the waterway. It is said that every day the blockage costs the global economy approximately $9.6 billion.  Besides, as the Suez Canal serves as the main transportation route for hydrocarbons being shipped from the Middle East to the European Union and the United States, the blockage of the tankers temporarily raised global oil prices and bred uncertainty among investors.

Russia defines the Northern Sea Route as a shipping lane from the Kara Sea to the Pacific Ocean, specifically running along the Russian Arctic coast from Kara Gates strait between the Barents Sea and the Kara Sea, along Siberia, to the Bering Strait. The Northern Sea Route has a number of alternative passages and routes between Novaya Zemlya and the Bering Strait. The NSR is expected to give Russia enormous strategic and commercial benefits.

For instance, as compared to the Suez Canal route, the estimated shipping through the NSR will reduce the distance between Shanghai and Rotterdam (Europe’s largest commercial port in the Netherlands) by almost 2,800 nautical miles or by 22 percent. This route is also likely to reduce the transportation cost by 30 to 40 percent. Similarly, while a container ship from Tokyo to Hamburg (Germany’s major port city) sails for about 48 days via the Suez Canal, it can cover the same distance by about 35 days via the NSR. Russian analysts say that while an estimated 12 percent of world maritime trade passes through the Suez Canal and although this proportion cannot be ignored, the route must not be made indispensable; the world cannot be over-dependent on the Suez and must have alternative ways. Of course, there is the Israel-UAE alternative canal plan to connect Israel’s Red Sea port of Eilat to the Mediterranean, but it will prove very costly. According to experts, digging canals along the approximately 250-kilometer (155 miles) eastern end of the Sinai peninsula by cutting through hills hundreds of meters high will take an investment of over $100 billion.

In contrast, the Suez Canal is 193 km. In fact, Egypt, which owns the Suez Canal, can build a new canal parallel to the Suez Canal or expand the existing one at a third of the Israeli-UAE project cost. Citing the above factor, Russian analysts like Alexei Zubets, the director of the Institute of Socio-Economic Research at the Financial University Under the Government of the Russian Federation, argue that although the Suez Canal has heretofore been the world’s most reliable transportation artery, its reputation has now been shaken, giving opportunities to the NSR.

Of late, Moscow is also minimizing the uncertainties related to the seasonal state of the northern polar icecap and the Arctic transit capabilities of shippers. It says that global climate change has gradually boosted the competitiveness of the NSR. According to a Russian study, the year 2020 broke yet another record in terms of temperatures, and the Arctic icecap has decreased by five to seven times in comparison with the 1980s. As a result, the area of ice coverage in the Arctic Ocean reportedly shrank to a record low of 26,000 square kilometers last year. This, in turn, has made the NSR more and more navigable, with lesser need of the icebreakers, of which Russia, incidentally, has the largest fleet in the world. In any case, almost all the merchant ships of today are well-equipped with ice-breaking capabilities, enabling them to make their voyages over the Northern Sea Route by themselves, Russians argue.

They are pointing out how a Russian ship transporting LNG from Yamal, one of Russia’s largest natural gas fields on its northern coast, to China, made its return journey between  January 27 and February 19 last year, in the middle of winter and without the need for icebreaker assistance. They also say that despite Western shipping companies showing their hesitance, the world’s largest container shipping company, Denmark’s Maersk, started using this route three years ago.

Similarly, China, one of the first countries to try this route for commercial purposes, has been sending an increasing number of ships to Europe via the Northern Sea Route since 2013. Japan and South Korea, two of the leading industrial nations in the region, have also started using the northern route. In sum, Russians argue that the NSR is no longer an obstacle for maritime transport and that it has become increasingly attractive. They are confident that as per President Putin’s plan, announced in 2018, the average annual cargo volume transported via the Northern Sea Route will be 80 million tons by 2024 and may reach its full capacity by about 2030.

Obviously, as is the case with Egypt because of its Suez Canal, Russia will gain the most once the NSR becomes fully functional throughout the year, not only during the summer months as is mostly the case at the moment. It will attract foreign investments in the Arctic region that is believed to have 13 percent of the world’s unexploited oil, 30 percent natural gas, and 20 percent of liquid gas, not to talk of other minerals and rich bio-resources. With Russia’s growing ties with China, it is not surprising that Beijing has shown great interest not only in the development of the Arctic region but also NSR. With the incorporation of the Polar Silk Road into the Belt and Road Initiative (BRI) network, China is rapidly emerging as the major non-Arctic actor in the region.

Contributing to the development of commercial shipping in the North, China aims at the diversification of its trade routes and linking itself with Arctic countries by a network of maritime corridors through the NSR. That will bring it closer to European as well as American markets and lessen its vulnerabilities in the Indian Ocean and make the Malacca straits that much less vital.

In other words, a fully functional NSR may alter the strategic balance between the Indian and Arctic Oceans, by making the availability of oil and gas cheaper for the main consumers in Europe and East Asia (China, Japan, and South Korea). Once this happens, the Indian Ocean, or for that matter the Indo-Pacific, may have reduced global relevance. However, the above scenario is still in the realm of possibilities because of three questions for which there are no easy answers:

First, the NSR will be economically attractive provided there are good local infrastructures, for developing which Russia does not have adequate funds of tens of billions of dollars (based on conservative estimates). Will China help Russia in this, without attaching strings?

Secondly, will not the expanding US sanctions on Russia make the Bering Strait, which separates Russia from the United States physically, a dangerous bottleneck and thus minimize the commercial competitiveness of the NSR?

Thirdly, is it safe to make the NSR an important transportation artery in a region of ecological tragedies because of the melting of the permafrost in the High North?