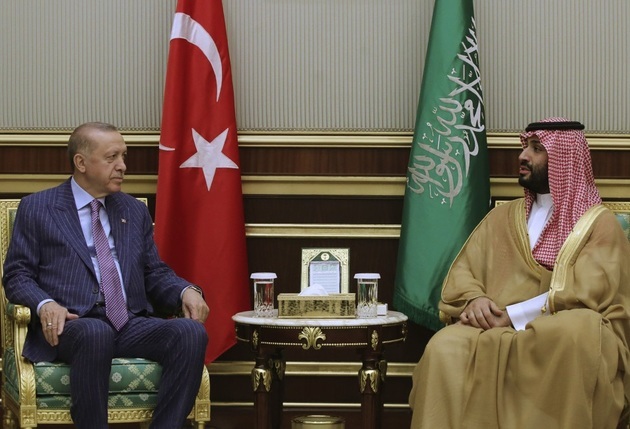 On 28 April Turkey’s President Recep Tayyip Erdogan landed in Saudi Arabia for a two–day visit for the first time in around five years. The trip came after several attempts to repair ties amid the acute shift in regional dynamics following the defeat of Donald Trump in US presidential elections and the al-Ula agreement, which ended the Gulf crisis of 2017 and paved the way for Turkey to normalise its relations with key regional countries.

According to The New Arab, despite having opposing views on several regional issues over the last decade, Turkey and Saudi Arabia have maintained a good level of cooperation, policy coordination, and formal communication. The resilience of Turkish-Saudi ties will depend on personal relations between Erdogan and Mohammed bin Salman, as well as the shifting regional dynamics that prompted diplomatic normalisation in the first place.

The peak of bilateral relations was observed in 2015-2016 when King Salman bin Abdulaziz ascended to power and the two governments established a strategic cooperation council. Although the Gulf crisis and blockade against Qatar created cracks in bilateral relations, Turkey was keen to resolve the crisis and maintain the tradition of good ties with the Kingdom. The 2018 murder of Jamal Khashoggi in Istanbul was the single most damaging incident not only to bilateral relations but also to personal relations between Erdogan and Crown Prince Mohammad bin Salman. The Khashoggi murder did serious damage to the image of the Saudi Crown Prince worldwide and put diplomatic and financial pressure on the Kingdom. However, he has managed to weather global condemnation, prompting Turkey to eventually reassess its position.

The Saudi-Turkish rapprochement started as early as October 2020. King Salman and President Erdogan exchanged positive messages in what seemed to be exploratory normalisation efforts from both sides. Nonetheless, at a certain point, the initial rapprochement process stalled. The absence of an adequate formula to reset relations postponed the normalisation of relations for about a year. During that time, Turkish and Saudi officials met several times on several occasions in an attempt to bring an end to the undeclared Saudi boycott on Turkish exports and solve problematic issues at the highest level.

While senior Turkish officials have been clear and direct regarding their messages and intentions to mend fences with Saudi Arabia, their counterparts have been reticent at the public level. However, both Turkish and Saudi policymakers played their part in the two-way process of reconciliation. According to one source with knowledge of the matter, “the Saudis tried - at a certain point - to free the abducted Turkish citizens in Libya who were held for nearly two years by forces loyal to Gen. Khalifa Haftar before they were freed by the Qataris in November 2021”. It is believed that Saudi officials made this effort to express their goodwill towards the Turkish side.

In the same month, a promising meeting occurred in Istanbul between Turkey’s Vice President Fuat Oktay and Saudi Minister of Commerce Majid bin Abdullah al Qasabi, a high-profile minister with close ties to the Crown Prince. The next month, Erdogan and Mohammed bin Salman came very close to meeting in Qatar. Although Qatar’s foreign minister stated that the timing of the visits was coincidental, Doha had a vital interest in seeing both sides restore their ties.

In January, Erdogan announced that he would visit Riyadh in February. However, the visit was postponed at the last moment. The decision by the Saudi side was based on two reasons. Firstly, Riyadh’s prestige would not allow it to come second after the UAE. Secondly, Erdogan’s visit to Abu Dhabi would have overshadowed his visit to Riyadh. More importantly, Saudi Arabia’s Crown Prince MBS was not settled yet on the right formula to reset relations with Turkey. A Saudi letter to Turkish authorities in March 2022 cleared the way for swift progress on this matter. The letter asked the relevant Turkish authorities to transfer the Khashoggi murder case to Saudi courts. Subsequently, the Turkish state prosecutor requested the transfer of the case on the basis that statements could not be taken from the 26 Saudi defendants being tried in absentia.

The decision to practically close the case was merely symbolic given that Turkey’s Presidential Advisor Ibrahim Kalin had already expressed a year earlier that “the Saudi authorities had a court. Trials have been held. They made a decision; so we respect that decision”. In other words, Kalin implied that Ankara had exhausted all its means in attempting to bring justice and there was nothing more it could do.

From the Turkish perspective, normalising relations with Saudi Arabia at this particular juncture is the prudent thing to do. Not only because this would be compatible with the wider regional dynamics at play, and the reorientation of Turkish foreign policy to accommodate these changes, but also because it would serve the interests of both sides and equip them with the right tools to counter any looming challenges. Erdogan would certainly like to stabilise Turkey’s foreign policy and resolve outstanding problems to focus his undivided attention on the domestic front. In this sense, Ankara seeks to boost economic interactions with the Kingdom, increase the volume of bilateral trade, attract Saudi foreign direct investment, and increase the number of Saudi tourists.

From the Saudi perspective, restoring relations with Turkey is also congruous with Riyadh’s recent moves to respond to shifts in regional dynamics and the challenges stemming from them. Most recently, Saudi Arabia offered the Houthis a nationwide ceasefire in Yemen under the auspices of the United Nations (UN), invited Chinese President Xi Jinping to visit the Kingdom, and reportedly reached a 10-point memorandum of understanding (MoU) with Iran. The current breakthrough between Turkey and Saudi Arabia has occurred in the wake of three major regional and international developments, which have enabled and expedited the process and encouraged Riyadh to reconsider its relations with Ankara.

First, the degree of normalisation between the UAE and Turkey was beyond Riyadh’s expectations. Given the excellent state of Turkish-Qatari relations, and progress in rapprochement efforts between Turkey and Egypt, Egypt and Qatar, and Turkey and Israel, Saudi Arabia appeared to be left out of evolving regional dynamics.

Second, the deterioration of Saudi-US relations against the backdrop of refusing to endorse the US request to increase oil production has increased pressure on the Kingdom.

Third, the expected impact of negotiations to revive the JCPOA between the signatories of the original agreement, mainly the US and Iran, on the security and regional interests of Riyadh as well as Ankara also constituted a significant incentive.

If the JCPOA is reactivated anytime soon, or Iran continues marching towards the nuclear threshold, both scenarios will have a profound impact on regional security, particularly on Saudi Arabia and Turkey. In this sense, the Iranian factor is certain to remain a strong incentive for better Saudi–Turkish relations. Whether the normalisation process between the two regional powers will be resilient enough to produce concrete outcomes will be highly dependent on personal relations between Erdogan and the Crown Prince, and the regional and international dynamics which brought about such a rapprochement in the first place.