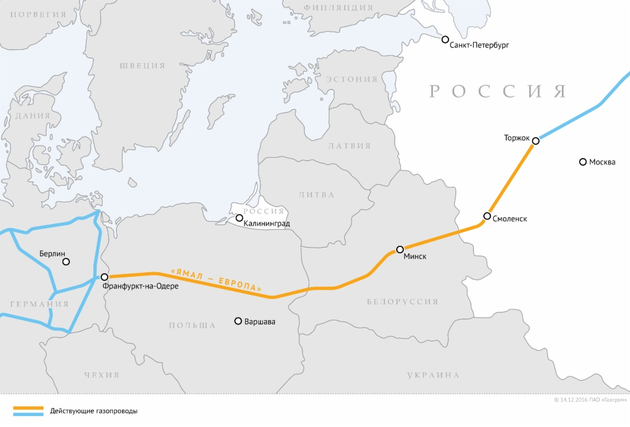 Yesterday Gazprom agreed to change the price conditions for gas supplies to Poland through the Yamal-Europe gas pipeline established by the Stockholm arbitration court, the head of the Polish state concern PGNiG informed. In November last year, Warsaw said it was not going to extend the Yamal contract, which expires by the end of 2022. PGNiG intends to increase LNG supplies from the USA and Norway.

The Yamal-Europe gas pipeline passes through the territory of Russia, Belarus, Poland and Germany. Its construction began in 1994, and with the commissioning of the last Yamal-Europe compressor station in 2006, it reached its design capacity of 32.9 bln cubic meters per year. The mainline originates from the Torzhok gas transmission hub in the Tver region, the gas is supplied from the Northern Regions of the Tyumen Region (SRTO) - Torzhok pipeline. The Belarussian section is 575 km long,  the Polish - 683 km. The westernmost point of the gas pipeline is the Malnov compressor station in the Frankfurt region near the German-Polish border, where the gas pipeline connects to the YAGAL-Nord gas transmission system, which, in turn, connects it to the STEGAL-MIDAL-Rehden UGS.

European gas consumers, especially in Germany, are dependent on Poland’s willingness to set reasonable transit tariffs for the Polish section of the Yamal gas pipeline. But a deadline looms, and the risk of disruption exists, writes Danila Bochkarev in the article Another ‘Russian pipeline deadline’ approaches – this time with Poland in focus for Euractiv. In December 2019, Russia’s Gazprom and Ukraine’s Naftogaz signed a new gas transit agreement which put an end to 18 months of EU-backed negotiations and the issue of energy transit disappeared from the EU energy agenda. However, there is another “gas deadline” approaching with no Brussels bureaucrats lending a hand this time, to bring the parties towards a mutually acceptable deal, as the transit contract for the volumes shipped via the Polish section of the Yamal – Europe pipeline expires in May 2020.

Poland has a long history of successful cooperation with Gazprom both as a consumer and a transit state. As of 1 January 2020, around 335.5 billion cubic meters (bcm) of Gazprom gas have been sold in Poland. In 1993 Gazprom and Polish state-owned gas company PGNiG established a joint-venture company (EuRoPol Gaz S.A) to build and operate the Yamal-Europe pipeline. In this respect, PGNiG was the first European company to create a new joint gas transportation company with Gazprom after the end of the Soviet Union. The pipeline was commissioned in 1996. Upon completing the last compressor station in 2006, the pipeline became fully operational and reached its planned capacity of 33 bcm/year.

Polish and Russian companies agreed to “offset” Gazprom’s investment against transit fees (with prices of Gazprom gas supplied to Poland also being part of the equation) which kept Poland’s transit revenues within certain limits. The transit deal was followed by a supply agreement signed in 1996. In November 2019, PGNiG formally declared its intent not to renew the contract which is expiring in 2022. From the very beginning, Poland and Russia disagreed on the transit fees methodology. Gazprom stressed that the pipeline should just recover costs and not make any significant profit, while the Polish side insisted on the higher transit fees and consider the project primarily as an additional source of income.

In 2020, transit capacity of the Polish section of the Yamal-Europe pipeline are available through auctions and therefore subject to the EU’s Third Energy Package rules as elsewhere in the EU. Poland already declared its intention to increase transit tariffs, potentially even exceeding the current Ukraine transit fee.

Should Poland decide to follow this path, they would infringe the EU energy acquis. For example, high fixed ship-or-pay commitments and the level of transit fees in Ukraine’s transit deal are hardly compatible with the letter and the spirit of EU energy law and plans for gas infrastructure investment in Ukraine.

European network codes also stipulate that gas transport companies should cover a reasonable return on their investment, operating costs but should not generate excessive revenues.

The issue of transit itself also became increasingly politicised. In 2002-2014, Poland and Russia had been discussing the enlargement of the gas corridor and building a new pipeline towards Slovakia and Hungary via Poland.

In April 2013, Gazprom and EuRoPol Gaz signed an MoU to build Yamal-Europe-2 pipeline, but then Poland’s Prime Minister Donald Tusk reacted negatively and the project got stalled. Following Tusk’s statement, Poland started to reduce its’ reliance on Gazprom’s gas and has already achieved a high diversification of its transport and could meet over 90% of its gas demand from non-Russian.

Poland rapidly emerges as a regional gas hub aimed at re-exporting LNG to the neighbouring countries and sees other regional infrastructure projects (for example, such as Nord Stream 1&2 pipelines) as competitors, also threatening the gas flows via the Polish section of the Yamal-Europe pipeline by making the use of this pipeline commercially less attractive.

Generally, Poland is a pioneer in legal attacks against competing infrastructure projects. In May 2018, Poland’s Office of Competition and Consumer Protection (UOKiK) has initiated proceedings against Gazprom and five international entities responsible for financing the Nord Stream 2 gas pipeline.

The General Court – on Poland’s request annulled the exemption regime for the operation of the OPAL gas pipeline. The delay in the Nord Stream – 2 construction was also at least partly due to active Poland’s (Polish daily Rzeczpospolita published a report covering this issue) and Naftogaz of Ukraine’s lobbying in the United States.

Last but not least: Polish gas company PGNiG requested German energy regulator Bnetza to be included in the consultation on the derogation for the Nord Stream 2.

European gas consumers, especially in Germany, are therefore becoming depended on Poland’s willingness to set reasonable transit tariffs for the Polish section of the Yamal – Europe pipeline as the price they pay for their gas imports will be partially dependent on the transportation costs.

The EU consumers’ vulnerability is increased by the fact that there is an objective contractual and, going forward, physical cap limiting the volumes which could be shipped via Ukraine as transit flows will decrease to 40 bcm/year as of January 2021.

In March 2020, the CEO of Ukrainian gas TSO Sergiy Makogon announced that his company plans to maintain and refurbish only around 40 bcm/year of a transit pipeline capacity and decommission the remainder.

In this situation, Poland might be tempted – as Ukraine did in the past – to use this quasi transport monopoly (in relation to Yamal-Europe pipeline) to ask for additional concessions. Poland has already an improved negotiation position: Ukraine capacity is settled at a capped rate, while Nord Stream 2 is dragged through every possible legal battlefield to extend the delay or undermine the project’s business case.

The continuation of a stable and affordable gas transport via Poland is, however, a matter of strategic importance both for Germany’s and the EU’s energy security. Warsaw should remember that European energy solidarity is a two-way street and also applies to other EU member states, not solely to Poland and the Baltics.

Furthermore, if the Polish transit tariff is too high, it would be difficult for Poland and PGNiG to argue that the Nord Stream -2 is detrimental to Poland’s/EU’s energy security by making the use of the Yamal-Europe pipeline less attractive and ultimately unsustainable.

In fact, introducing excessive transit fee could be hardly seen as a gesture making the pipeline more attractive for the customers.

Austria tells Gazprom 'use it or lose it' on gas storage