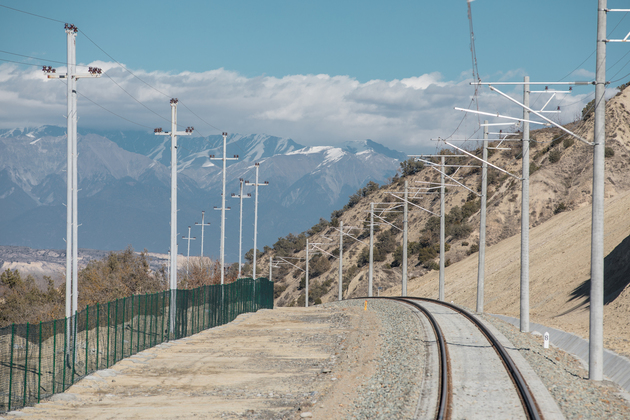 Traveling from Baku to the city of Gabala, one of the country’s main touristic destinations, has become a lot faster thanks to a newly launched railway, Caspian News reports. Azerbaijani President Ilham Aliyev inaugurated the single-track Laki-Gabala railway which connects a northern district with a central settlement of the country on a 44.5-kilometer route. The new railway extends to the Laki station of the Baku-Boyuk Kasik railroad, which stretches across Azerbaijan from the capital Baku on the east to the border with Georgia on the west.

Azerbaijan Railways Company will reportedly operate KISS branded electric trains developed by Swiss manufacturer Stadler on the new high-speed rail line. The average speed on the road is expected to be 100 kilometers per hour, taking passengers from Baku to Gabala in around 3 hours. Established in 1878, the railway system in Azerbaijan is the busiest and largest in the South Caucasus region spanning over 2,900 kilometers.

The government in Baku has spared no effort to upgrade both the fleet and technical capabilities of the national railway. Currently, 60 percent of the overall 2,910-kilometer railway grid is electrified. The obsolete Soviet-era cars have been replaced with cutting-edge coaches purchased from leading global manufacturers Alstom and Stadler.

In 2017, Azerbaijan launched the 846 km-long (526 miles) Baku-Tbilisi-Kars (BTK) railway, which is considered to be the most pivotal link in the modern railway grid of Azerbaijan. The newly opened BTK railway is expected to cut the transit time for the shipment of goods coming from Far East to Europe by almost half.

In addition to international connections, the government of Azerbaijan is investing in railway infrastructure to facilitate safe and easy cargo and passenger transportation. The new railroad to Gabala aims to promote inland travel and leverage the vast tourism potential of Gabala.

With a population of about 110,000, Gabala is one of the most-visited tourist destinations in Azerbaijan. The city's history dates back at least 2,400 years. Archeological findings in the area originate from the ancient Azerbaijani state of Caucasian Albania, which differs from the modern state of Albania in Eastern Europe. Gabala's average annual temperature of about 10 degrees Celsius (50 degrees Fahrenheit) makes it an excellent year-round vacation spot during the winter and summer months.

Attractions for nature-lovers in Gabala include Lake Nohur, the Seven Beauties waterfall, Gabaland Amusement Park, and a picturesque view of the high-rise Caucasus mountain range. Tufandag peak, the third-highest in the range, stands at over 4,000 meters (4,375 yards) and is recognized by hikers and climbers. Its summit is home to the highest mountain lake in the region, known as Lake Tufan.

The region is also known for fishing, a growing culinary tourism industry and its international music festival held annually in July. Gabala is one of the most popular destinations for tourists from the Commonwealth of Independent States (CIS) region.

Azerbaijan and Singapore to sign agreement on avoidance of double taxation