Azerbaijan's fight against coronavirus and its impact on economy 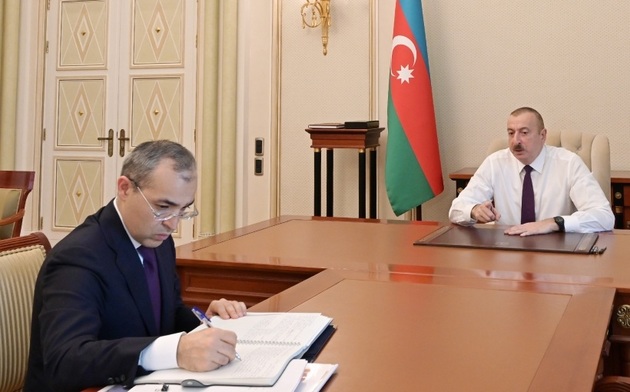 Azerbaijan will direct 3% of GDP to support the economy, it was announced after yesterday’s meeting between President Ilham Aliyev and Minister of Economy Mikayil Jabbarov. The fast-spreading coronavirus has had a negative effect on the most countries' economies. "In the leading countries of the world and Europe, things are getting out of control, about a thousand people die every day in the most developed countries, and it is difficult for medical personnel to provide proper services ... The situation in Azerbaijan is more favorable compared to other countries," Ilham Aliyev said.

This situation is probably due to the fact that Azerbaijan acted more decisively: it closed all land borders, imposed quarantine, closed all schools, kindergartens, universities, cafes, restricted the number of flights sharply. Today, only two international flights are carried out once a week; Azerbaijani citizens arriving from abroad  are put in quarantine - as of now, about 4.5 thousand people.

Nevertheless, a sharp drop in oil prices on global markets, also caused by a pandemic, can create problems for the Azerbaijani economy, despite the fact that this year the economic dynamics was positive. In January-February, gross domestic product increased by 2.8%, by 6.7% in the non-oil sector, and by 21.7% in the non-oil industry. Inflation was only 2.8%, while household incomes increased by 9%.

To minimize the economic and social consequences of the pandemic, President Aliyev decided to allocate a billion manat and create working groups designed to ensure economic stability, paying special attention to business entities operating in the areas most affected by coronavirus, where more than 300 thousand people work .

Ilham Aliyev asked all Azerbaijani businessmen not to lay off workers. In addition, the Coronavirus Support Fund created by the Presidential Decree has already received over 100 million manat, with only 20 million of them transferred from the President’s Reserve Fund. For more details on measures taken, see "Azerbaijani Economy Ministry discloses details of state programs to reduce coronavirus impact."

"Our main objective is security, health and welfare of citizens.  Our policy is centered on the people of Azerbaijan, and we have repeatedly proved this ... I believe that it is necessary to deepen reforms even in areas not related to the pandemic, and we will do that. Additional measures will be taken in the area of improving the banking sector and financing the real economy, "the president said.

As for the social sphere, the minimum wage was doubled last year, the minimum pension was increased by 70%, benefits by 50%, while some benefits were doubled. This had a very positive effect on people's lives. In addition, the issue of overdue loans was resolved in Azerbaijan at the highest level.

"The fight against the disease, economic activity, the solution of social issues, the understanding of every person’s problems, our desire to help and our intentions reflect our policies and, at the same time, will be the best service to the citizens of Azerbaijan... The outlined reforms related to our overall economic development should be deepened too. The pandemic should not stop us. We should not waste time," Ilham Aliyev said.

The main goal is to narrow the scale of the shadow economy, according to him.  Last year, tax and customs authorities transferred one billion manats to the treasury in excess of the forecast by reducing the shadow economy. Many entrepreneurs have already left the shadow economy and are working in the “white” economy, are paying taxes to the state and have removed informal employment from their agenda.

"We must work and live as if we were living in a post-oil era. Now that the price of oil is $21-22, this is actually a post-era period for us. We have carried out preparatory work for this period and it is still ongoing. Therefore, a lot also depends on entrepreneurs. We have made all the necessary decisions, made and will make all the necessary amendments to the legislation. So entrepreneurs must work in accordance with our common cause, in which case we will be able to overcome this crisis with dignity," Ilham Aliyev said.

Mikayil Jabbarov said that representatives of both private and banking sectors, as well as the Azerbaijan Banks Association offered to consider the capital and property amnesty as an important tool in reducing and eliminating the shadow economy. "Since last year, we have been collecting payments to the State Social Protection Fund. About 120 million manat was directed to the State Social Protection Fund in the first quarter in addition to the common funds. Among the directions for the medium term, the priorities are expanding the agricultural processing sector and strengthening support for the construction sector, expanding activities in this area ... A number of projects are being prepared in the mining industry, which expands the export potential of Azerbaijan, as well as creates more jobs in the regions, modernize them and strengthen industrial capacity," the minister of economy said.

These measures are designed to replace oil revenues at the expense of the non-oil sector, which so far remains the basis of the Azerbaijani economy. At the same time, Ilham Aliyev called for increasing production of export-oriented products, continuing the certification process in business entities in order to make Azerbaijani products competitive both in the domestic and foreign markets.

Strengthening The Economy Of Nakhchivan