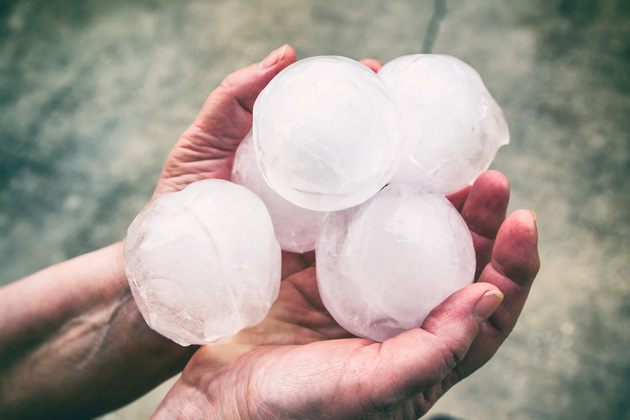 Australia’s south-east has been lashed by severe thunderstorms and large hailstones that destroyed buildings and cars in Canberra and left two tourists in hospital after they were injured by lightning, The Guardian reports in its article Huge hail batters Canberra as severe thunderstorms hit south-eastern Australia. Two supercell thunderstorms brought hail and heavy rain to cities and towns across the east coast on Monday, battering the outer suburbs of Sydney about 3pm, with 4.5cm hailstones recorded and strong winds bringing trees down over cars in the Sutherland area.

In Canberra, where two people were also treated for minor injuries, a 15-minute blast of wild weather just before 1pm resulted in wind gusts up to 117km/h, while golf-ball-sized hailstones smashed through car windows and ripped branches from trees.

Across south-east Queensland 20,000 homes and businesses were without power and two train lines were forced out of action during the peak-hour rush as a storm front battered the state.

Melbourne, which endured its own destructive hailstorm on Sunday evening, was spared more damage, although the outer suburbs received heavy rainfall.

In the Blue Mountains, a 16-year-old boy and a 24-year-old man were injured by lightning at the Giant Stairway Walking Track in Katoomba, the New South Wales ambulance service said.

The boy was treated for burns to his torso and lightning strike entry and exit wounds to his arms and feet. Both were taken to hospital in a stable condition.

The Bureau of Meteorology had warned on Monday afternoon that damaging winds, large to “giant” hailstones and heavy rainfall may lead to flash flooding across greater Sydney, as well as parts of Melbourne and south-east Queensland.

The bureau warned people in the storm’s path to take cover indoors, away from windows, keep children and pets indoors, and unplug electrical equipment.

At 7pm, the bureau said the threat had passed for the greater Sydney, Brisbane and Melbourne areas.

Authorities in the ACT received more than 1,200 calls for help following the short deluge, while two people were treated for minor injuries.

Earlier, the duty forecaster at the bureau, Abrar Shabren, said major storm cells such as the ones predicted were highly volatile.

“This kind of storm is quite erratic and quite unpredictable,” he said.

The warnings came as damaging winds from thunderstorms across central NSW on Sunday whipped up dust storms that turned daytime into night.

Downpours have provided relief for parts of drought-stricken NSW, and helped firefighters slow the spread of bushfires and build containment lines ahead of increased fire danger mid-week.

“We have a very active thunderstorm day forecast, particularly across south-eastern and central-eastern parts of the state, as well as parts of the south-west slopes,” said a bureau meteorologist, Rose Barr.

As the effort to put out the remaining fires in Victoria continued, a severe weather warning was in place for central and eastern parts of the state, including fire-ravaged East Gippsland.

Widespread falls of between 10mm and 30mm were expected but some areas were warned to expected isolated totals of up to 80mm or 100mm.

The wet conditions were expected to lead to flash flooding in some areas but the weather bureau said rainfall was unlikely to put out remaining bushfires.

More rain was also forecast for south-east Queensland after massive downpours caused flash flooding in parts of the state at the weekend.

Stanthorpe recorded more than 75mm from Friday, just days after the region officially ran out of water.

The Southern Downs mayor, Tracy Dobie, said many rural residents in the area had their domestic water tanks filled from the downpour.

There was direct rainfall into the town’s main water supply, Storm King dam, but a lack of runoff from catchments had kept the dam at near-empty. But Dobie said any further rainfall would have to be significant to break the drought. “We need six months’ worth of water to cease water trucking,” Dobie said on Monday. “The dam received one week’s worth of water, but any more rain could see runoff into the dam.”