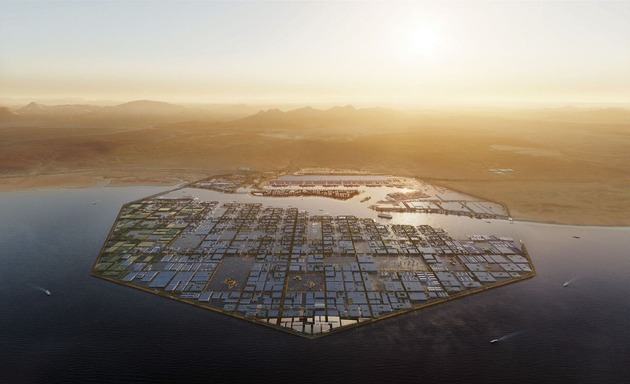 Neom, the Saudi futuristic city, will be run by 100 per cent renewable energy – from solar, wind and hydrogen-based electricity generation – ensuring a zero-emissions and carbon-positive ecosystem. Neom promises to be a regional powerhouse in water production and storage, based on water desalination. The high-tech interoperable, modular system will attract water-related research companies and start-ups to innovate and lead in all areas of the water industry.

Renewable energy investments create may job opportunities. According to European Defence Fund (EDF), green energy companies are able to offer more jobs per dollar invested. It develops 12 times faster than the whole US economy. In that regard, Neom will be one of the most significant projects as it creates 380,000 jobs. This construction of the trade and technology centre is expected to contribute $48bn to the state's GDP, as well.

This massive project in the centre of the Qatari capital will eventually produce one of the most eco-friendly city districts in the world. In this mega green city, 30 per cent energy reduction will be achieved due to the improved building envelopes of walls and windows, recessed windows, energy recovery to the outside air entering the building, optimised and a high-efficiency district cooling plant.

Qatar has been investing on its soft power with international projects, such as the FIFA World Cup. Yet, the Gulf country has been heavily criticised over its human rights record. Amnesty International has been urging FIFA to earmark at least $440M to compensate migrant workers in Qatar. Therefore, this sustainable city is quite vital for Qatar's soft power.

In 2016, the United Nations Economic Commission for Europe (UNECE) and the UN Habitat launched the initiative 'United for Smart Sustainable Cities' (U4SSC).  And, especially after the Covid pandemic wake up call, the drive to invest in smart sustainable cities has been accelerated by the governments. Masdar is a city to advance clean-tech innovation to commit low-carbon emission. The UAE put in seed money for the $20 billion cost to build Masdar City, according to a Bloomberg report.

As the UAE pumps out nearly 25 tons of carbon annually per capita, one of the highest rates in the world, the driverless electric vehicles that travel the streets of this pilot eco-city will be utopic and efficient to fight against climate change and this smart city will make UAE the queen of smart energy in Middle East, like Norway.

On the other hand, the citizens will be at the heart of the smart city. A real societal project, the city of tomorrow makes the citizen an active fighter against climate change. In order not to make the citizens feel like they are living in a science fiction novel, it is important to engage with the public and enlighten them about the benefits of smart cities, such as what the UAE plans to create for the future.

Within the aim of Nestle Global's to preserve the environment for future generations and enhance livelihoods of the informal sector, Nestle Egypt launched its initiative to collect and recycle plastic packaging waste. Through this initiative, the company is working to enhance the recycling ecosystem in Egypt. It has been established through collaboration between the Egyptian Ministry of Environment, CID Consulting and PayMob. They aim to motivate waste collectors in the informal sector to boost their collection capacity and ensure larger quantities reach PET processors. Despite the big chocolate factory and Nestle's child slavery issue, this initiative by the nutrition company will enhance the recycling ecosystem in Egypt. Yet, Egypt, as host country for COP27 this year, requires much hard work and dedication because the existing environmental challenges require the collective efforts from both the governmental and the private sectors.