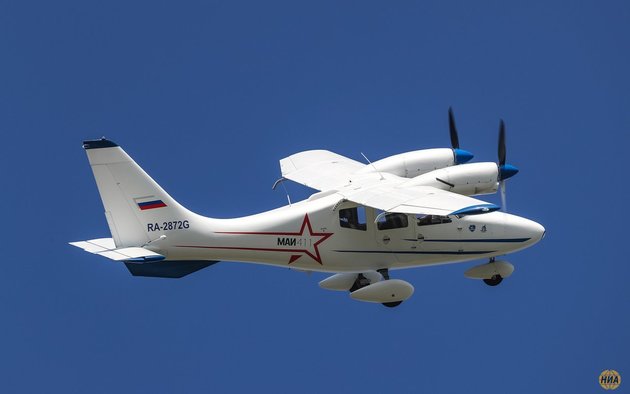 At the international military-technical forum "Army-2021" Dagestan manufacturers presented the aircraft "Alpha-KM" (MAI-411). The four-seater plane of the Moscow Aviation Institute and the Kizlyar Electromechanical Plant may be useful for the republic's sanitary aviation, the acting head of Dagestan Sergey Melikov told the forum participants.

According to him, the plane will also help in the fight against coronavirus infection. "This means delivery of vaccines, evacuation of patients with severe or moderate forms of the disease, delivery of doctors to the place of necessary medical measures," Melikov said. You can get to the high-mountainous regions of the republic by light-engine aircraft much faster than by car. The aircraft can reach a speed of 290 km / h, cruising altitude - up to 3 thousand meters.

Before the Army-2021 forum, experts checked the Alpha-KM in local conditions. It flew from the plain Kizlyar to the high-mountainous village of Machada in the Shamil region, located at an altitude of 2 thousand meters - the highest-mountainous runway in the region was built here. The flight lasted two and a half hours; by car, this route has to be done in six hours. Between Kizlyar and Machada there are about 300 km, while half of the way falls on the highlands.

Honorary President of the International Aviation and Space Salon, Hero of Russia Magomed Tolboyev, in his conversation with Vestnik Kavkaza, emphasized the special importance of small aircraft for the development of such a vast country as Russia. "We cannot do without such aircraft. It is impossible to develop Russia only thanks to cars and trains - not everywhere there are comfortable roads. Flying at the helm of military vehicles over many countries, I watched light aircraft, like butterflies in a meadow, flutter over the ground - there are a lot of them We need to study the experience of Canada, Alaska. We have a government decree on the development of small aircraft, but practical steps are also required, for example, the creation of a unified management structure for this system. Take the North Caucasus. There are many airfields, but some of them belong to the Federal Air Transport Agency, others to the Ministry of Defense, third local administrations. All of them need to be linked into one system. Develop a state program with funding. And then it will be possible to get from Makhachkala to Vladikavkaz not in six hours by car, but in an hour by a light-engine plane. Sergey Alimovich Melikov and I recently discussed this in detail question. He initiated the development of small aviation in Dagestan, and if the heads of neighboring republics, the North Caucasus can become an example for Russia in this pressing socio-economic issue, "- said the interlocutor of Vestnik Kavkaza.

Magomed Tolboyev clarified that the Dagestani production workers managed to make a significant step in the development of small aircraft: “The general director of JSC Concern KEMZ Ibragim Akhmatov did a lot to implement the project - I only helped him to establish professional relations with the Moscow Aviation Institute. aircraft with one engine, which were used for the needs of agriculture. This aircraft is already a passenger aircraft. Such aircraft is the future, but time must not be lost, otherwise other countries will occupy a niche. "

The light twin-engine aircraft "Alfa-KM" will be useful not only in the "country of mountains" (this is how the word "Dagestan" is translated from the Turkic languages). It will be irreplaceable in the steppes, deserts, in the taiga, in a word, where the automobile and railways have not yet run. In Dagestan, the tourism industry is pinning its hopes on the Kizlyar plane. Small groups of tourists can not only quickly move around the republic, but also make introductory flights over picturesque mountainous places. The aircraft will be able to carry out air patrols, engage in aerial photography and transport people.

"Alfa-KM" was developed in the Branch Special Design Bureau for Experimental Aircraft Building (OSKBES) of the Moscow Aviation Institute. In 2019, the aircraft was tested in accordance with FAP-118 and received a certificate of airworthiness for a single copy of the aircraft. It was featured in the flight program at the MAKS-2019 air show. The total investment amounted to about 200 million rubles.