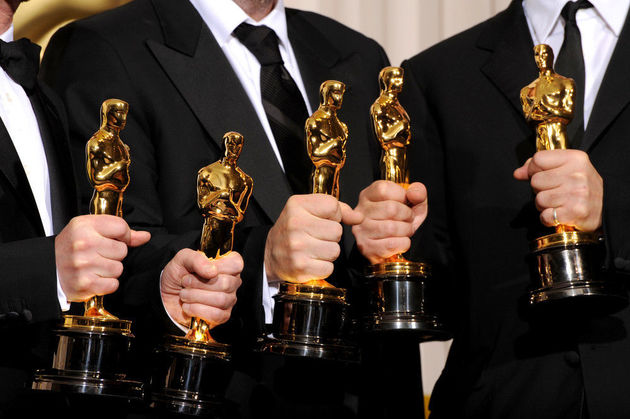 Ever since memes became a thing, awards shows have produced some of the best ones out there. (Meryl Streep shouting through cupped hands at the 2015 Screen Actors Guild Awards still has so many uses.) Sunday's Academy Awards were no exception. From singer Billie Eilish to director Bong Joon-ho, snippets of the stars found their way onto social media and made a splash, CNET reports in its article Oscars 2020 memes: Bong Joon-ho loves his Oscar and Billie Eilish looks horrified.

Presenters Maya Rudolph and Kristen Wiig broke into a little musical medley while presenting the award for best costume design, and for some reason, cameras cut to young singer Billie Eilish in the audience. The expression on Eilish's face quickly caught viewers' attention.

Wrote one Twitter user, "Billie Eilish's reaction to this bit turned me into a boomer filming a Facebook rant in my car."

Said another, "It's OK Billie Eilish, I *also* didn't like that bit." 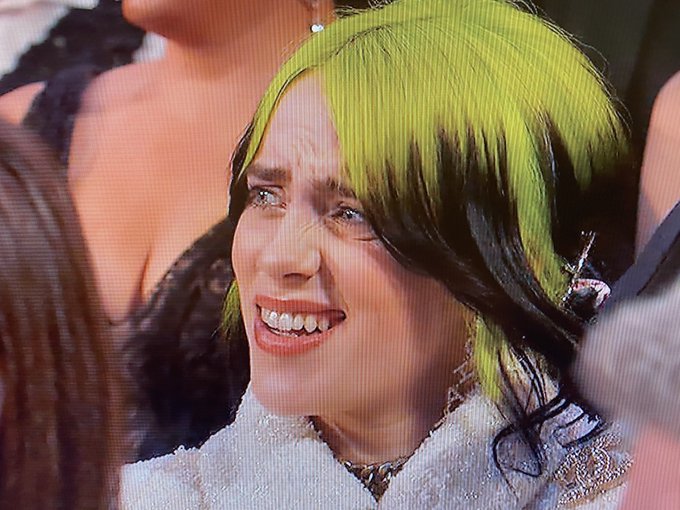 But some felt Rudolph and Wiig were hilarious. "Billie clearly never saw 'The Sweeney Sisters' on SNL, which is such a shame ... Her loss because Maya and Kristen are everything!"

And others were quick to defend the teenage singer for just getting caught with an odd look on her face. "People better not try to cancel billie for her reaction," wrote one Twitter user. "The internet is full of judgmental people who will misinterpret EVERYTHING!"

Rapper Eminem thrilled fans with his performance of "Lose Yourself," which won the Oscar for best original song for its appearance in the 2002 film 8 Mile. But not everyone was tuned in. Cameras caught legendary director Martin Scorsese seeming to sleep during Eminem's song. 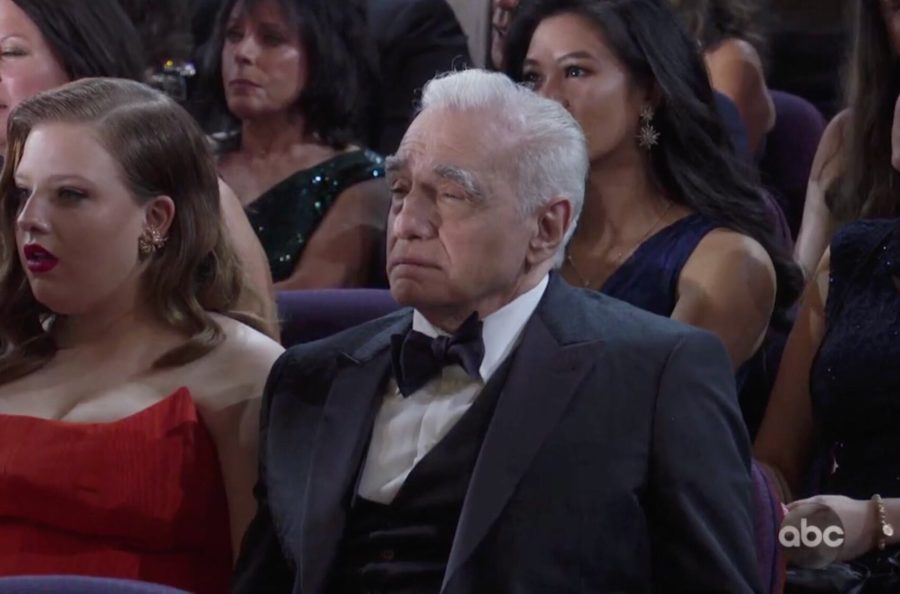 Said another Twitter user, "Why is Eminem performing?? What is the connection? Is it just to give us reaction shots of Scorsese reconsidering the life choices he's made that led him here?"

Another Oscar moment came earlier in the night when director Bong Joon-ho won the award for best original screenplay for his film Parasite. The cameras captured the director gazing at his award with sheer delight, and fans loved it.

"Bong Joon-ho admiring his Oscar is a vibe," one Twitter user wrote.

Said another, "I want someone to look at me like Bong Joon-ho looks at his Oscar." 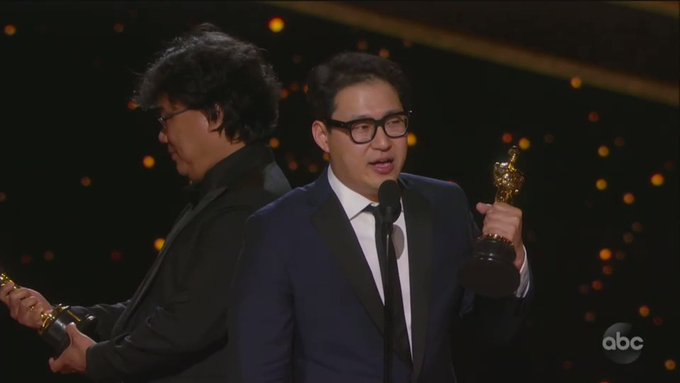 Oscar outfits always get social buzz, but usually, it's an exotic gown or two getting the attention. (And Natalie Portman's embroidered cape did make headlines.)

But also on Sunday, Timothée Chalamet hit it big for his shiny blue coat and pants that some thought made him look like he'd just gotten off work at an auto shop or service station. "Congrats Timothée Chalamet for his promotion to gas station manager," snarked the Twitter account for The Ringer.

"Oh, okay, I can stop wondering why the morose kid who works at the Texaco station is on a red carpet." 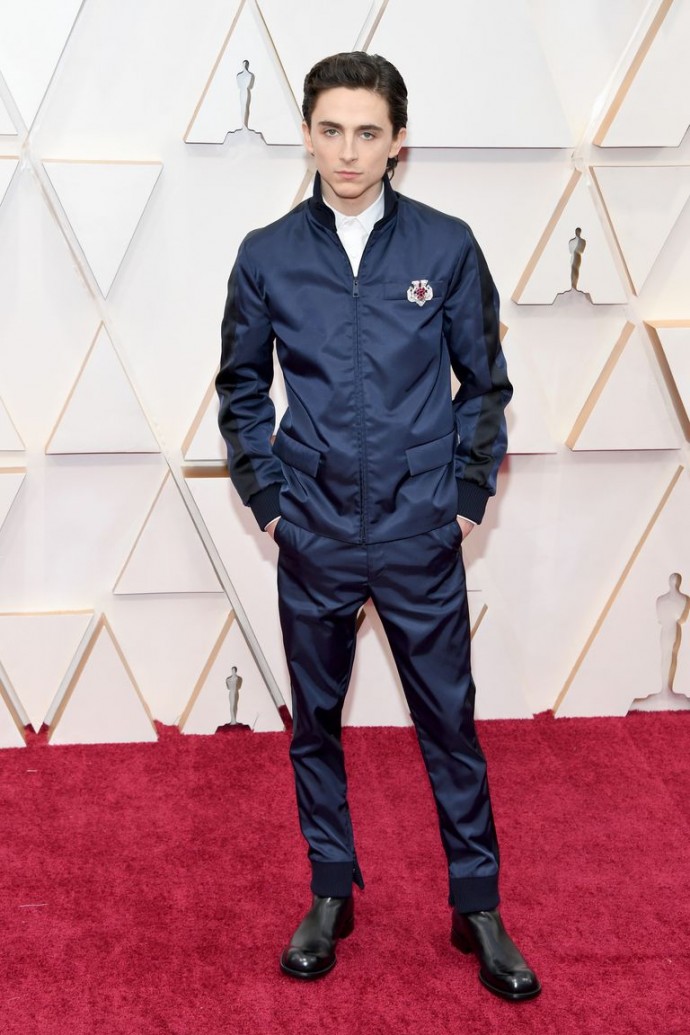 Julia Butters and her turkey sandwich

Even before the awards began, young actress Julia Butters, who appeared in Once Upon a Time in Hollywood, earned buzz for being prepared. Butters showed photographers she came with a turkey sandwich in her shiny pink purse. The LA Times reported that Butters brought a snack because "I don't like some of the food here."

"Well, duh. Whatda you think purses are for? Seriously, who among us hasn’t smuggled food into a movie theater by hiding it in our purse???" 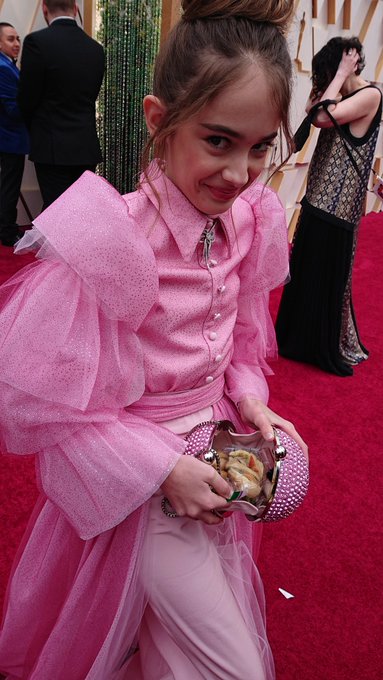