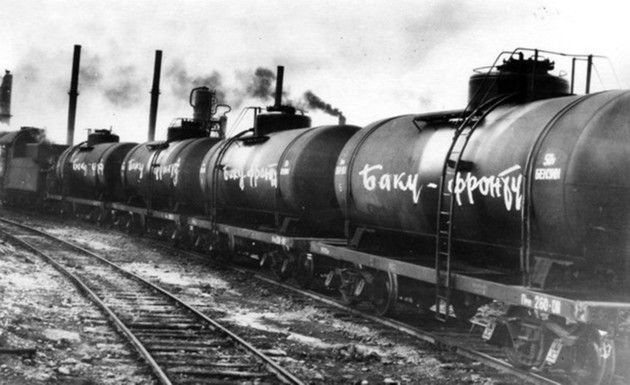 Participants in the Russian-Azerbaijani online conference "Our Common Victory in the Great Patriotic War", organized by the Institute for Political Studies, spoke about Azerbaijan's contribution to the victory over fascism.

"All the peoples of the Soviet Union made a worthy contribution to the fight against fascism, Azerbaijan did not stand aside. The fascists rushed to Baku, they were only 450 km away from the capital of Azerbaijan, and if it was captured, the USSR would be left with 2 million tons of oil and two refineries in Saratov and Ufa. Therefore, the contribution of Azerbaijani oil companies, which supplied a large amount of fuel to the front line, is quite serious," chief of the Milli Majlis Administration's military legislature sector Nizami Safarov said.

He also noted that during the war years, 600 thousand soldiers from Azerbaijan went to war, while the republic’s population was about two million: "121 men awarded with the title of Hero of Soviet Union. Azerbaijanis heroically fought in partisan detachments in Belarus, the Baltic states, Czechoslovakia, Hungary, Yugoslavia. Some of them were awarded the title of heroes of France and Italy. About 300 thousand people did not return from the war."

Nizami Safarov said that the memory of the war is carefully preserved in Azerbaijan: "On March 30, the parliament of our country instituted an anniversary medal '75 Years of Victory in the Great Patriotic War'. I emphasize - not in World War II, as it is called by individual states. We all lived in the Great Fatherland, we were part of this great Fatherland and together we defeated fascism through the efforts of all the Soviet peoples. Today we strongly condemn any attempts to rewrite history, distort the truth about the Great Patriotic War, attempts to glorify fascism and fascist criminals. Azerbaijan spoke openly on this subject and repeatedly voiced its position during all the forums. We cherish the memory of all those who died during the war. We need to protect this memory and keep it in our hearts."

State Duma deputy Alexei Zhuravlev recalled a well-known historical fact when Hitler was presented the cake on his birthday in 1942 with an oil rig and the inscription 'Baku': "Hitler bit off a piece and choked on it. He also choked on his treacherous plans to capture the Caucasus, stumbling upon the courage and heroism of the Red Army, in which Russians, Azerbaijanis, and representatives of other peoples fought side by side."

According to the Russian MP, there was no alternative for Baku oil in those days: "Four out of five planes, tanks, cars of the USSR were filled with gasoline made from Baku oil. The labor feat of the Bakuis is enormous. People worked around the clock, beating their own oil production records every month. It’s no coincidence that author of the Russian anthem Sergei Mikhalkov devoted capacious lines to Azerbaijan: "And cars cannot move in a formidable tank regiment if there is no gasoline from distant Baku in the tanks." USSR Marshal Georgy Zhukov said: "Oilmen of Baku gave front and the country so much fuel, necessary for defense of our Fatherland and for quick victory over the enemy." Marshal of the USSR Konstantin Rokossovsky insisted: "In every raid of Soviet tankmen, in every victory over the German  fascist forces, a considerable share of success belongs to the Baku oil workers." The people who fought on the front lines understood Baku's contribution to the common Victory."

Aleksey Zhuravlev noted that Azerbaijan was famous not only for labor feats, but also for military merits: "44 Azerbaijanis died in the first clashes for the Brest Fortress. In 1941, the population of Azerbaijan was 3.5 million, and 600 thousand went to the front, 300 thousand didn’t return. Women fought as well - 10 thousand fragile creatures carried all the hardships of war on their shoulders. This cannot be forgotten. We also remember the heroes of the Soviet Union. The first hero was assistant commander of a rifle platoon of the 42nd rifle regiment of the 180th rifle division of the North-Western Front Israfil Mammadov. Fighter pilot Huseynbalf Aliyev shot down six enemy aircraft near Leningrad, being mortally wounded, landed the aircraft without giving it to the enemy. Gun commander in the 3rd Rifle Battalion of the 309th Guards Rifle Regiment Mirza Veliyev, near Budapest, destroyed alone three German tanks, an armored personnel carrier, and a troop-carrying vehicle, he continued to fire until he was killed. Legendary hero of the French partisan movement Ahmadiyya Jabrayilov received several French awards, as well as was entitled to march in parades ahead of the generals."

"For services to the Motherland, over 400 thousand Azerbaijani soldiers were awarded orders and medals. 123 people were awarded the title of Hero of the Soviet Union. 14 became cavaliers of the Order of Glory of various degrees. Baku was a front-line city for 1418 days and nights of the war. Without Azerbaijan and its contribution there wouldn’t be this Victory. Therefore, we appreciate, respect and love the brotherly people of Azerbaijan," Zhuravlev said.