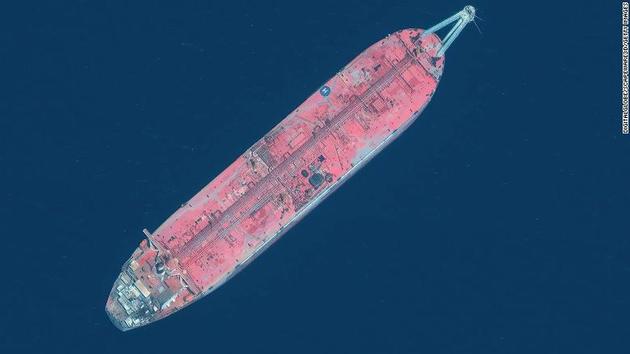 Time is running out to prevent a decaying tanker off the coast of Yemen from dumping its load of 1.1 million barrels of oil into the Red Sea, sparking an environmental catastrophe, the United Nations has warned. As CNN reports, concerns are growing over the condition of the SAFER FSO tanker, which has been stranded off the Yemeni port of Ras Isa since 2015. This week, the UN's environmental chief said the ship could release four times more oil than the Exxon Valdez spill in 1989 off Alaska if action was not taken.

"Time is running out for us to act in a coordinated manner to prevent a looming environmental, economic and humanitarian catastrophe," Inger Andersen told the UN Security Council on Wednesday.

Seawater flooded the aging tanker's engine room in late May and is threatening to destabilize the ship, according to the UN. Andersen said that "no effort should be spared" to conduct a "a technical assessment and initial light repairs" on the vessel.

But she added that in the longer term, the best option is for the oil to be offloaded from the ship, which would then be towed to a safe location for inspection and dismantling.

The international community will also have to come up with a response should an oil spill occur, she warned. The Exxon Valdez disaster damaged more than 1,300 miles of some of the most remote, wild shoreline in the United States, and the oil continues to pollute beaches and harm the ecosystem to this day.

Andersen said that neither war-torn Yemen nor its neighbors had the capacity to manage the consequences of such a large spill, which would wreck the biodiversity of the Red Sea and could affect the livelihoods of the 28 million people who rely on the inlet.

Yemen has been embroiled in a yearslong civil war that has pitted the Iran-backed Houthi rebels against a coalition backed by Saudi Arabia and the United Arab Emirates.

The rebels, who control the area where the ship is located, have given the green light for a UN team to assess the ship's condition and do initial repairs, the spokesman for the UN Secretary-General said Monday.

But questions remain as to whether the Houthis will allow the mission to go ahead, UN humanitarian affairs chief Mark Lowcock told the Security Council on Wednesday.

The rebels previously blocked UN inspectors from assessing the vessel in 2019, he said, despite asking the world body for assistance. The Houthis have however repeatedly blamed the Saudi-led coalition fighting them for preventing UN inspectors access to the tanker.

US Secretary of State Mike Pompeo, who has described the ship as a "ticking time bomb", called Wednesday for the Houthis to grant the UN access to the vessel.

"Imagine over one million barrels of oil seeping into the Red Sea -- ports unusable, fisheries decimated, Yemeni people without critical aid, and imports severed," he wrote on Twitter. "We call on the Houthis to live up to their commitments and facilitate UN assessments of the Safer oil tanker now."

According to the Houthi-run Al-Masirah news agency, the Houthi government wants to be able sell any oil extracted from the vessel -- which would be impossible due to international sanctions. The oil is estimated to be worth $40 million, according to Vessel Tracker.

The aging tanker had been converted into a floating storage platform before the war in Yemen started.