Türkiye hopeful for high-level talks in normalization with Egypt 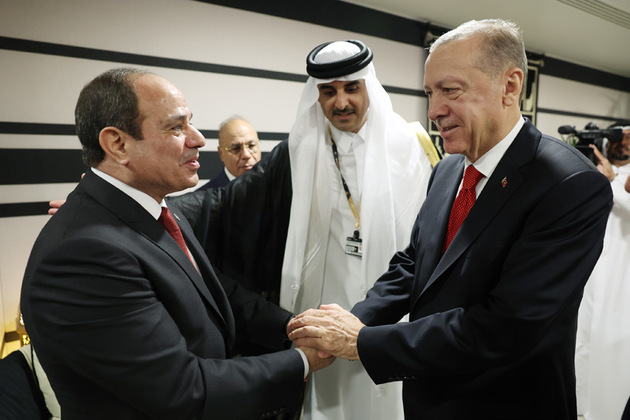 Türkiye aims to move a normalization process with Egypt that started with ministers to a higher level with high-level talks, President Recep Tayyip Erdoğan said Monday. Daily Sabah repots that speaking to Turkish press members on his return from Qatar where he attended the opening ceremony of the FIFA World Cup, Erdoğan evaluated his meeting with Egyptian President Abdel-Fattah el-Sissi.

"We said that a process can begin. A step has been taken here to start such a process and we have had good talks. It is my hope that we want to move a process that started with our ministers to a good point later, hopefully with high-level meetings. The relationship between Türkiye and Egypt is not a meeting of leaders, the past relations of the Turkish nation and the Egyptian people are very important to us. Why not again, why not start again? We gave a signal. Hopefully, after nothing extraordinary happens, we will take this step for the best," he added. He added Türkiye expects Egypt to establish peace together against those who take a stand against them in the Mediterranean. "With these talks, let us establish peace here against those who take a stand against us in the Mediterranean."

The president met several key Arab leaders, including Egypt's el-Sissi, at a reception held before the World Cup opening ceremony in the Qatari capital Doha on Sunday. President Erdoğan was accompanied by the host and Qatari Emir Sheikh Tamim bin Hamad Al Thani as they met other visiting heads of state, including Saudi Arabia's Crown Prince Mohammed bin Salman (MBS), el-Sissi, Jordan's King Abdullah II and Palestinian President Mahmoud Abbas and among others.

Erdoğan and el-Sissi met on Sunday in Qatar for the first time, a picture from the Turkish Presidency showed. Erdoğan briefly met, shook hands and talked to el-Sissi and other leaders.

Egypt and Türkiye have not deployed ambassadors since 2013 when relations worsened following the ousting of Egyptian President Mohammed Morsi by military chief el-Sissi, now the country’s president. Türkiye-Egypt ties have continued at the level of charge d'affairs since 2013. During this period, brief meetings were held between the foreign ministers of the two countries on various occasions. Meanwhile, the Turkish Embassy in Cairo and consulate in Alexandria, as well as the Egyptian Embassy in Ankara and Consulate in Istanbul, have continued their usual activities.

The normalization process between Türkiye and Egypt continues at a gradual pace. The two countries started consultations between senior Foreign Ministry officials last year amid a push by Türkiye to ease tensions with regional powers including Egypt, the United Arab Emirates (UAE), Israel and Saudi Arabia. Erdoğan said in July there was no reason high-level talks should not take place.

The president also hinted recently that Türkiye could revisit strained ties with regional countries, including Syria and Egypt, after next year's election. "We can reconsider ties with the countries that we have problems with," he was quoted as saying by Turkish media last week aboard the presidential plane while returning from a G-20 summit in Indonesia.

Erdoğan reiterated that Türkiye hopes to maximize its cooperation with Egypt and Gulf countries "on a win-win basis," at a time when Ankara intensified diplomacy to mend its fraught ties with Cairo and some Gulf Arab nations after years of tensions.