'We Need to Tax the Rich': Global Billionaires Have Grown $4 Trillion Wealthier During Pandemic 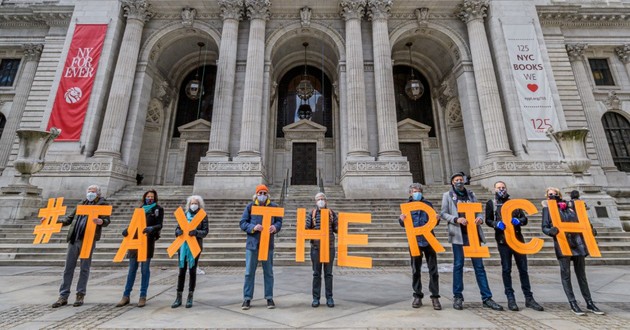 A new analysis out Thursday morning shows that the world's 2,365 billionaires have seen their collective fortunes grow by $4 trillion during the coronavirus pandemic, a staggering windfall that prompted demands for a global wealth tax aimed at curbing inequality and funding key priorities such as the lagging international vaccination effort, Common Dreams writes.

Conducted by the Institute for Policy Studies (IPS) on behalf of the Patriotic Millionaires and Millionaires for Humanity, the new report draws on data from several sources to demonstrate that the wealth of the planet's billionaires jumped 54% amid the global Covid-19 crisis and resulting economic collapse."Their combined wealth rose from $8.04 trillion to $12.39 trillion between March 18, 2020 and March 18, 2021," the report notes. "At the global level, the wealthiest 20 billionaires have a combined $1.83 trillion in wealth—with an increase of $742 billion, or 68%, over the pandemic year. In comparison, the 2019 GDP of Spain was $1.3 trillion."

Chuck Collins, researcher with the Program on Inequality at IPS, said in a statement that the enormous wealth billionaires accumulated during the pandemic "should be taxed to cover the cost of vaccinating the world and reducing inequality throughout the global economy.""Unless we tax the world's billionaires," Collins warned, "the legacy of the pandemic will be accelerated concentrations of wealth and power."If global billionaires had been required to pay an annual wealth levy modeled on U.S. Sen. Elizabeth Warren's (D-Mass.) proposed Ultra-Millionaire Tax—which calls for a 2% tax on assets over $50 million and a 3% tax on assets over $1 billion—"they would have paid an estimated $345 billion in wealth taxes," according to IPS.

"The annual revenue from this wealth tax would be more than twice the estimated $141.2 billion cost of delivering Cpvid-19 vaccines to every person on the planet," the group notes, citing cost estimates (pdf) from Oxfam International.With finance ministers from G20 nations set to meet next week to discuss the coronavirus-induced economic crisis and paths to recovery, Patriotic Millionaires chair Morris Pearl argued that a global wealth tax must be on the agenda.

"Taxing wealth has to be a key, central policy for all governments if we want to build beyond the skewed and faulty economic system we previously had," said Pearl. "The G20 finance ministers, and international finance institutions, need to foster a recovery beyond regressing to the same-old, same-old. We need to tax the rich."