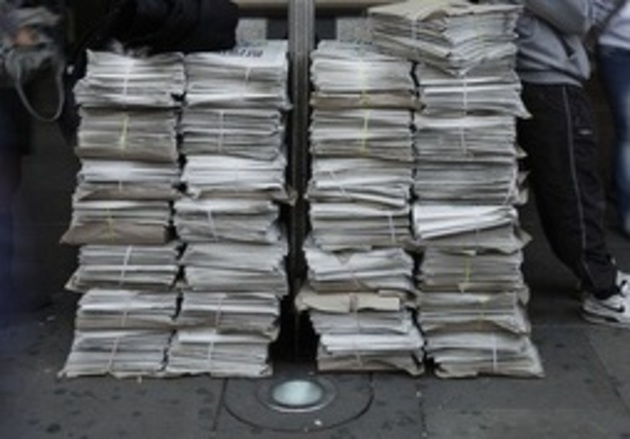 Russia today is top news in the New York Times. The top article is called “Russia to Support Some Top Banks Through Sale of Treasury Bonds: Finance Ministry”

The Russian Finance Ministry is ready to provide funds for some of the country's top banks and will make decisions on supporting other financial institutions later, a senior ministry official said on Wednesday.

Alexei Moiseev, a deputy finance minister, said Gazprombank, VTB and Russian Agriculture Bank, or Rosselkhozbank, will get cash from the sale of ministry's domestic treasury bonds.

A decision on supporting other banks will be made on an individual basis, Moiseev said, after taking into consideration their 2014 financial results.

Medvedev, whose country has been hit by Western sanctions over the Ukraine crisis that have aggravated an economic crisis, told a conference the central bank had all the instruments it needed to secure the stability of the rouble.

He said the central bank would not "eat up" Russia's foreign exchange reserves and ruled out capital controls. He said Russia did not want Ukraine to default but Kiev should pay its debts.

Oil prices -- the cornerstone of both the Russian and Venezuelan economies -- touched their lowest in almost six years and Maduro traveled this week to Iran, Saudi Arabia, Qatar and Algeria to gather support for his diplomatic push.

Maduro's call is supported by OPEC price bulls, such as Iran and Venezuela, who want output cuts from OPEC but can contribute little themselves. It has met a cold response from core Gulf OPEC producers.

Saudi Arabia rejected output cuts at the last OPEC meeting in November, saying it would only lead to a loss of market share. Gulf OPEC sources have said Saudi might consider cutting production if non-OPEC members, such as Russia, joined.

This year, Venezuelan and Algerian officials again initiated talks between Russia and OPEC, but officials in Moscow have said the country, in which around 40 percent of output is in private hands, would find it technically tough to cut.

Moody's Investors Service said on Tuesday there was a high risk Venezuela would default on its debt.

Russia depends for half its budget revenue on energy, while Venezuela depends on oil for 96 percent of its hard currency revenue, leaving its economy at the mercy of a market that has seen prices drop 60 percent since June to under $46 a barrel.

In the Associated Press today appears an article called “Merkel: Ukraine Summit Still Possible, but Unclear When”
German Chancellor Angela Merkel says she isn't giving up hope of organizing a summit with the Russian and Ukrainian leaders, but she can't say how long that might take after tentative plans for a meeting this week were scrapped.

Foreign ministers from Germany, France, Russia and Ukraine failed on Monday to achieve enough progress for a proposed summit of the country's leaders in Kazakhstan to go ahead.

Merkel said Wednesday that the idea of a summit remains on the table but "there must be enough hope of real results."

“Putin avoids Auschwitz anniversary event amid tension with Poland” says the Guardian.Russian president Vladimir Putin is to stay away from a major event at Auschwitz in two weeks, marking 70 years since inmates of the Nazi death camp were liberated by the Red Army.

A Kremlin spokesman confirmed that Putin would not attend the Auschwitz ceremonies, saying that the Polish government had not invited the Russian leader, while also admitting it was not up to Warsaw to issue invitations. The commemoration is organised by the international committee administering the site near Krakow in southern Poland. The committee includes Russian representatives. The Polish foreign ministry also confirmed it had not invited Putin, but it added that Moscow was welcome to send whomever it wished.

Auschwitz was the epicentre of the German genocide of European Jews, with about 1.5 million murdered in its gas chambers.

“North Korea's Kim Jong Un mulls Russia for his world debut” runs an article in today’s Daily Mail After three years of watching his fellow leaders mix and mingle while he was secluded in Pyongyang, Kim Jong Un is looking more and more likely to visit Russia in his first trip abroad since taking power in the world's first look at the young North Korean leader at work on the international stage.

Choosing Moscow for his first overseas trip would be a strong indication of the direction Kim wants to take his country. It would also provide the outside world with a rare look at a man who, while revered at the center of an intense cult of personality at home, is one of the biggest mysteries in international politics.

Today, North Korea depends heavily on China for economic support and backing in international forums such as the United Nations to oppose sanctions over its human rights situation and nuclear weapons program. But, increasingly wary of its reliance on Beijing, Pyongyang has been pushing hard to improve ties with Russia as a counterbalance.

Kim, who studied in Switzerland for two years when he was a boy and may have visited China when his father was still alive, has dropped other hints that with the traditional mourning period for Kim Jong Il past he wants to take a higher diplomatic profile.

An article in the Guardian about Iran is called “Iran reacts to oil price drop: 'They’ve made fools of us'. “When the world sneezes, we get cancer.” In the south Tehran neighborhood of Tir Dogholoo, beauty shop owner Hojat uses this idiom to describe the Iranian economy, which has taken yet another hit in recent weeks due to a dive in global oil prices. Struggling to curb inflation and stymie the impact of international sanctions, Hassan Rouhani’s government must now deal with a 50% drop in oil revenues while selling its austerity program to a grumbling and disenchanted public.

“They’ve made fools of us,” says Hojat. “They’re telling us to prepare for hardship, so that when it happens they can tell us ‘don’t say we didn’t tell you so.’ Not that we’re in a great situation to start with. That’s what happens in a country whose government is entirely dependent on oil money.”

The nosedive in global crude oil prices to around $50 a barrel places additional strain on next year’s state budget, which reckoned with a projected rate of $72 per barrel. The budget for this fiscal year, which ends in March, assumes a rate of $100 per barrel. While the general population has yet to feel the impact of the resulting spending cuts, it makes for foreboding news at the currency bazaars as well as supermarkets.

Stabilized at around 32,000 Rial as of mid-November, dollar prices have seen a steady increase on Tehran’s free currency market since early December, when they peaked at 36,000 Rial. Meanwhile, households are facing month-to-month increases in the prices of essentials like bread and medicine. Eshagh Jahangiri, Rouhani’s first deputy, recently admitted that the government had failed to properly communicate what impact the low oil prices will have on the nation’s economic policy and on people’s lives.

Among members of the business community, a common sentiment has been to blame the oil price drop on Saudi Arabia, often portrayed in newspaper headlines as Iran’s regional arch nemesis.

The New York Times published today an article called “Iran Condemns 'Provocative' New Charlie Hebdo Cartoon” Iran on Wednesday condemned the "provocative" publication of a new caricature of the Prophet Muhammad on the cover of French satirical weekly Charlie Hebdo, calling it an insult to Islam.

Foreign Ministry spokeswoman Marzieh Afkham says the publication of the cartoon "provokes the sentiments of Muslims the world over."

Iran has strongly condemned last week's deadly assault on the magazine's Paris office by Islamic extremists who killed 12 people, including much of the weekly's editorial staff and two police officers. Afkham said the attack was against Islam's teachings.

The issue of the magazine that came out Wednesday features an image of the prophet holding a "Je suis Charlie" ("I am Charlie") sign beneath the banner headline "Tout est Pardonné" ("All is Forgiven"). The magazine was to produce 3 million copies -- more than 50 times the usual circulation.

Islam forbids depictions of Muhammad or other prophets. Al-Qaida's Yemeni affiliate claimed responsibility for last week's attack, casting it as revenge for the magazine's earlier publication of caricatures of the prophet, which were deemed offensive.

In remarks on the sidelines of nuclear talks in Geneva, Iran's Foreign Minister Mohammed Javad Zarif called for mutual respect among different cultures.

The Washington Post today published an article “US, Iran hopeful on speeding up nuclear talks” The United States and Iran are expressing hope that nuclear talks can be accelerated in order to meet a March target for a framework agreement, as the countries’ top diplomats met Wednesday ahead of a resumption in full negotiations.

U.S. Secretary of State John Kerry and Iranian Foreign Minister Mohammed Javad Zarif were meeting at a Geneva hotel a day before negotiators from Iran, the five permanent members of the U.N. Security Council and Germany are to resume talks here.

Ahead of the meeting, Zarif said his talks with Kerry would show that both sides understand the importance of picking up the pace.

The U.S. and its partners are hoping to clinch a deal with Iran that would set long-term limits on Iran’s enrichment of uranium and other activity that could produce material for use in nuclear weapons. Iran says its program is solely for energy production and medical research purposes. It has agreed to some restrictions in exchange for billions of dollars in relief from U.S. economic sanctions.

The negotiators are trying to turn an interim accord into a permanent deal that would address international concerns about Iran’s nuclear program. In November, after failing to meet an earlier deadline, they set March as the target for a framework agreement and the end of June for a final pact.