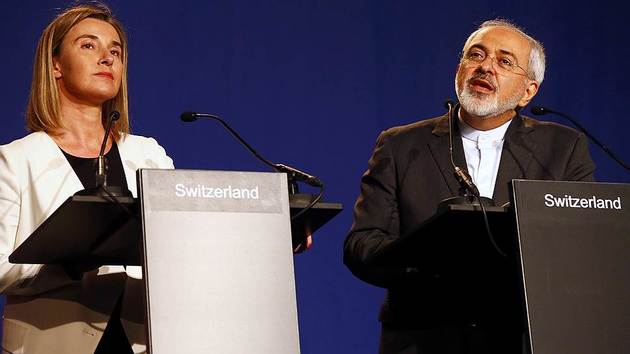 Recently the 5+1 group of international mediators and Iran signed the Joint Universal Plan of Actions in Lausanne. The document should help them to develop the final agreement on the Iranian nuclear program by the end of June 2015. The sides agreed that two-thirds of Iranian capacities for enrichment of uranium will not operate in 10 years. The EU will eliminate sanctions against Iran if Tehran fulfils the agreements reached. The USA will eliminate sanctions against Iran steadily, as long as Tehran is fulfilling its liabilities. Analysts worried that the elimination of sanctions will increase pressure on the oil market. But soon it became clear that Iran needs time to increase its oil exports. Yesterday, oil prices grew. According to experts, investors believed that Lausanne’s agreements won’t lead to excessive volumes of oil on the market.

Answering Vestnik Kavkaza’s question on changes in the world after the Lausanne agreements, Ilkham Shaban, the head of the Center of Oil Studies, said: “There are no changes for the world. They had already happened before the document was signed. The positive signal is reflected in the oil prices. On Thursday, oil prices grew, but then they fell. It means various circles are discussing further steps by Iran and possible prospects.”

The expert paid attention to the fact that the sanctions against Iran touched on not only the Western countries, but also “those who cooperated with Iran, for instance, SWIFT was shut down in Iran. Since 2012 great pressure has been put on Iran. Now, step by step, the situation will improve. Therefore, Western, Eastern, African and Russian companies will show their interest in Iran. Cooperation will be built with various sides. I would compare it with the early 1990s, when, after the dissolution of the Soviet Union, great opportunities were opened for the world.”

The director of the Center for Public Policy Research, Vladimir Yevseyev, is glad that the process of lifting the sanctions against Iran has been started. However, he is very afraid of excessive optimism: “The problems that we have now or receive in the future, were presented on November 24, 2013, when the countries signed a joint action plan. This joint action plan was not based on the basic principle, which has been offered by Russia's Foreign Minister Sergei Lavrov. He was talking about phasing and reciprocity. If you go back to the agreement, there was no reciprocity. It was an ultimatum to Iran, which was adopted. There was no mechanism movement from the first to the last stage. In the new document, there is no staging, no reciprocity either.”

Yevseyev reminds that “the administration of Barack Obama will leave in two years. Whoever comes to power in the White House - they would essentially be an opponent of Obama. This can be seen even now. For the first time Obama is being criticized by his own Democratic Party. Hillary Clinton is one of the harshest critics of Barack Obama. The same is observed in the Republican Party. Therefore, the most likely candidates for the presidency are  Hillary Clinton from the Democratic Party or Republican Jeb Bush, who will  come to the White House and try to raise their images by criticising Obama’s actions. It is very easy to use this document, which has not been ratified. This means that this agreement is not supported not only by Congress, but also a part of the ruling elite.”

Yevseyev stressed that the sanctions against Iran had nothing to do with either the nuclear program, nor the missile program. Because Iran had a policy, which the United States declared as 'supportive of terrorism'. “But now Barack Obama says that the sanctions that have been imposed against Iran for its support of terrorism would not be removed. But then it turns out that the whole package of sanctions that have been imposed against Iran, a significant part of them will not be lifted. Then we are talking about some of the US sanctions, which, pay attention to this please, will not be removed and will be suspended, because Congress will not allow it,” Yevseyev thinks.

According to the expert, the European Union can eliminate sanctions: “But it is easy to eliminate sanctions, as it is easy to adopt them again in the necessary conditions. Indeed, when there was a crisis, there was a danger of overlapping of the Strait of Hormuz, this issue was used to introduce sanctions against Iran. But now it is possible to create some other problem. For example, it is possible to close the strait so oil tankers will not pass through the Suez Canal. Iran will be blamed for this, it will be presumed that Iran wants to do this with the hands of the Houthis. Is this a valid reason for the introduction of new sanctions against Iran by the EU? I think yes. It is easy to manipulate the EU, as we see in the Ukrainian crisis. So, what is being done is certainly a step forward. I totally agree with you. But I do not see in this any solution to the Iranian nuclear crisis.”
5715 views
Поделиться:
Print: