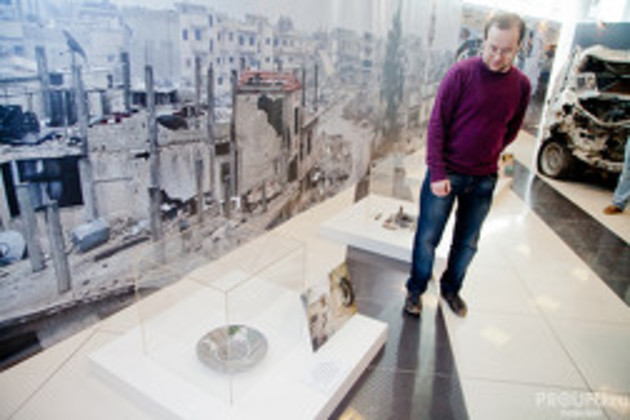 A photo exhibition titled “Material Evidence. Syria” is being held in the memorial complex of “Walk of Fame” in Grozny. About 60 pictures which depict military events are presented there; material evidence taken from the war-struck country is attached to photos: a blown-up mini-bus, a pane from a destroyed temple, a dummy which was used as a decoy to detect where a shooter is, and a small carpet… According to the ambassador of Syria to Russia, Riad Haddad, the goal of the exhibition is to present a real picture of the Syrian events.

“We appreciate very much a position of the Chechen authorities toward the developments which are happening is Syria, first of all, Ramzan Kadyrov’s position. He supports the Syrian people, and I think it is useful to remind that one of the most dangerous goals of the war in Syria, which continues for three years, is an attempt to misinterpret true Islam and associate it with terrorism. International forces stand behind this; they try to dissolute the Middle East and the whole world. Activity of terrorism groups, their crimes and murders of peaceful citizens turn into a weapon in hands of their sponsors who would use the weapon against Islam and the Muslims,” Haddad said.

He is sure that “honest Chechens shouldn’t allow certain forces use ignorance of common people to attack Islam and accuse it of the fact that this a religion of terrorism and murders. True Chechens won’t allow them associate the Chechen people with terrorism, as the Chechens are honest and peaceful people who preserve human values. It is strange that those who urge to struggle against terrorism feed it by another hand in their interests… Islam cannot be a religion of terrorism.”

The authors of photos presented at the exhibition are photographers from Ufa, Khalit Safin and Aybulat Akbutin. They spent two weeks in Syria. They shot various sides of life in modern Syria – from checkpoints, snipers’ nests, and destroyed buildings to operating mosques, schools, and cinemas. “We realized that in Grozny many people saw such material evidence. We visited Moscow, Ufa, the next stop is Kazan. People haven’t seen a war there, they don’t know how such things look like. The exhibition gives an opportunity to feel the situation, to realize that terrorism is evil. People feel it close to them, for they should appreciate peace,” Khalit Safin told Vestnik Kavkaza.