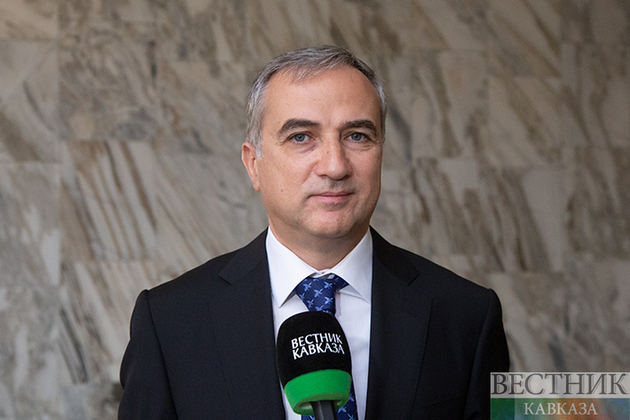 In Karabakh, near the post of Russian peacekeepers on the Khankendi-Shusha road, there's the fifth day of Azerbaijani environmental activists' uninterrupted protest action. The protests are against the damage to the environment and property of Azerbaijan made by illegal mining in the temporary deployment zone of the RMC. The peacekeepers continue to block the Lachin road, while the protesters allow all passing cars to pass. Vestnik Kavkaza spoke with Farid Shafiyev, chairman of the board of the Center for Analysis of International Relations, about how this situation fits into the global geopolitical context

- The Lachin issue currently consists of three components: ecology, security, including transport security, and the absence of a peace treaty between Azerbaijan and Armenia. In your opinion, what problems must be solved to stop the protest action?

- In this case, since we are talking about ecology, the main problem is the illegal exploitation of our natural resources and their export from Azerbaijan through the Lachin corridor. If at least this issue can be resolved, the situation will improve.

You correctly noted that the Lachin issue consists of three components. The first component is environmental problems: environmental damage and illegal exploitation of resources. The second one is a security issue, as the Lachin corridor is being used for purposes contrary to the Tripartite Statement of November 9-10, 2020. It is known that military cargoes are transported through it, the Armenian military uses it. Azerbaijani property is being illegally exported through this corridor too. The third component is Yerevan's failure to fulfill its obligations. Azerbaijan has assumed obligations on the works on the Lachin corridor. The Armenian side works on the Zangezur corridor, but it does nothing to launch it. It is impossible that Azerbaijan alone should fulfill bilateral agreements. Therefore, all these three components should be solved in the future.

- If Russia convinces Armenia to regulate relations with Azerbaijan completely, how will this affect Russian positions in the South Caucasus?

- Azerbaijan, Armenia and Russia have many common issues, especially in the field of transport and economy, which will be resolved and developed upon the normalization of Armenian-Azerbaijani relations. There is an understanding of Russia's importance as a geostrategic partner both in Azerbaijan and Armenia, especially among the elite. Therefore, a peace treaty, if it is really aimed at resolving all issues without exception now and forever, will allow Russia to receive large political and economic dividends.

- To what extent is the strengthening of Turkish position in the region related to the delay in the Karabakh issue's resolution?

- This is an absolutely correct question. I am often asked whether Türkiye has strengthened its position in the South Caucasus because of Russia's delay in the resolution of the Karabakh issue. Azerbaijan still feels a threat to its sovereignty and territorial integrity from Armenia. Therefore, until this factor is removed, Türkiye and Azerbaijan will only strengthen their cooperation. Consequently, Türkiye will be strengthening its positions in our region.

- What benefits will the normalization of relations with Azerbaijan bring to Armenia?

- If we look at the geo-economic situation in the region, now all the main transport and energy projects bypass Armenia. Armenia's two borders are still closed. These borders are with Türkiye and Azerbaijan. The third one with Iran does not provide a full access to the world economy, because Iran itself is under sanctions. Georgia is left. At the same time, Armenia, being a member of the EAEU, constantly faces problems of transport access to Russia due to the instability of the Georgian Military Road. Therefore, the opening of communications and borders will allow Armenia to fully use its regional potential, join the regional economy and thus into the world economy.

- In your opinion, why is the European Union interested in peace between Azerbaijan and Armenia? And is Baku ready to have a dialogue with Yerevan on the European platform?

- This dialogue has actually been taking place since December 2021, when there was the first trilateral meeting under the auspices of Charles Michel. Armenia has concluded an agreement with the EU. Azerbaijan is working on an agreement because the EU is a very important economic partner. Humanitarian ties in the field of education are also important.

The EU wants peace because the absence of peace is harmful. First of all, people's lives are at risk. In addition to this, damage is done to the economies of countries, as a huge amount of money is spent on weapons. At the same time, the economic future of Armenia is in question. The EU has interests in Azerbaijan in the field of transport and energy. All these factors contribute to the fact that the EU would like the issue to be settled.

Here I would like to quote the words of Andrey Kortunov, Director General of the Russian International Affairs Council. He notes that when it comes to the EU and Russia, despite the very difficult situation around Ukraine and the fact that the EU and Russia are on opposite positions, then perhaps they should abandon the zero-sum game in the South Caucasus region. This is his idea: Russia and the EU can complement each other in this region.

- At the same time,  we see more competition between the Russian and European settlement formats now. If Russia becomes the country that has achieved peace in the South Caucasus in the course of this rivalry, how much will this strengthen its image?

- Naturally, the state that will ultimately contribute to peace will be tied to political and other issues of the future life of our region.

Ecologist Gamza Yusifova: "Our action on the Lachin road is not political"