"We argued with him over Huntington". The former rector of the Diplomatic Academy speaks about Tokayev's personality 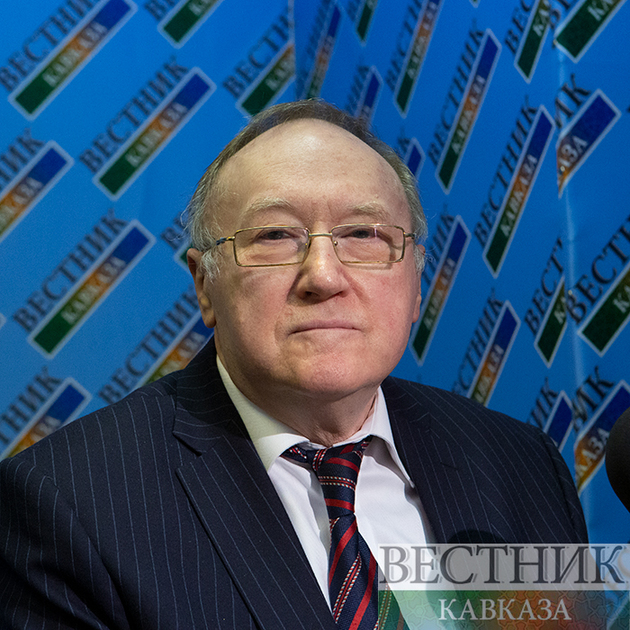 Honored Scientist of the Russian Federation, former rector of the Diplomatic Academy Yevgeny Bazhanov spoke about his vision of the protests in Kazakhstan and the personality of President Kassym-Jomart Tokayev in an interview with Vestnik Kavkaza's correspondent Kamran Hasanov.

- The day before, after a long silence, the former president of Kazakhstan, Nursultan Nazarbayev, spoke and said that there is no internal confrontation in the country. But we see that Kassym-Jomart Tokayev dismissed Elbasy's nephew from the post of Deputy head of the National Security Committee...

- Nazarbayev's support for Tokayev will serve to normalize the situation in Kazakhstan. There is no personal confrontation between them, but there were many people in Nazarbayev's circle who ignored and interfered Tokayev with his work. These people played a negative role during the unrest: they either did nothing or fanned the fire. They expected that they would have power and that Tokaev would retire [from the political arena]. Other representatives of the "big family" and the government were also fired. Head of security Massimov and 10 other people were arrested.

- Do we understand correctly that when Nazarbayev handed over power to Tokayev in 2019, key people in the Kazakh government were dissatisfied with this and tried to overthrow him now?

- This is the first thing. And the second one is that they didn't want to change anything, Tokayev began to fight corruption and carry out reforms. This was unprofitable for them, because it hurt the interests of people associated with oil capital. Tokayev came with a program of reforms. He has rich international experience. He worked in Singapore and China, studied South Korea, Japan. He wanted to use the best that Asia has, but he was blocked. As a result, these contradictions have accumulated in society. Those who were close to power and dissatisfied with Tokayev decided to use the protests to create chaos.

- Will the stability be preserved?

- To do this, Tokayev needs to engage in reforms seriously, creating a wide team of specialists for this.

- You are quite familiar with Tokayev. In your point of view, what kind of person is he?

- He graduated from MGIMO. He is a brilliant sinologist. He studied and worked in China, then worked in Singapore. He translated for the top leaders of the USSR, he was theoretically a very strong person on the topic of relations with the PRC. Then he graduated from the Diplomatic Academy, and when the USSR collapsed, he went to Kazakhstan and was in the forefront of Kazakhstan's independence. He headed the Foreign Ministry and began to build a foreign policy with Russia, China, Europe, the United States and the Muslim world from scratch. It was necessary to learn to negotiate with everyone - and he did this not only in practice, but also in theory. Tokayev is the author of dozens of works on the foreign policy of Kazakhstan and international relations. In 2001, he defended his doctoral dissertation at the Diplomatic Academy, and I was a consultant during his defense. Now you rarely find a state that gets along with everyone. And this is Tokayev's achievement for Kazakhstan.

Then he was appointed Deputy Secretary General of the UN, where he dealt with the Iranian nuclear program and the European security. The whole world knew his name. He was known more internationally than in the post-Soviet space. For a number of years he was the Prime minister and Head of the Senate of Kazakhstan. He knows very well the experience of reforms in China, Singapore, South Korea and Switzerland, where he also worked. Tokayev is a man of democratic convictions.

- Did Tokayev have ambitions for power? Is he a powerful man?

Those who defended scientific works in our Diplomatic Academy have taken prominent positions. Kim Dae-jung did that and became the president of South Korea. Alexander Dzasokhov became the president of North Ossetia. Anatoly Torkunov became the rector of MGIMO. Tokayev had nowhere else to grow. Once I said: "It would be nice if Tokayev became Secretary General of the UN, which has never been headed by a person from the post-Soviet space." Time passes, and Nazarbayev nominates Tokayev for the post of UN Deputy Secretary General. Tokayev ended up working there. And in the Diplomatic Academy, he dismissed this prospect (to become the president of Kazakhstan - ed.). You see, in the end he took up this post.

- What is his attitude towards Russia?

- Objectively, any leader of Kazakhstan will strive for normal relations with Russia, because of: a) the longest border, b) history, c) Russian-speaking population, d) economy and e) security. Tokayev was afraid that the country would fall apart and turn into Afghanistan, so he turned to Moscow. There is also a subjective factor: he studied at MGIMO, defended his doctoral dissertation at the Diplomatic Academy. His family roots are connected with Russia, Tokaev has a Russian wife. He knows brilliantly what is happening in Russia, he knows what is happening in our theaters and how our football teams play. He has a second love - Russia. Tokayev is a very erudite person. He is drawn to knowledge. And if a book on foreign policy is published somewhere in the USA, he has already read it.

- Which of the famous people did he admire?

- I think he treated Gromyko with great respect and quoted him. He also respected the former chief Ban Ki-moon. As for the scientists, it is Samuel Huntington. Tokayev treated his works with great respect. We even argued.

Islam Kuraev: "Everyone will benefit from the development of Kazakhstan's relations with Turkey and Azerbaijan"