Aleksandr Bashkin on Astrakhan region's contacts with its Caspian neighbors

The member of the Federation Council Committee on Constitutional Legislation and State Construction, the senator from the Astrakhan region, Aleksandr Bashkin, was a guest of Vestnik Kavkaza program Tribune today. He spoke about the current state of the region and its contacts with its Caspian neighbors.

First of all, the senator stressed the special geographical situation of the Astrakhan region, which requires it to cooperate actively with the Caspian states. "The Astrakhan region is the so-called Caspian capital of Russia, which requires us to comply with the general vector of development of the Russian foreign policy based on non-interference, good neighborliness and cooperation in the economic, social, cultural, scientific, tourist and many other areas. This is a policy of joint struggle against terrorism, political and religious extremism," he noted.

In this regard, the national offices of the Caspian countries in the Astrakhan region are well developed. "The Kazakh National Cultural Society, as well as Iranian, Turkmen and Azerbaijani ones play an active and highly visible role," Alexander Bashkin said.

The member of the Federation Council Committee on Constitutional Legislation and State Construction also told about the relations between the Astrakhan region with Azerbaijan. "Our relations are very actively developing and strengthening, especially in the field of education. Every year the number of Azerbaijani students studying in Astrakhan universities increases, to date, there are about 800 people," he pointed out. 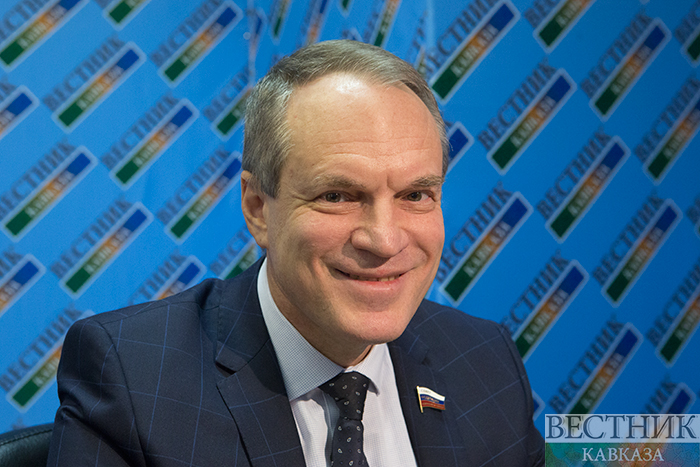 Azerbaijan and the Astrakhan region are also linked by many other humanitarian projects. "For example, the school №1 was reconstructed and named after Heydar Aliyev. The central park named after Heydar Aliyev was equipped, the 'Friendship' kindergarten was built. Baku gave Astrakhan the bridge, which was symbolically named the 'Friendship Bridge'," Alexander Bashkin recalled.

The Astrakhan region also cooperates with Turkmenistan. "The development of bilateral relations between the Astrakhan region and Turkmenistan is based on the cooperation agreement, which was signed in 2008. But our relations are primarily dictated by the geographic and ethnic proximity, common cultural and historical sources. Over the years, joint economic projects in shipbuilding, as well as projects in the fields of health, science and culture were successfully implemented," the senator said. 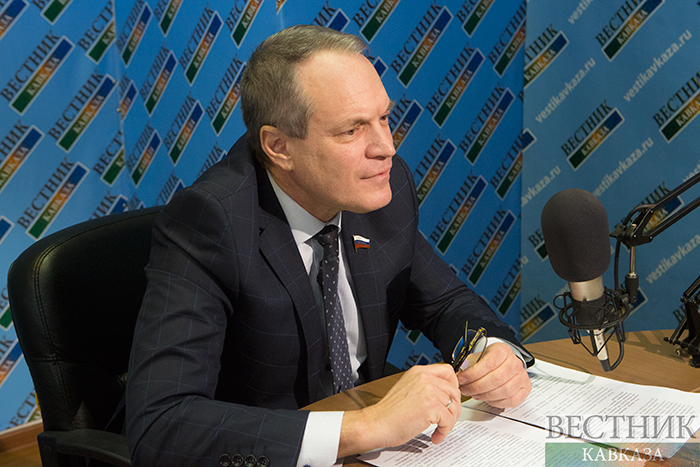 "In 2017 we plan to build a trade and logistics center in the Astrakhan region, which will deliver Turkmen goods to the Astrakhan region and other subjects of the Russian Federation. We are actively working on the issues of establishing a regular cargo maritime traffic between the port of Turkmenbashi and the Astrakhan port Olya. The negotiations on the establishment of direct air communication between Ashgabat and Astrakhan are almost completed. The possibility of participation of Turkmen economic residents in the special economic zone 'LOTUS' in the Astrakhan region is being considered," Alexander Bashkin listed examples of the Astrakhan-Turkmen cooperation.

"The contacts with Turkmenistan have began developing actively in the second half of the 2000s. We are optimistic about the development of relations with Turkmenistan, and those projects I mentioned confirm this," the member of the Federation Council Committee on Constitutional Legislation and State Construction noted.

"Direct confirmation of really active relations with our neighbors is consular offices of almost all neighboring countries in Astrakhan. There is the Consulate of Kazakhstan, the Consulate of Turkmenistan and the Iranian consulate were recently opened, the talks on the opening of Azerbaijan's consular office are at the final stage ," the senator from the Astrakhan region concluded.