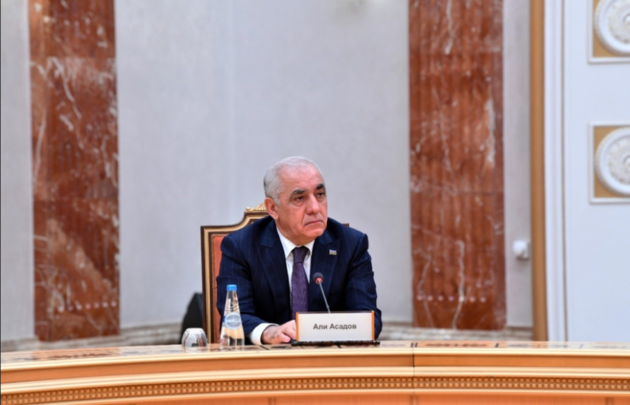 Azerbaijan supported the proposal put forward by the Russian side to establish a trilateral commission on delimitation and demarcation of the state border between the Republic of Azerbaijan and the Republic of Armenia, the Prime Minister of Azerbaijan, Ali Asadov, said, speaking at a meeting of the Council of Heads of State of the CIS in Minsk.

He recalled that after gaining independence, Azerbaijan carried out delimitation and demarcation with neighbouring countries - Russia, Iran and Georgia - in accordance with international legal norms. "Delimitation and demarcation of the border with Armenia were impossible due to the fact that the territory of the Republic of Azerbaijan was occupied by the Armenian armed forces," AZERTAC quotes the head of the Cabinet of Ministers as saying.

Ali Asadov noted that now, as the hostilities are over, Azerbaijan has begun to create its border infrastructure and is ready to resolve the issue of drawing the border with Armenia in a constructive manner.

The Prime Minister stressed that in this regard, Baku supported Moscow's proposal to establish an appropriate trilateral commission on the delimitation and demarcation of the border between Azerbaijan and Armenia. He added that the definition of borderlines is a technical process that must be based on an international legal basis.

The Prime Minister also expressed Azerbaijan's commitment to supporting sustainable peace and security in the region, including the normalization of the post-conflict situation and the settlement of all issues by diplomatic means in the context of the conscientious observance of the November 9 and January 11 trilateral statements provisions.