Another tanker briefly runs aground in Suez Canal 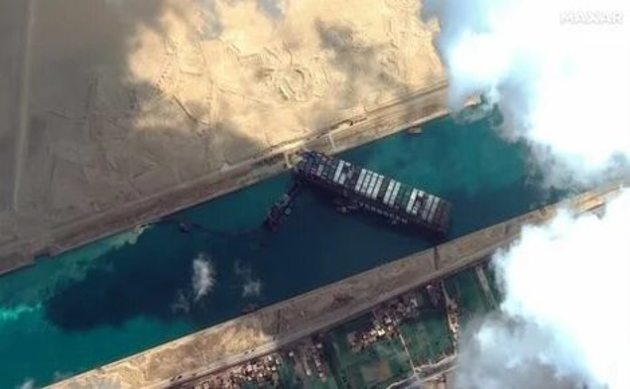 Another ship has briefly run aground in the Suez Canal, an informed source said.

"Indeed, the ship ran aground a little, but the incident is over and the ship is already underway," the source said, adding that it would take "30 minutes at most" to restore movement in the canal area.

The new incident took place in the canal's southern portion, almost completely blocking traffic through the waterway, the source added.

Footage of canal traffic by MarineTraffic showed ships loitering in a narrow stretch of the canal area Tuesday afternoon Cairo time, with tugs including the Mosaed 3 rushing to help the Minerva Nike, a crude oil tanker sailing under the flag of Greece. The Rumford, another crude tanker, could be seen stopped directly north of the Minerva Nike, reporting engine trouble.

As of 12:30 pm GMT, the Minerva Nike was registered using its engines, sailing at 10.7 knots northward. The Rumford resumed its passage through the an hour and fifteen minutes earlier.

Tuesday's incident was a brief taste of the catastrophic blockage of the Suez Canal that played out between 23 and 29 March, when the Ever Given, a 400-metre-long Japanese-owned, Panama-registered, German-managed, Taiwanese operated container ship, wedged itself into the waterway after speeding through the canal in high winds, Sputnik reported.