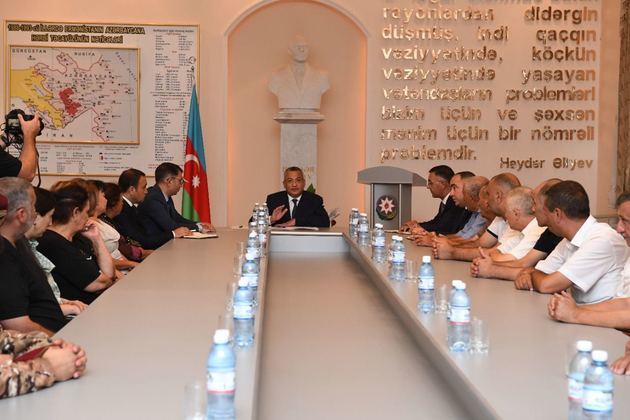 State Committee for Affairs of Refugees and Internally Displaced Persons (IDPs) of Azerbaijan held a meeting with a group of residents of Zabukh and Sus villages of the Lachin district liberated from Armenian occupation, according to the committee press service.

According to the committee, the meeting participants paid tribute to the martyrs, who gave their lives for the liberation of the country's lands and the restoration of its territorial integrity, with a minute of silence.

During the meeting, it was noted that the Azerbaijani president gave orders to prepare for the return of the residents of Lachin city, Zabukh and Sus villages, who were IDPs for about thirty years.

Expressing satisfaction with the work done over the past period to improve the living conditions of internally displaced persons and strengthen their social protection, the participants of the meeting emphasized their gratitude to President Ilham Aliyev, First Vice President Mehriban Aliyeva for their attention and care, and also for the start of preparations for their return to their native places.

The Committee Chairman informed the meeting participants in detail about the progress in fulfilling the instructions of the head of state on the restoration of the liberated territories, the beginning of the return of IDPs to their native lands. He noted that the structural divisions of the committee are engaged in the implementation of measures related to the organization of the return to Lachin city, Zabukh and Sus villages.

The chairman also noted that surveys are being conducted to clarify the number of former IDPs, assessing their employment opportunities, and the necessary measures are being taken to effectively organize the resettlement of former IDPs to the native places.