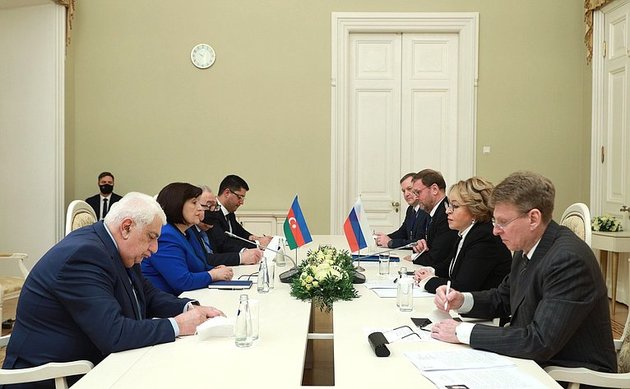 The parties discussed the development of Russian-Azerbaijani relations and the expansion of parliamentary interaction at international platforms.

Valentina Matvienko drew attention to the fact that cooperation between Moscow and Baku is steadily developing, which suits the interests of the peoples of both countries. "The tone of cooperation is set by intensive personal contacts between the presidents of the two countries, Vladimir Putin and Ilham Aliyev," she explained.

The speaker of the Federation Council described the dialogue between the legislators of Russia and Azerbaijan as active and fruitful, she explained that systematic work is underway to implement the agreements worked out at the highest level, the purpose of which is to develop the entire spectrum of bilateral cooperation.

At the same time, Matvienko noted the great importance of enhancing contacts through the Interparliamentary Commission on Cooperation between the Federation Council and the Milli Mejlis.

In turn, Sahiba Gafarova spoke about the active work of Azerbaijani parliamentarians at the IPA CIS platform. The Azerbaijani politician also drew attention to the importance of the Conference "Universal Health Coverage and Sustainable Development Goals" organized by the IPA CIS.

In addition, the parties pointed to the important role of the Interparliamentary Assembly of the CIS countries, which will celebrate its 30th anniversary in 2022. Next year, visiting sessions of the IPA CIS will take place, including those timed to coincide with its anniversary, Valentina Matvienko specified.

The Speaker of the Federation Council and the speaker of the Milli Mejlis also discussed the post-war settlement of Azerbaijani-Armenian relations, bilateral cooperation in the fight against the coronavirus pandemic.

The meeting was attended by Deputy Chairman of the Federation Council Konstantin Kosachev.