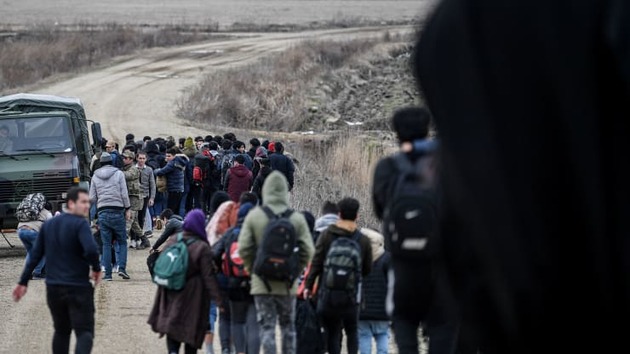 Hundreds of Afghans left Ramstein Air Base late Saturday as flights to the U.S. resumed following a three-week pause imposed after measles cases were confirmed among evacuees.

"We really are excited to be finishing up this herculean effort," Ramstein installation commander Brig. Gen. Josh Olson told Stars and Stripes. "It's taken much longer than expected but it’s an awesome ending to what's been quite an effort, quite an opportunity - the world's largest airlift for 124,000 people."

Around 300 evacuees were on board the specially chartered Omni Air International flight that left Ramstein, bound for Philadelphia,  Stars and Stripes writes.

Officials at Ramstein expect to fly around 1,000 evacuees a day to the U.S. in the coming days, meaning the roughly 9,000 Afghans who have been housed in hastily erected camps at Ramstein and nearby Rhine Ordnance Barracks should all have left Germany in a little over a week.

The first evacuees arrived at Ramstein at the end of August after U.S. bases in the Middle East that were temporarily housing them reached capacity. Among those airlifted out of Afghanistan were American citizens, legal residents, Special Immigrant Visa holders, and their families.

But in mid-September, flights were abruptly halted when four measles cases were discovered among Afghans who had arrived in the U.S. from overseas bases.