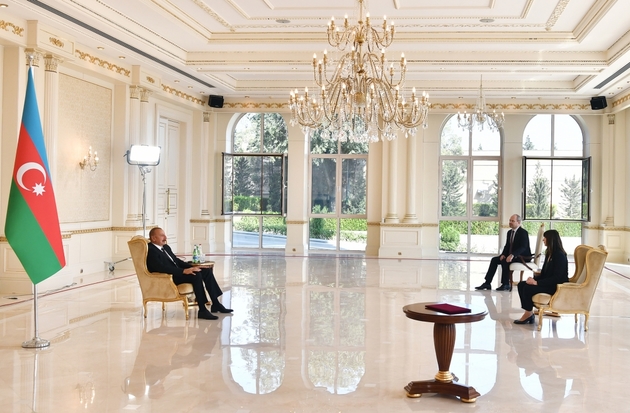 28 years of the Minsk Group were the years of lost opportunities, President of Azerbaijan Ilham Aliyev said, as he received the newly appointed United Nations Resident Coordinator in Azerbaijan Vladanka Andreeva on August 24 in Baku.

The Azerbaijani leader noted that within their capacity and our potential they try to contribute to the cause of peace and security. "With the United Nations, our active interaction with institutions started as a result of Armenian aggression, and 1993 was a year when those famous resolutions of the Security Council were adopted, which were very positive step, very promising gesture of support, and addressing the Armenian aggression. The demand for immediate, full, unconditional withdrawal of Armenian troops from our internationally recognized territories was a very important political gesture of the Security Council," AzerTAc cited him as saying.

"But unfortunately, these resolutions were not implemented and as you probably know, many times I personally raised this issue that there is no mechanism of implementation of the Security Council resolutions. In one case, they were implemented short period of time but in our case, they were not implemented at all by international players. Especially what was of concern and was difficult to understand by Azerbaijani society that those who adopted those resolutions, three out of five permanent members-states were the countries which were and still are the co-chairs of the OSCE Minsk Group. So, they themselves adopted those resolutions and they had a mandate to facilitate implementation of these resolutions. But unfortunately, 28 years of the Minsk Group were the years of lost opportunities," Ilham Aliyev recalled.

"On many occasions I raised the issue of imposing sanctions on Armenia. Because I thought that could be a way how to avoid confrontation, avoid war. We wanted to resolve this issue peacefully. Speaking last year at the General Assembly just several days before the war, I was warning international community that Armenia is preparing for war, that these were not just words for the sake of propaganda. That was a realistic analysis of Armenia’s behavior in the months prior to the war. And unfortunately I was right. If sanctions were imposed on Armenia on time, if Minsk Group co-chairs - three leading countries of the world used five percent of their potential to persuade or to force Armenia to withdraw its occupational forces then the war would not have happened," he noted.

"Therefore, the responsibility for the war is not only lies on Armenia but on those who could not or did not want to force them to comply with the international law. Therefore, Azerbaijan implemented these resolutions itself, within international law norms. We restored justice, we restored international law norms. We implemented the United Nations Security Council resolutions ourselves and we acted in accordance with UN Charter. Chapter 51 recognizes the right for every country for self-defense. So, we used all the existing international instruments to restore our territorial integrity," the Azerbaijani President stressed.

"So now the war is over, the conflict is resolved, there is nothing to talk about what happened. We need to look to the future and of course, our main concern now is a restoration of destroyed territories which are in full devastation. Of course, we count on the future cooperation with the United Nations on these issues, issues related to humanitarian situation, issues related to our plans with the restoration of the liberated territories. Of course, we will need more interaction with UN institutions," the head of state added.

"As you probably know we also are in contact with UNESCO, and we have been waiting for UNESCO for almost 30 years. I don’t know whether you know it or not, a couple of years ago, last time when we invited UNESCO to come, that was of course, the time of occupation, to come and to see what has been done to our territories. Because the OSCE Minsk Group twice sent a fact-finding mission to the occupied territories. We have been asking them to send another mission, but they did not. We’ve been asking UNESCO to come and to see the damage to our historical monuments caused by Armenian aggressors and they refused. UNESCO officials were saying that UNESCO is not involved in political issues. But after the war was over, we received the signals from UNESCO that they want to come. Of course, we expressed our surprise because they were not coming for almost 30 years, when we have been asking them. They decided to come after the war. Therefore, we, of course, agreed to that and as far as I know the last information was that their mission have been already created but now Armenia is objecting again. Therefore, it’s again delayed,"  Ilham Aliyev said.

"We are in touch with the UN High Commissioner for Refugees’ office and we are planning to resettle the former refugees as soon as possible but the main problem is landmines, and total devastation on the occupied territories. So, we will work with the United Nations and its institutions in good phase as good partners in order to achieve our main goal of restoration of liberated territories. We count on very active involvement of your office in Baku," the head of state noted.