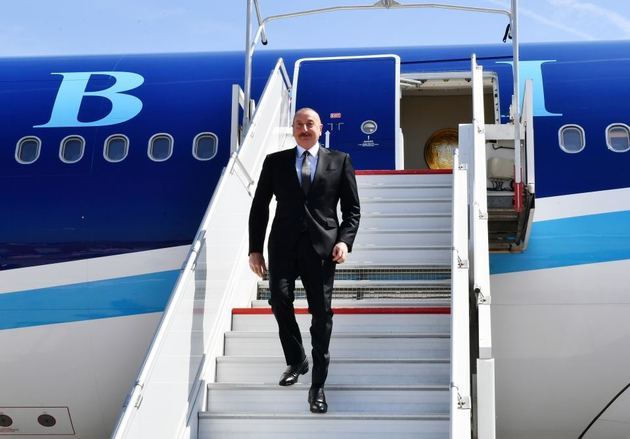 Azerbaijani President Ilham Aliyev arrived on a working visit to Brussels, the capital of the Kingdom of Belgium, at the invitation of the European Council's President Charles Michel.

Today, the meeting of the President of Azerbaijan with the Prime Minister of Armenia Nikol Pashinyan is scheduled here, which will be mediated by Chairman Charles Michel and will be devoted to negotiations on a post-war settlement.

The topic of Karabakh's fate is actively "heated up" by the nationalist Armenian opposition, which has been holding protest actions for several weeks, demanding Nikol Pashinyan's resignation and the disruption of the Armenian-Azerbaijani post-war settlement.

Formally, the "protests" are led by the former head of the National Security Service of Armenia Artur Vanetsyan and Dashnak Ishkhan Saghatelyan, but behind their backs are the leaders of Karabakh separatism and the ideologists of modern Armenian Nazism Robert Kocharyan and Serzh Sargsyan, and those, in turn, are provided with all-round support by the nationalist part of the diaspora. Azerbaijan and Armenia have been disputing the ownership of Karabakh since February 1988, and the negotiation process for the settlement of the conflict has been going on since 1991. The talks are held both in the format of bilateral meetings between the leaders of Azerbaijan and Armenia, and with the participation of mediators - the presidents of the Russian Federation, France, representatives of the OSCE Minsk Group (representatives of 12 countries, including Russia, the USA, France, Belarus, Germany, Italy, Sweden).

In the last ten years alone, the leaders of Armenia and Azerbaijan have met 21 times. At the same time, negotiations were held on the so-called neutral territory: six talks were held in Russia, three times they negotiated in Austria, Belgium and Switzerland, as well as in Germany, Great Britain, Tajikistan and France. Two more meetings - in 2020 and 2022 - were organized online.

Nine times Ilham Aliyev met with the now former President of Armenia Serzh Sargsyan, who headed the republic in 2008-2018, and after amendments to the Constitution were adopted in Armenia and the country's Prime Minister de facto got the power from the President, the republic is represented at the talks by Armenian Prime Minister Nikol Pashinyan. In total, 12 meetings between Ilham Aliyev and Nikol Pashinyan have veeen held since 2018.

Let us remind you that the mutual recognition of territorial integrity was additionally affirmed by Russia and Azerbaijan on February 22, 2022 in the Declaration on Allied Cooperation, signed by the Presidents of Russia Vladimir Putin and Azerbaijan Ilham Aliyev. With this document, Russia has balanced its policy in the South Caucasus, de jure equalizing the status of Azerbaijan and Armenia - both states are Russian strategic allies now.