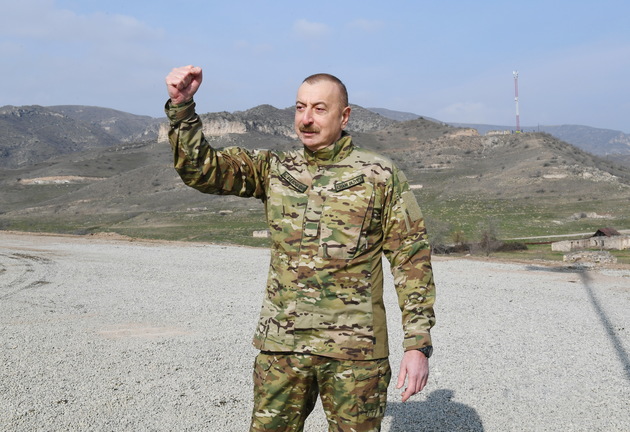 "The city of Zangilan, as indeed other cities, has been destroyed by the enemy almost completely. Only several houses remain. These housed their military unit and police station. Armenians from abroad also lived here illegally," he said in Zangilan, noting that master plans of all cities are being prepared and the first “smart village” project will be implemented in Zangilan district. - the destroyed village of Aghali will be the first village to be restored.

"Transport projects play a special role in the long-term development of the region, ensuring stability and reducing military risks to zero. All the countries participating in them will only benefit from that. Azerbaijan connects with Nakhchivan and Turkey. At the same time, a railway line from Russia to Armenia may be opened. This line can only pass through the territory of Azerbaijan. In addition, a railway communication will appear between Russia and Iran through the territory of Nakhchivan. There will be a railway connection between Iran and Armenia. A railway link will be created between Turkey and Russia. In other words, all countries of the region will only benefit from this," the president of Azerbaijan said.

"This is Khandak village of Gubadli district. There were fierce battles here as well. Our army liberated these territories by destroying and driving out the enemy. The enemy also settled here illegally. They lived in very difficult conditions. Notice that their houses are no better than kennels. This is exactly meant when I said that Armenians lived in abject poverty in the occupied territories. Hunger, misery and lawlessness were pervasive. They used such dilapidated roads," he said.

"Muradkhanli village of Gubadli district. The Armenians lived here and destroyed it. Restoration work is already underway. This is Hakari village. Look at its condition. The Armenians lived in this kennel. These destroyed houses are a product of Armenian fascism. Let the whole world see this. This is Bala Soltanli village. Most of the houses here are destroyed, but some houses were illegally occupied by the enemy. This is also a war crime. The enemy has already received its due for all these crimes and will also respond at the international level. Yusifbayli village of Gubadli district. This village was also completely destroyed by the enemy," the Azerbaijani president said.

"The overall significance of the Patriotic war lies in the fact that we have liberated our lands from occupation, expelled the enemy from our lands and also restored the territorial integrity of the country. We have demonstrated to the whole world the power of our people and state, have shown the unwavering spirit of the people. At the same time, having taken practical steps to achieve strategic goals related to the future of our country, we signed important documents. The joint statement signed on 10 November ensured the return of Lachin, Kalbajar and Aghdam districts, of course. We returned these lands without a single shot being fired. At the same time, it is this statement that secures a connection of Azerbaijan with its integral part of Nakhchivan. Also, this railway infrastructure will extend to Turkey, thus creating a second railway network connecting Azerbaijan and Turkey. Three and a half years ago, we put into operation the Baku-Tbilisi-Kars railway," the head of state stressed.

"Revanchist forces are trying to raise their heads in Armenia even today. They are trying to threaten Azerbaijan with more provocations and another war. They must understand that we are paying attention to everything, that we keep everything under control and will never allow Armenian fascism to raise its head again. We have destroyed Armenian fascism. We drove out the enemy out of our native lands, threw it out of here. It is safe to say that we have destroyed the Armenian army. There is no Armenian army. It has been defeated. There is neither equipment nor manpower left. They have acknowledged that they had 10,000 deserters during the war. There was not a single deserter in the Azerbaijani army. This testifies to the high morale of our people and our army. This is a manifestation of the current policy," he said.

"We won Victory on the battlefield. We liberated these lands from the invaders in battles. Having inflicted a defeat on Armenia, we forced it to sign an act of surrender on 10 November and return Lachin, Kalbajar and Aghdam districts to us because it never wanted to return Lachin and Kalbajar districts to us during the negotiations. This was the main reason for the lack of progress in the negotiations. Unfortunately, the position of Armenia and some of its foreign patrons consisted in returning five districts to Azerbaijan, so that Azerbaijan would be content with this and Nagorno-Karabakh would someday be given independence, while Kalbajar and Lachin districts would remain under the eternal control of Armenia. I rejected that offer," President Aliyev emphasized.

"Life has shown that by demonstrating a strong will and courage, we were able to achieve what we wanted. They didn't even think about returning Lachin district to us. Moving along the path I came here along today, liberating all the districts, villages and cities along the way, we came to these places. We liberated the southern part of Lachin district, the village of Gulabird from the occupiers. The villages of Safiyan and Turklar are located here. We also liberated them, creating a military foothold to control the Lachin corridor, which was already under our control. In essence, we conducted our strategic operations advancing from this direction. At the same time, advancing from the opposite side, from Khojavand district to Shusha, and passing through the mountains and gorges, we were able to conduct a successful operation. This southern part of Lachin district was liberated as a result of a military operation," the head of state noted.

"Our Victory is historic. We have restored historical justice. We have restored our rights, avenged our martyrs, took revenge and returned. Restoration work is under way now and will be continued. I have said that we will turn this region, Karabakh into a paradise. All instructions have already been issued. All work is being done and will be systematically done. From now on, we will live on these lands forever. Nobody can prevent us from living on these lands. Karabakh is ours! Karabakh is Azerbaijan!"  Ilham Aliyev concluded.