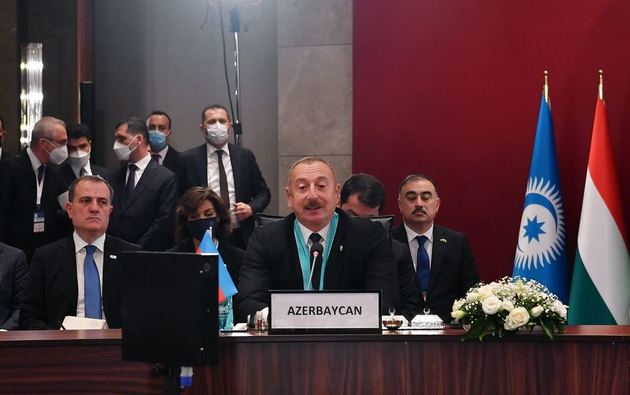 During its two-year chairmanship, Azerbaijan made great efforts to unite the Turkic world: many events were held, and now the Turkic peoples are moving into the future more united,” Azerbaijani President Ilham Aliyev said today during his speech at the VIII summit of the Cooperation Council of Turkic-speaking states.

"Today's summit is of great historical significance. First of all, because we are transforming our Council into an organization. This organization has a great future because it is based on natural allies, and history and culture, and our traditions and our customs dictate it is unity. At the same time, in today's world, threats arise every month, every year, and, unfortunately, the leading countries of the world cannot take the right steps against these threats. I am sure that the importance of the Organization of Turkic States will continue to grow not only for our countries, peoples, but also for the whole world," the Azerbaijani leader noted, Azertac reports.

Everyone in the world knows about the political, economic, military power of Turkey, and the development of Turkey, ensuring stability in the country is an important condition for the entire Turkic world.

“Our determination, will, courage in the Second Karabakh War led us to a great Victory. I must also say that everyone sees it, the support provided to us by my dear brother Recep Tayyip Erdoğan from the first hours of the war to its last minutes, gave us additional strength, became a moral support. Feeling this support, listening to his words, we felt even stronger," said the President of Azerbaijan.

"Because the honorable president said that Azerbaijan is not alone in this war. Turkey is and will always be next to Azerbaijan. This gave us additional strength. This made some forces - the patrons of Armenia - stay away from this war and allowed us to fulfill our glorious mission," the head of state emphasized.

“I hope that Armenia, which has suffered defeat because of its aggressive policy, will sooner or later understand that its territorial claims against any country will not bring them any benefit or honor. I hope that in the near future Armenia's territorial claims to Turkey and Azerbaijan will end. Otherwise, they may find themselves in an even worse situation. The Zangezur corridor is a project that can unite the Turkic world, Europe, and our neighbors, and today there is active work on the implementation of this project," the head of state emphasized.

“I would like to express my deep gratitude to Shavkat Miromonovich Mirziyoyev. On his personal initiative, a large school will be built in the Fizuli region at the expense of the budget of Uzbekistan. We were presented with the project of the school. This is another step of solidarity, friendship, brotherhood, and the Azerbaijani people appreciate this very much," the President of Azerbaijan noted.