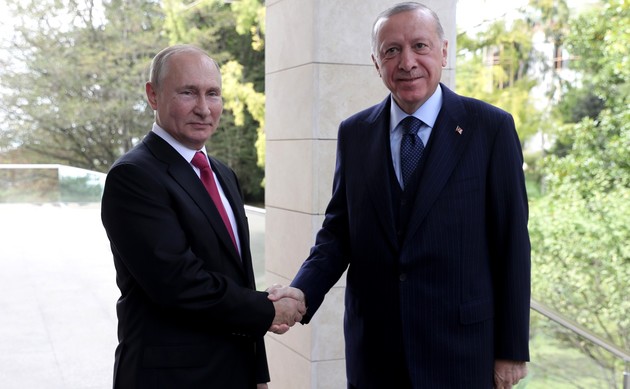 The talks between Presidents of Russia and Turkey Vladimir Putin and Recep Tayyip Erdogan, held in Sochi the day before, were of great benefit to Moscow and Ankara, Presidential spokesman Dmitry Peskov told reporters.

"These were very constructive, timely and necessary contacts, very useful for both sides," TASS cited him as saying.

Peskov said that at the talks in Sochi, Putin and Erdogan discussed creation of the Akkuyu nuclear power plant (NPP) and the possibility of building new units,

"They discussed major projects on the joint agenda. First, the schedules for continuing construction and completing the first power unit of Akkuyu. They talked about the possible construction of new units and what needs to be done in general in terms of our cooperation for the emerging sector of the peaceful atom, nuclear energy in Turkey," Peskov said.

"A new, advanced, high-tech economic sector is being created in Turkey, clean in terms of all green transitions. Russia, of course, helps Turkey with this and intends to further expand cooperation," the Kremlin spokesman explained.

Peskov said that the Russian President and his Turkish counterpart discussed the development of the bilateral military and technical cooperation, including the broadening of contacts on Russia’s S-400 anti-aircraft missile systems.

"They spoke about extending cooperation in the military and technical sphere as well as the maintenance and future cooperation regarding S-400 [air defense systems], and discussed a possibility of manufacturing certain components of the [S-400 system] on the territory of Turkey," Peskov said.

According to Peskov, Putin and Erdogan underscored the necessity to push the remaining terrorists from Syria’s Idlib province during their talks in Sochi.

"The sides underscored the necessity to fulfill [the previous agreements] in terms of pushing of terrorist elements from Syria’s Idlib, who are still present there, may pose a threat and carry out aggressive offensive actions against the Syrian army," the spokesman said.

"I do not have full details," the spokesman explained. "But this topic was indeed discussed. The sides confirmed their adherence to the previous agreements."

The Russian presidential spokesman added that Moscow has turned its attention to an agreement between Ankara and Kiev on the construction of a facility in Ukraine to service Turkish unmanned aerial vehicles (UAV) and Turkey is well aware of Russia’s stance on the danger of using such combat systems in Donbass.

"The Kremlin has certainly took a notice of it," Peskov said at a news briefing in response to deliver a statement on the construction of the training and testing center in the Kiev Region to service Turkish combat drones Bayraktar.

"Our stance is well known that the handover of such systems to Ukraine may result in use of these weapons by the Ukrainian military against their people," he said. "Turkey is well aware of our stance as well."