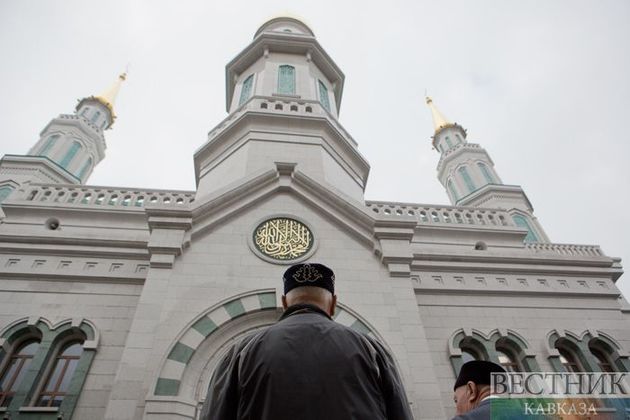 Today Muslims around the world are celebrating the Festival of the Sacrifice, Eid al-Adha, one of the most important holidays in the Muslim calendar.

On this day Muslims gather at a mosque for a common prayer and sacrifice an animal to honor the willingness of Ibrahim (Abraham) to sacrifice his only son.

The holiday is marked on the 10th day of the Zul Hijjah month and marks the end of the fifth pillar of Islam. According to a tradition, every Muslim is obligated to sacrifice a lamb or a cow, or other livestock animal. Eid al-Adha is celebrated for three days.

Russian President Vladimir Putin has congratulated the Muslims of Russia on the Eid al-Adha Islamic holiday.

"This religious holiday is important for all Muslims and is a symbol of the loyalty to the high spiritual ideals of virtue, justice, mercy and love for one’s neighbour that are the bedrock of the Holy Quran. Supporting the centuries-old Muslim traditions, Muslims make an important contribution to the preservation of our country’s cultural diversity and promote interethnic accord in society", the Kremlin press service reported.

Eid al-Adha 2020 in Azerbaijan will begin in the evening of July 30 and ends on  August 1.

"Eid al-Adha, a symbol of solidarity and brotherhood, humanism and compassion amongst people, is one of the main holidays of Islam. On this auspicious day, Muslims experience the joy of closeness to God through sacrifices in the name of the Almighty and demonstrate their readiness to display heroism for the sake of benevolent deeds," the head of state said.

"For hundreds of years, Islam has played an exceptional role in the formation of an exemplary environment of coexistence based on mutual respect, trust and the preservation of ethnic and cultural diversity in Azerbaijan, where people of different nations and religions live as a loving family. The religious holidays held in our country every year become a celebration of progressive national and spiritual values, social assistance and display of kindness. Although this year's Eid al-Adha occurs at a difficult time facing the world, our devout citizens are fulfilling their moral duties in the way of God and religion and strengthening the spirit of unity and equality in our society by their noble deeds," Azerbaijani president said.

"Dear sisters and brothers! During these holidays, I remember with gratitude the immortal memory of our martyrs who died for the independence and territorial integrity of Azerbaijan, and wish patience to their relatives and all our people. I do hope that your prayers and wishes for the prosperity and well-being of our people, the prosperity and progress of our Motherland will be materialized," the head of state said.

"I once again convey my sincere holiday congratulations to each of you, wish your families good health, happiness and abundance to your homes. Happy Eid al-Adha!" Azerbaijani president said.

The festival of the sacrifice is related to the pilgrimage to Mecca. It honors the willingness of Ibrahim to sacrifice his son Ismail, as an act of submission to God's command. This act showed his true piety, and Allah sent Ibrahim two black bulls to sacrifice instead of his son. So during Eid al-Adha Muslims sacrifice an animal and gift meat to the poor.