Pashinyan's revelations on BBC: Russia is not Armenia's ally, Karabakh's population was only 18% Armenian 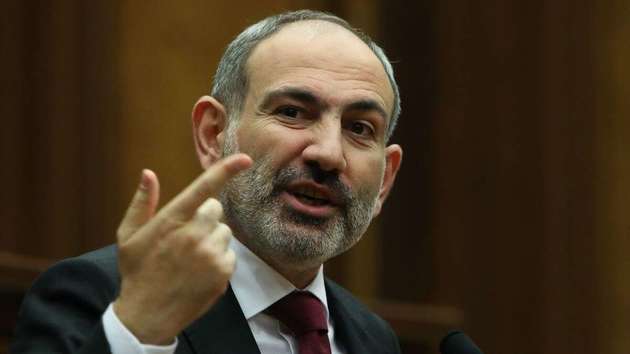 Armenian Prime Minister Nikol Pashinyan spoke to BBC Hardtalk's Stephen Sackur. During the 20-minute interview, the Armenian PM made several statements that could provoke political scandals both within the republic and in Russia.

In particular, Nikol Pashinyan verbally lowered the level of Russian-Armenian relations, from allies to partner countries, when Sackur asked him about Armenia's strategia choice - whether it wants to adhere to relations with Russia or look much more toward the EU and NATO.

In response, Pashinyan apparently wanted to play along with the Western audience of the BBC: "Russia is a strategic partner of Armenia in terms of security." It is unlikely that this was just due to insufficient knowledge of the English language, especially since Sackur used the word alliance in his question about the relations between Armenia and Russia.

The Armenian prime minister clearly deliberately called Russia only a partner, not an ally, and only in terms of security, after which he began talking about relations with the West in complimentary tones.

"We are a member of the Eurasian Economic Union, and we have a Comprehensive and Enhanced Partnership Agreement with the EU. And by the way now the European Union is our main partner in our reform agenda implementation. We have quite effective cooperation with NATO and by the way we are participating in peacekeeping missions in Afghanistan, in Lebanon, in Kosovo, in Mali. We have quite effective cooperation with the United States too," Pshinyan listed more important, in his opinion, aspects of Armenia's international policy than ties with the Russian Federation.

After that, the presenter drew attention to critical failures in the logic of modern Yerevan: Armenia cannot be close to NATO, being in a conflict with Turkey, and cannot move closer to the United States without stopping trade relations with Iran, but most importantly, it has choices to make between staying loyal to Moscow and embracing a "different direction". In response, Nikol Pashinyan once again said that he considers relations with Russia to be only at the level of strategic partnership.

Thus, the head of the Republic of Armenia de facto announced the withdrawal of Yerevan from allied relations with Russia.

In addition, speaking about the Nagorno-Karabakh conflict, Nikol Pashinyan voiced statistics that refute all the previous rhetoric of the occupants of Azerbaijani territories. "Look at reality. Reality is in the moment of this conflict, 19% ... 18% of the population of Nagorno-Karabakh were Armenians," he said, although the standard position of supporters of the Karabakh occupation is based on the fact that in the last Soviet years the Karabakh's population was up to 80% Armenian.

It remains unclear what is behind this scandalous statement, which directly contradicts the official Soviet statistics, among other things.

For the rest, Nikol Pashinyan tried to avoid the presenter's acute questions. He never responded to a request to directly recognize or not recognize the war crimes of his political predecessors during the Nagorno-Karabakh war, called the construction of a road in the occupied Lachin region of Azerbaijan (condemned by the European Union) "not an Armenian initiative", did not recognize the failure of domestic policy to fight with the coronavirus pandemic. In general, in an interview with Stephen Sackur, the Prime Minister of Armenia found himself in the position of an acquitted accused, and of course, it's not only due to the Hardtalk programme's style, but also because his own mistakes as a statesman exceeded a certain critical mass that ousted any positive agenda from conversations with independent journalists.