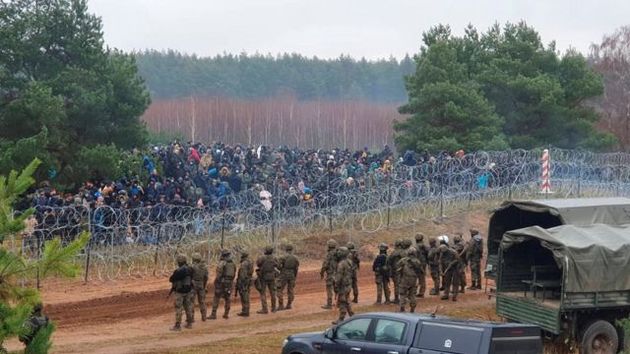 The Polish border guards used a water cannon and unleashed tear gas on the border with Belarus in response to actions by migrants who started to pelt them with sticks and stones.

A group of about 100 migrants on the border with Poland began to hurl stones and sticks at Polish border guards. In response, they detonated several stun grenades and used a water cannon, pushing the migrants away from the fence. Belarusian border guards are not interfering in migrants’ clashes with the Polish forces, TASS reports.

Over 2,000 migrants mostly from Iraq have been stranded on the Belarusian-Polish border for the ninth day. They are seeking to get to Germany by penetrating into Poland. On November 15, the migrants left the impromptu camp near the Belarusian Bruzgi border checkpoint and are now situated right in front of the Polish fences at the border. The Polish forces have beefed up their presence at the border checkpoint near the settlement of Kuznica.