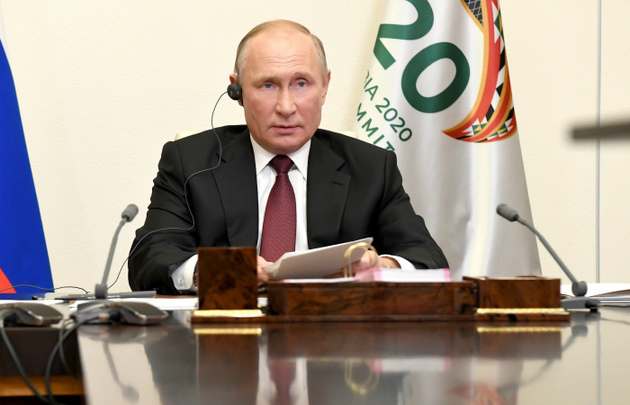 The long-term and large-scale unemployment and poverty are the main risks globally, Russian President Vladimir Putin said speaking today at the G20 summit.

The official web-site of the Russian President provides the read-out of Vladimir Putin’s address at the summit:

"The scope of problems humanity has faced in 2020 are truly unprecedented. The coronavirus pandemic, global lockdown and frozen economic activity have launched a systemic economic crisis the world probably has not known since the Great Depression.

The growth of national economies has been severely undermined. The pandemic claimed dozens, hundreds of thousands of lives while millions of people have lost their jobs and incomes.

The main risk, obviously, even despite some positive signals, the main risk remains: mass long-term unemployment, a so-called “stagnant” unemployment with the subsequent growth of poverty and social insecurity. The role of the G20 is to stop this from happening.

Russia highly values Saudi Arabia’s efforts during its G20 Presidency. In the present situation, the forums’ agenda was re-focussed towards global economic recovery and the protection of people’s health and wellbeing.

Drawing on the experience of fighting the 2008–2009 global financial crisis, the G20 launched a number of multilateral initiatives to curb pandemic-related economic risks and to restore business activity including via key global management institutions, namely the United Nations Organisation, the World Health Organisation, IMF, the World Bank and others.

We all together facilitated the emergency mobilisation of $21 billion for essential medical needs and gave a start to international cooperation in developing, producing and distributing vaccines.

Like other nations, Russia took unparalleled anti-crisis steps as it gave top priority to the key and fundamental value – people’s lives and health.

To ensure the sustainability of the national economy and maintain social stability, Russia’s Government together with the Bank of Russia are implementing a comprehensive plan of assistance to the population, small and medium-sized businesses and industries in the risk zone. Support was provided to the banking sector and regional budgets, businesses were issued loans while government investments were increased. The current volume of anti-crisis budget support totalled 4.5 percent of the GDP.

The timely adoption of these targeted measures allowed Russia, as well as the majority of developed countries, to mitigate the economic decline, to enhance the healthcare system and get through the hard times without irreparable losses. Both our accumulated reserves and attracting loan resources in the domestic market helped to finance the above measures.

Yet we are aware that the developing economies and some emerging market economies objectively lack such resources. Their fiscal revenues have plunged while the need to allocate considerable funds for fighting the pandemic is growing practically daily. National currency devaluation carries a big risk, and respectively, the cost of servicing on the state debt, primarily for low income countries, which have two thirds of their loans in US dollars.

The IMF and the World Bank rendered significant assistance to developing countries. Following their proposal, G20 made a decision in April to install a temporary moratorium on developing nations’ debt payments. That is certainly a much-needed initiative, but it only covers the poorest countries. It does not include their debt to private creditors and concerns less than four percent of the developing countries’ overall costs of servicing state debt in the current year.

I believe additional measures are needed to prevent the deterioration of the situation and the growth of economic and social inequality.

Urgent issues that have accumulated in international trade also need to be addressed. Thus, it is necessary to try to contain protectionism, to abandon the practice of unilateral sanctions and to resume delivery chains. We spoke about this just yesterday at another international platform, APEC.

Adjustment of multilateral universal trade rules to e-commerce (much needs to be done in this area) and other new economic realities are also on the agenda.

Russia supports the draft key decision of the current summit aimed at making effective and safe vaccines accessible for everyone. Undoubtedly, immunisation drugs are and must be universal public domain. Our country, Russia, is ready to provide the countries in need with the vaccines developed by our researchers. This is the world’s first registered vaccine Sputnik V, based on human adenoviral vectors platform. The second Russian vaccine, EpiVacCorona from a Novosibirsk research centre, is also ready. The third Russian vaccine is coming.

The scale of the pandemic compels us to engage all the resources and research available. Our common goal is to form portfolios of vaccines and ensure reliable protection for the planet’s population. It means that there will be enough work for everyone, colleagues, and I think it is a case when competition may be inevitable but we must proceed primarily from humanitarian considerations and make it a priority.

Let me stress – this crisis must become an opportunity to alter the trajectory of global development, preserve the favourable environment and climate, ensure equal conditions for all nations and peoples, build up effective tools of multilateral cooperation and key international institutions while drawing upon the UN Charter and universally accepted norms and principles of international law. We see this approach to solving global issues as the key task and responsibility of the G20 as the main forum of the world’s leading economies.

Colleagues, I would like to once again thank the hosts of today’s event, Saudi Arabia. Thank you for your attention."

Kremlin: No decision made yet on whether Putin to attend G20 summit

Kremlin: Putin’s participation in G20 summit to depend on situation

Russia's budget to be in surplus current year, Putins says

G20 summit kicks off in Rome