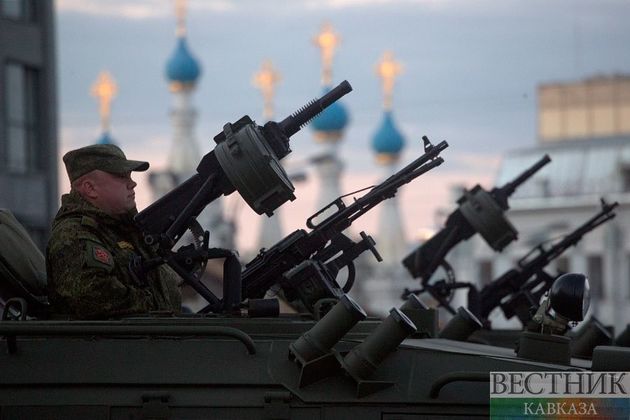 The military parade devoted to the 75th anniversary of the Soviet Union’s victory over Nazi Germany in the 1941-1945 Great Patriotic War started on Moscow’s Red Square.

"Attention, this is Moscow speaking and showing. Listen to and watch Red Square. The Victory Parade in honor of the 75th anniversary of the Victory in the 1941-1945 Great Patriotic War!" the speaker announced. These words traditionally begin military parades in Russia in honor of the victory over Nazi Germany.

The banner-carrying group of the guard of honor battalion of the Preobrazhensky Regiment brought the Russian flag and the legendary Victory Banner, which had been hoisted over the Reichstag by the combatants of the 150th Idritsa division in 1945, to Moscow’s Red Square.

Russia is open for dialogue and cooperation in creating a reliable global security system, which the swiftly changing contemporary world needs, Putin said during the Victory Parade in Moscow.

"We understand how important it is to strengthen friendship, trust between peoples and we are open for dialogue and cooperation on the most essential issues of the international agenda. They include the issues of creating a reliable common security system, which the swiftly changing contemporary world needs," the head of state stressed.

The countries can protect the world "against new dangerous threats" only if they act together, the Russian leader said.

"Its soldiers [the soldiers of the Red Army] needed neither the war nor other countries, nor glory, nor honors. They strove to crush the enemy, achieve the victory and return home. And they paid an irretrievable price for the freedom of Europe," Putin stressed.

Parades to mark the 75th anniversary of Victory are held on June 24 in 28 cities across Russia, including hero cities. Many other cities observe the date with other kinds of festivities, including ceremonial processions.

Russia postponed its military parade traditionally held on Moscow’s Red Square on May 9 for a later date due to the coronavirus pandemic.

At a video conference with Defense Minister Sergei Shoigu on May 26, Russian President Vladimir Putin announced that the anticipated Victory Parade would be held on Moscow’s Red Square on June 24.

The head of state explained he had chosen this date because June 24 was the day when in 1945 the legendary historic parade of victors took place, when soldiers, who fought for Moscow and defended Leningrad, who stood their ground for Stalingrad, liberated Europe and stormed Berlin, marched on Red Square.

The Russian president instructed the defense chief to make sure that there weren’t any risks to the health of the military parade’s participants.