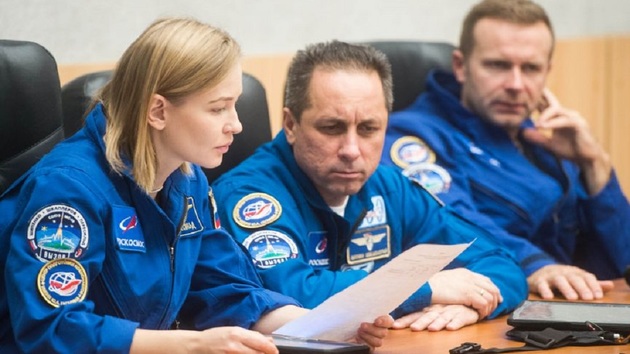 The launch vehicle Soyuz-2.1a carrying the Soyuz MS-19 manned spacecraft will be launched from the Baikonur Cosmodrome on Tuesday.

Roscosmos cosmonaut Anton Shkaplerov, as well as actress Yulia Peresild and director Klim Shipenko, who will shoot the first ever feature film in space, will go to the International Space Station (ISS).

"In accordance with the flight program of the International Space Station, on October 5, 2021, at 11:55 Moscow time, the launch of the Soyuz MS-19 manned transport spacecraft is planned from the Baikonur cosmodrome," TASS cited Roscosmos as saying.

The flight to the ISS will take approximately 3 hours and 17 minutes, docking with the Rassvet module is scheduled for 15:12 Moscow time on the same day.

Peresild and Shipenko may become the first film crew to visit space. They fly to the ISS to film a space drama about a female doctor who flies into orbit to rescue a cosmonaut. The crew will have to film about 35-40 minutes of screen time. Peresild and Shipenko will spend 12 days in orbit and return to Earth on the Soyuz MS-18 spacecraft together with cosmonaut Oleg Novitsky, who has been on the ISS since April.