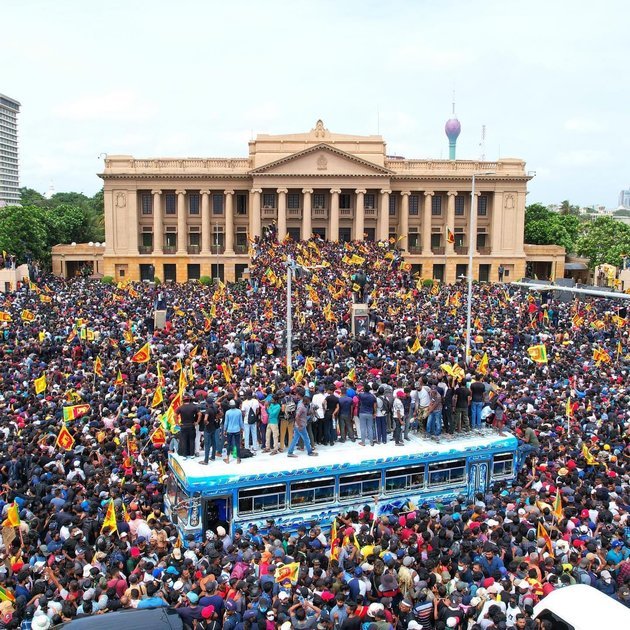 Mass protests are ongoing in Sri Lanka since the early morning of July 9. The president is rumoured to be on the run. The government holds an emergency meeting without the head of state.

According to NewsFirst, two ships of the Sri Lankan Navy with unknown persons on board left the port of Colombo. President Gotabaya Rajapaksa may be in one of them.

Prior to this, thousands of people took to the streets of the capital of Colombo, demanding the resignation of Rajapaksa. The demonstrators broke through the police cordon and entered the president's residence, but he was not found there. About 32 people were injured.

The Prime Minister of the country, Ranil Wickramasinghe, called an emergency meeting of the heads of all parties in the country to restore stability.

"In order to discuss the situation and find a quick solution, Prime Minister Ranil Wickremesinghe called an urgent meeting of party leaders. He also asks the speaker to convene a meeting of the House of Representatives," the Prime Minister said in a statement.

The reasons for political instability are related to the economy. After the coronavirus pandemic started, the influx of tourists to the island country in the Indian Ocean has fallen sharply. The national debt has grown. External debt reached $51 bln.

The country's authorities tried to stop the crisis by saving on electricity and introducing austerity measures. However, the population, dissatisfied with the decline in living standards and inflation, is not ready to continue to endure the economy and the deterioration of their living conditions.

Sri Lanka’s old political order has collapsed. What happens next?