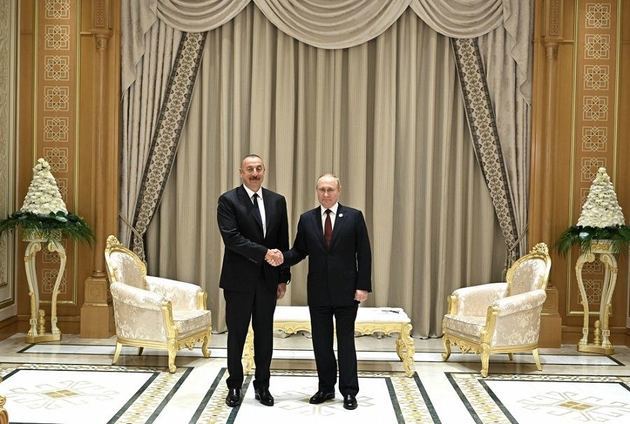 Russian President Vladimir Putin met with the President of Azerbaijan Ilham Aliyev during his visit to Turkmenistan.

The meeting took place on the sidelines of the sixth Caspian summit, which took place in Ashgabat Wednesday.

Putin thanked his Azerbaijani counterpart for his ideas of how to boost cooperation in the Caspian Sea region at their meeting.

"I would like to say a special thank you for the ideas you came up with during our informal talks and our informal lunch," Putin said. "It was business-like in every sense of the word, and the colleagues put forward plenty of interesting proposals for the development of regional cooperation."

"So whatever the case, our meeting was already beneficial, and bilateral relations will get an extra boost from our bilateral conversation now," the Russian president added.

Putin pointed out that relations between the two countries "are in a very good state."

"Everything we have agreed on is being implemented. Trade is growing," Putin said recalling that in 2021 trade increased by over 16% and in the first three months of 2022 by about 5.5%.

"In other words, a steady growth is ongoing," the Russian leader said.

Putin pointed out that "of course, there are issues of regional security, including and above all those related to the Karabakh settlement." "You and I have talked about it, and now we have a chance to talk more about it," Putin concluded.

The leaders of Russia and Azerbaijan have regular contacts both in bilateral and multilateral formats. Last time, the two heads of state communicated in late May: they had a phone call and discussed, in particular, the situation around Nagorno-Karabakh, as well as issues of cooperation between Moscow and Baku.

The two presidents last met in person in on February 22 in the Kremlin. Back then, Putin and Aliyev also discussed bilateral topics, Nagorno-Karabakh and the situation in Ukraine. After the negotiations, they signed a declaration on allied cooperation and answered reporters’ questions.