WWII Immortal Regiment marches to be held in 88 countries 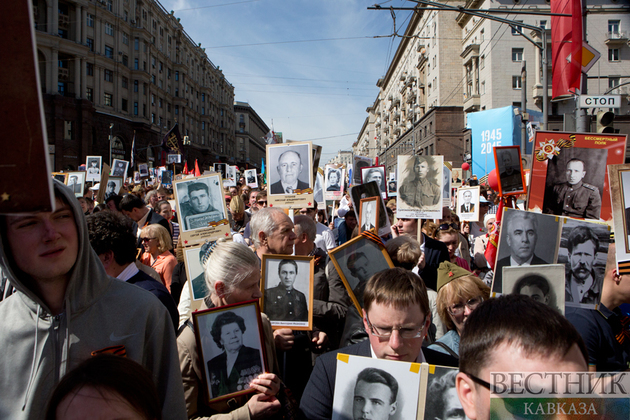 The renowned Immortal Regiment marches to commemorate those who fought and died during WWII will take place in 88 countries during the forthcoming Victory Day celebrations and this commemorative event will for the first time be held in Venezuela, Russian Foreign Ministry Deputy Spokesman Alexey Zaitsev said on Friday.

"The Immortal Regiment continues to consolidate the diaspora and remains a symbol of the memory of those who laid down their lives in the struggle against Nazism. According to our information, this event is being arranged in its in-person format in 88 countries," the Russian diplomat stated.

"This year, for the first time, the Immortal Regiment march will take place in Venezuela and marches are expected in Argentina, Belarus, Bulgaria, Jordan, Spain, Kyrgyzstan, Nicaragua, Serbia and other countries," the deputy spokesman said.

The event’s organizers will pay special attention to security in view of possible provocations, Zaitsev assured.

Overall, the commemorative events devoted to the 77th anniversary of the victory over Nazism are set to embrace representatives of almost 130 countries and will be organized by Russian compatriots, he said.

"Also, such projects are being planned as the St. George Ribbon, a Candle of Memory, Windows of the Victory, flower-laying ceremonies at memorials to Soviet soldiers, motor rallies, lessons of courage, photo exhibitions and film shows," the Russian diplomat revealed.