What we need to know about 1918 massacres of Azerbaijanis 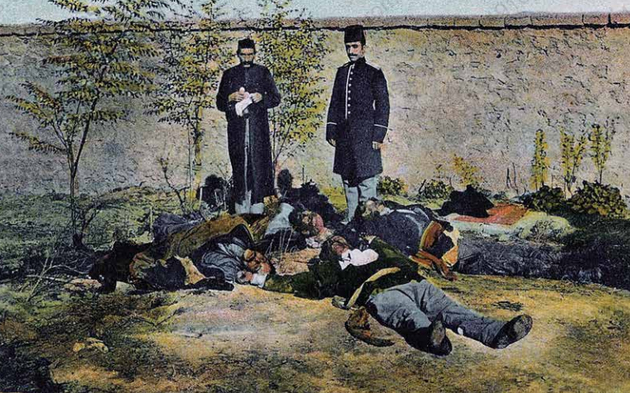 March 31 marks the Day of the Genocide of Azerbaijanis - on March 31, 1918, militants of the Dashnaktsutyun nationalist party and the Bolsheviks began mass murders of Azerbaijanis in Baku and other Azerbaijani cities . What do we need to know about these events?

The Baku Council - a coalition of Bolsheviks and Dashnaks - wanted to assert their power in Baku and Azerbaijan. Azerbaijan at that time accounted for over 90% of the former Russian Empire's oil production, and the Bolshevik authorities gave the order to keep Baku at any cost. The Dashnaks, in turn, supported the Bolsheviks' plans because of their national and confessional hatred towards Muslim Azerbaijanis.

They decided to remove the Azerbaijani party "Musavat" for power, around which the patriotic forces were concentrated back then, working to create an independent state - the Azerbaijan Democratic Republic. After the Brest-Litovsk Treaty was signed on March 3, Turkish troops headed for the Caucasus, and the Baku Council feared that Turkey might help Musavat and drive the Bolsheviks and Dashnaks out of Baku. Another threat was the possibility of forming a united state of Azerbaijan, Armenia and Georgia in the South Caucasus.

The massacres of Azerbaijanis were triggered by the Baku Council's intention to disarm a small detachment of officers who returned home from the disbanded Wild Division, who were supposed to form the army of an independent Azerbaijani state. There were several dozen servicemen, but the operation instantly turned into a massacre of the Azerbaijani civilian population by Armenian military units. The Bolsheviks deliberately agreed to cooperate with the Dashnaks, as they hoped that such an outbreak of nationalist aggression would prevent the South Caucasian peoples from uniting and defending their independence together.

The Dashnaks also destroyed many Azerbaijani villages in the South Caucasus: 211 in the Erivan province, 150 in the mountains of Karabakh, 122 around Guba, 115 in Zangezur, 92 in the Kara region, 58 around Shamakhi.

The Dashnak battalions that carried out the massacres of Azerbaijanis and had combat experience of the First World War were opposed by only a small group of military men of the Wild Division and the Musavat party volunteers, who had no experience (Azerbaijanis were not subject to conscription during the tsarist period), while the Baku Council was supported by the Caspian navy, which launched a massive shelling of the Muslim quarters of Baku. Musavat entered into negotiations to end the massacre in exchange for giving up the struggle for power in Azerbaijan. After that, the Bolsheviks and Dashnaks gained complete control over Baku.

The massacres of Azerbaijanis gave the Bolsheviks and Dashnaks only a temporary preponderance in the struggle for the region. On April 22, the Transcaucasian Democratic Federative Republic was formed. But the Georgian Democratic Republic proclaimed itself independent on May 26, and the Azerbaijan Democratic Republic  - on May 28. In the summer, the Baku Council tried to seize Tiflis, but made a mistake, as the Dashnaks staged massive pogroms of Muslim villages. In early July, the Red Army was stopped by local forces and the Caucasian Islamic Army led by Turkish General Nuri Pasha.

As soon as the Bolsheviks began to lose control over the situation, the Dashnaks betrayed them and entered into a coalition with the Central Caspian Dictatorship, which relied on the British military support. On September 15, 1918, Baku was liberated and the Government of the Azerbaijan Democratic Republic moved there.

"In 1918-1921, all foreign observers agreed that the South Caucasus had only one chance to maintain independence from the Bolsheviks - the creation of a single South Caucasian state. This was well understood in Tiflis and in Baku, but, unfortunately, they did not understand and did not want to understand in Yerevan. Dashnak territorial claims against Azerbaijan and Georgia poisoned the atmosphere throughout the entire period of independence of the Caucasian states. It was the refusal of Yerevan from a constructive approach, first of all, to its own state building that was one of the greatest tragedies of that time in the South Caucasus," famous researcher of the history of the Caucasus Georgy Mamulia told Vestnik Kavkaza.