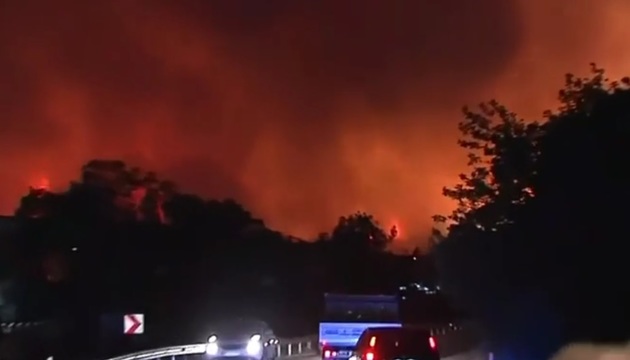 A coal-fueled power plant in southwest Turkey and nearby residential areas were being evacuated Wednesday evening as flames from a wildfire reached the plant, a mayor and local reporters said as sirens from the plant could be heard blaring.

Milas Mayor Muhammet Tokat, from Turkey’s main opposition party, has been warning of the fire risks for the past two days for the Kemerkoy power plant in Mugla province. He said late Wednesday that the plant was being evacuated. Local reporters said the wildfires had also prompted the evacuation of the nearby seaside area of Oren.

Turkey’s defense ministry said it was evacuating people by sea as the fires neared the plant. The state broadcaster TRT said the flames had “jumped” to the plant. Strong winds were making the fires unpredictable.

Authorities have said safety precautions had been taken at the Kemerkoy power plant and its hydrogen tanks were emptied. TRT said flammable and explosive substances had been removed. The privately run plant uses lignite to generate electricity, according to its website.

As the mayor announced the evacuation on Twitter, Turkey’s President Recep Tayyip Erdogan was speaking live on A Hbr and said the power plant was at risk of burning. Three ministers were there to oversee developments, he said, and added planes and helicopters had been there all day to fight the fires.

But the mayor said air support came infrequently and only focused on the closer flames around the plant rather than addressing the wider fires in the area that were being fanned by shifting winds. At night, air support was not possible at all and videos showed flames in the plant’s vicinity.

Firefighters have been trying to protect the power plant for the past two days. Along with police water cannons, they fought back the flames Tuesday night while other rescuers dug ditches around the Kemerkoy plant. Videos from an adjacent neighborhood in Milas showed charred, decimated trees.