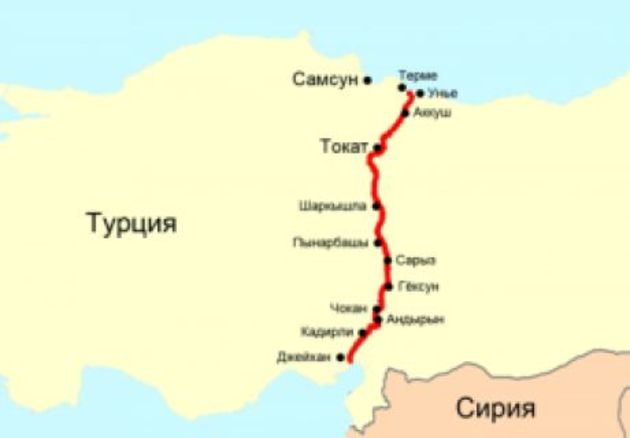 Çalık Holding (Turkey) will find a new partner to replace Eni (Italy) for construction of the Samsun-Ceyhan pipeline, a project to connect the coast of the Black and Mediterranean Seas. Turkish Minister for Energy and Natural Resources Taner Yildiz said that the project will be frozen, unless such partner is found, Trend reports.

The minister expressed confidence that Russian energy companies would not cooperate with Cyprus in the eastern part of the Mediterranean Sea. Turkey will put companies cooperation with Cyprus in that area on the blacklist, the way it was done with Eni.

The pipeline will run from the Turkish coast of the Black Sea in the Samsun District of Ceyhan on the coast of the Mediterranean Sea. The project will transport crude oil from Russia and Kazakhstan, bypassing the Borphorus and Dardanelles.

Nicosia started explorations on the shelf in September 2011. Turkish Prime Minister Recep Tayyip Erdogan spoke out against such activities and added that Turkey will cooperate with the North Cyprus in the exclusive economic zone. Turkish forces have been stationed in the area since 1974.

Novak reminded that proposals on realization of the project had been sent in 2011. Russia proposed a tariff of $55 per ton, Turkey proposed $77. The Turkish tariff makes the project too expensive, compared with other ones.

Eni, Calik, Rosneft and Transneft (Russia) signed a memorandum of understanding in October 2009 to form a joint venture for the pipeline project. Turkey has lifted the expenses from $2 billion to $4 billion for the project.