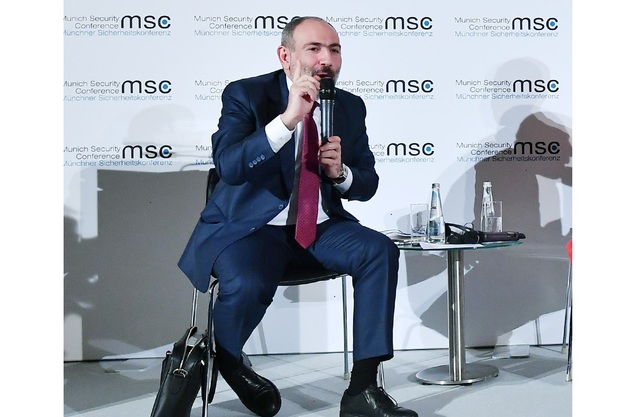 The Munich Security Conference was attended by more than 800 delegates, including 150 heads of state, prime ministers and  government members. Those who followed the situation in the Caucasus were particularly focused on the Armenian Prime Minister's visit to the conference, expecting him to provide specific comments on the Karabakh settlement.

However, Nikol Pashinyan's visit to Germany once again demonstrated his unwillingness to abandon his occupational rhetoric, which it all about desire to affirm the unrecognized status of Nagorno-Karabakh. This became clear even before his meeting with President of Azerbaijan Ilham Aliyev, during a briefing with foreign journalists at the Friedrich Ebert Foundation, where the Armenian PM made a number of confessions about the unresolved Nagorno-Karabakh conflict and the glorification of Nazi accomplice Garegin Nzhdeh in Armenia.

Journalists asking Pashinyan questions noted that the PM was not linked to Armenian separatism during escalation of nationalist and ethnic problems in 1988-1992. They also emphasized Pashinyan’s noninvolvement in the events of the Karabakh war, in which two previous Presidents of Armenia Robert Kocharian and Serzh Sargsyan, who entered the republic’s modern history precisely because of their 'military merits', took an active part.

They expected Pashinyan to introduce a new political doctrine into the peace process. But, answering journalists' questions, the Armenian PM chose to look for gaps in Azerbaijan's rhetoric, representing Baku as an unpredictable side, which, according to Pashinyan, does nothing to provide security for the Armenian population of Karabakh. Pashinyan believes Azerbaijan "will certainly carry out ethnic cleansing of the region if Armenia voluntarily abandons its occupation policy."

The answer to the question of the glorification of Garegin Nzhdeh destroyed any prospect of reaching phased agreements - the Armenian PM preferred to note Nzhdeh's activities during World War I, deliberately belittling the fact of his cooperation with the Nazis. Pashinyan attributed cooperation with the Nazis to eminent Azerbaijani emigrant Mammad Amin Rasulzade. On the whole, the Armenian Prime Minister's rhetoric regarding the crimes of Garegin Nzhdeh suggested that aiding Nazis is not something criminal for present-day Armenia.

Despite the fact that the Karabakh clan was removed and now opposes Pashinyan, its shadow still hangs over the peace process. The methodology guidelines that have guided Armenian diplomacy in recent decades are still relevant, with the only difference being that the current political elite is not quite confident in using them, often being confused and contradicting itself.

Azerbaijan and Armenia: 10 months after the war

Baku is showing strategic patience. But how long will it have to wait?