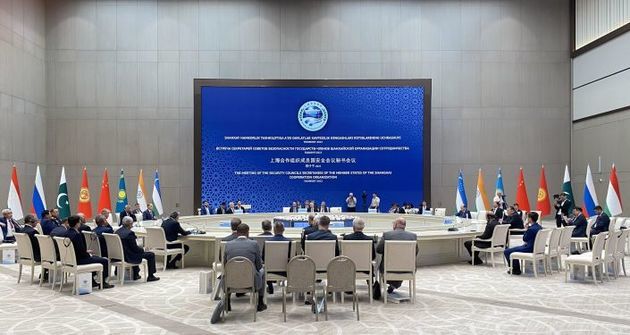 Established in 2001 as a successor to the Shanghai Five, the Shanghai Cooperation Organization is the largest regional grouping in Eurasia, covering around 40 percent of the world’s population and 30 percent of global economic output. Owing to its impressive profile of security and economic cooperation, the SCO has gained enormous traction across Asia. No surprise that a number of countries from the Middle East and Southeast Asia are lining up to join as dialogue partners, observers and members, Arab News writes.

In the annual summit of the SCO’s heads of state in Samarkand, Uzbekistan, on Sept. 15-16, Iran will gain full membership of the organization, while Saudi Arabia, Qatar and Egypt will become dialogue partners.

Moreover, Belarus will begin the process of acquiring membership; Armenia, Azerbaijan, Cambodia and Nepal will become observers; and Bahrain and the Maldives will start the process of joining as dialogue partners. The UAE reportedly wants to join the SCO as a member, bypassing other accession conditions. Syria, Iraq, Israel, Bangladesh and Vietnam also hope to join as dialogue partners or observers.

Since its inception, the SCO has forged close ties with several international institutions and regional organizations, including the UN Economic and Social Commission for Asia and the Pacific, the Asian Development Bank, the Association of Southeast Asian Nations, and the Collective Security Treaty Organization. A memorandum of understanding between the SCO Secretariat and the General Secretariat of the League of Arab States was also concluded during last year’s SCO summit in Dushanbe, Tajikistan.

The SCO was initially branded by the US as a hostile bloc, led by China and Russia to challenge its post-cold war global supremacy. Quite the contrary, its evolution conforms to the familiar pattern of “new regionalism” in the developing world, which has produced viable regional organizations, such as the Gulf Cooperation Council and ASEAN. All are intergovernmental organizations with similar structures, defying the supranational mode of integration in the EU.

The SCO also shares significant similarities with the GCC and ASEAN in terms of its origin and evolution. It was created to combat the three evils of terrorism, extremism and separatism. The GCC and ASEAN also came into being to address the security threat from Iran and communism, respectively. While regional security remains a common concern for both organizations, their real success lies in economic integration: GCC’s common market versus ASEAN’s economic community.

However, the SCO’s comparative distinction arises from its rapid progress in forging close security and economic collaboration. The Regional Anti-Terrorist Structure is its key institution to counter the three evils. Security cooperation is reinforced by military exercises, dubbed as peace missions, and counterterrorism drills held periodically in the member states. It has produced tangible outcomes in combating terrorism, in particular.

The SCO’s economic value arises from the fact that it is led by China, the global economic powerhouse, and includes Russia and India as major international players, as well as the states of Central Asia, which have largely untapped resources of oil and natural gas. Although the SCO has yet to establish a free trade zone, it has made significant gains in expanding intraregional trade and investment, and regional share in global trade.

China and Russia do have competitive interests in the SCO, but their overarching goal is to create the Greater Eurasian Partnership by synergizing SCO’s developmental activities with multilateral integration projects in Eurasia, including China’s Silk Road Economic Belt and Russia’s Eurasian Economic Union.

This strategic mission of the SCO makes it the best option for the GCC as it seeks to diversify geo-economic linkages in Asia without jeopardizing geopolitical partnership with the US. These two paths are not at cross-purposes, as one ensures economic prosperity and the other provides security guarantee. There are other reasons, too.

So far, the Gulf nations have sought bilateral free trade agreements with China, India and Pakistan, but with limited success. Their relations with the states of Central Asia and the Caucasus, despite the commonality of hydrocarbon riches, are still minimal. With ASEAN as well, successive rounds of ministerial meetings have failed to deepen trade and economic relations.

That Saudi Arabia and Qatar are set to become dialogue partners of the SCO is, therefore, an encouraging development. Bahrain will enter the club in over a year. It would be great if the UAE also joined the accession process. Together with Egypt, Turkey and other Middle Eastern aspirants of SCO partnership, the oil-rich Gulf nations have the wherewithal to act as a catalyst in Eurasian regionalism, along with China, Russia and resourceful Central Asian and Caucuses members.

That is why they do not need to worry about Iran, as it gets ready to join such a large regional organization as a full member for the first time since 1979. After all, arch-rivals India and Pakistan have been members of the SCO since 2017, without causing any trouble in its institutional efficacy. The GCC members are, no doubt, late entrants in this pivotal regional body. But better late than never.

In fact, as China’s largest trading partner and recipient of the bulk of Chinese investments under the Belt and Road Initiative, Saudi Arabia can use its formidable economic clout to shape SCO’s progressive agenda in its own way. In this regard, Crown Prince Mohammed bin Salman, who has been invited to participate in the Samarkand summit, can play a pivotal part by sharing the Kingdom’s exceptional expertise in renewable energy with the SCO.