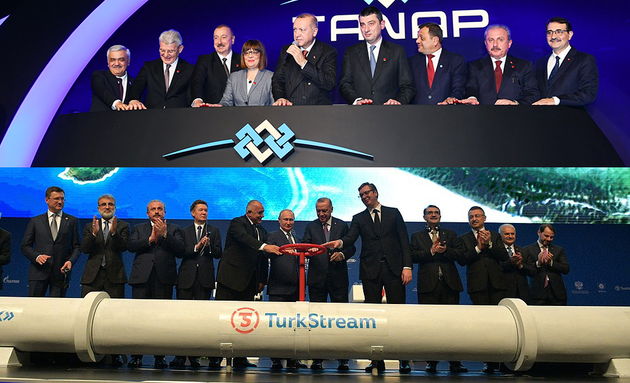 Earlier this week, in Istanbul, Russian and Turkish presidents Vladimir Putin and Recep Tayyip Erdogan launched the Turkish Stream gas pipeline, which consists of two pipelines with a capacity of 15.75 billion cubic meters of gas per year each. The first line will deliver Russian gas to Turkish consumers, the second - to the countries of Southern and Southeast Europe.

In anticipation of this event, Azerbaijani President Ilham Aliyev said: “We know how important the Turkish Stream project is for Russia and Turkey. Both countries are our close partners, so we supported this project from the very beginning. As for the delivery of Azerbaijani gas to the European market after the implementation of the Southern Gas Corridor project, 10 billion cubic meters of gas per year will be supplied to Europe. This is a very small amount compared to the volume that Russia supplies - 150-170 billion cubic meters of gas per year. That is why the Southern Gas Corridor project, of course, is not a competitor at all. "

A few days later, Russian Ambassador to Azerbaijan Mikhail Bocharnikov in an interview with the Azerbaijani SVS channel did not ruled out that at some stage, Russian gas could be delivered via the Trans-Anatolian gas Pipeline (TANAP) project. ”Both Russia and Azerbaijan are oil and gas countries producing hydrocarbons. We already cooperate - Russia participates in the development of oil and gas condensate fields in Azerbaijan. Who knows, maybe, at some stage, our gas will be distributed through TANAP, I would not rule this out,” the diplomat said.

On November 30, TANAP reached the borders of the European Union, and, in October, Azerbaijan will begin to supply gas to Europe. TANAP along with the development of the Shah Deniz-2  gas field, expansion of the South Caucasus pipeline Baku-Georgia-Turkish border, construction of the Trans-Adriatic Gas Pipeline (TAP) connecting Greece, Albania and the Adriatic Sea in southern Italy became a part of the Southern Gas Corridor ( SGC) project, which provides for the creation of a pipeline infrastructure for the transportation of Azerbaijani gas through Turkey to Europe. SGC will provide the necessary transport capacity to deliver 16 billion cubic meters of gas per year from the Caspian region directly to Europe.

The South Gas Corridor, first proposed in the 1990s as an alternative source of energy from the Caspian region and the Middle East, is finally becoming a reality, Natural Gas World writes in the article TANAP AND TURKEY'S ENERGY AMBITIONS. On November 30, Erdogan and Azerbaijan's President Ilham Aliyev inaugurated a link between the Turkish and Greek gas grids, which marks the completion of the Trans-Anatolian Pipeline (TANAP). This is no mean feat. Surely, its supplies to Europe - some 10 billion cubic metres (bcm) annually - are a drop in the ocean compared with the volumes the EU receives from Russia (176 bcm in 2018). But for countries like Greece and Bulgaria, both of which import about three bcm of Russian gas a year, this is a significant alternative source. The two countries have contracts for one bcm with the company behind TANAP - Shah Deniz, an international consortium of BP, Azerbaijan's SOCAR, Turkey's TPAO, Norway's Equinor and others. This gives the two countries bargaining power vis-a-vis their main supplier, Russian state-owned energy giant, Gazprom.

According to Natural Gas World, TANAP represents a strategic achievement for Turkey. For a long time, it has strived to graduate from a larger consumer to a transit country, capitalising on its position in between oil and gas-producers and major importers in Europe. The arrival of Azeri gas to the Balkans, brings that vision to fruition. With the opening in 2006 of the Baku-Tbilisi-Ceyhan (BTC) pipeline, which runs to the strategic Turkish seaport of Ceyhan, Azerbaijan was able to export its oil to international markets. The Baku-Tbilisi-Erzurum (BTE) gas pipeline inaugurated the same year allowed the supply of Azeri gas to Georgia and Turkey. Now with TANAP, Azerbaijan can also sell its natural gas in the EU and seize some market share from Gazprom. Ankara's long-standing ambition is for TANAP to be scaled up from 16 to 31 bcm, with gas coming from other destinations such as Turkmenistan, northern Iraq and Iran. If it plays its cards right, Turkey may establish itself as a trading hub and top-notch energy power.

Such an outcome, however, remains a distant prospect. Problems with supply in producer countries due to both production challenges or security concerns, as well as uncertainty about future demand in Europe, geopolitical risks, regulatory hurdles, and domestic instability all constrain Ankara's ambitions. The opening of the TANAP/TAP connection has helped move forward work on an interconnector linking up Greece and Bulgaria's grids. Known as IGB, the interconnector will also serve a planned floating regasification unit at the port of Alexandroupoli in northeast Greece, a project backed by the US.

Cross-border energy connectivity in Southeast Europe is in line with both US and Turkish interests. The EU, too, despite tense and often fractious relations with Erdogan, has been a staunch supporter of the Southern Gas Corridor. It falls in line with its own diversification efforts launched after Russia's temporary cuts of gas deliveries through Ukraine in 2006 and 2009. Competition over gas shipments to and through Southeast Europe is heating up and with the inauguration TANAP, Turkey has become a key player. Chances are that in energy, as in other issues, such as the Syria conflict, it would continue to balance between the West and Russia in order to get the best deal.

TurkStream to stabilize the situation in the region

Ilham Aliyev: "Combining efforts of Azerbaijan, Russia and Turkey to enable pursuing predictable policy in terms of development of energy resources and their transportation"