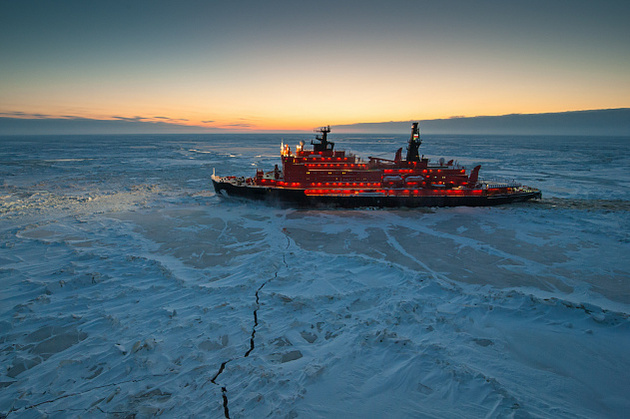 On January 30, the Russian government approved a number of acts concerned with rendering new economic benefits and subsidies to businesses or investors willing to engage in projects in the country’s High North. The Jamestown Foundation reports in its article Russia Prepares Ambitious Economic Strategy for Arctic Region that the adopted proposals were jointly prepared by the Ministry of Finance (Minfin), the Ministry of Energy (Minenergo) and the Ministry for the Development of the Russian Far East (Minvostokrazvitya).

Taken together, this initiative provides a steady foundation for the introduction of Russia’s Arctic strategy until 2035, which is premised on the following documents:

– The Federal Law on a Special Economic Regime of the Arctic;

– The Foundations of State Policy of the Russian Federation in the Arctic Until 2035;

– The Strategy on the Development of the Arctic Zone Until 2035; and

As a means to attract foreign financial capital to the above-mentioned Arctic territories, Russia has outlined four main groups/types of projects under consideration for various government benefits:

– The extraction of hydrocarbons located offshore, on Russia’s continental shelf, with a severance tax (imposed on the removal of natural resources) set at 5 percent for oil and 1 percent for natural gas over the next 15 years, starting from the inception of industrial extraction. It is also rumored that the Russian state might be willing to provide additional benefits for “surveys, assessments and exploration for hydrocarbons” in this area;

– The extraction of hydrocarbons on the continent, with an emphasis on liquefied natural gas (LNG) and gas-chemistry (gazokhimiya). New investors are expected to be promised a severance tax of zero percent in the next 12 years upon starting industrial extraction;

– The production of LNG (as well as other projects related to the gazokhimiya industry). Investors will have to pay the severance tax in full only after 17 years of industrial production;

– Other projects (prospective benefits will largely depend on what will be extracted and the scope of the project). Aside from non-hydrocarbon-related branches (including minerals), this group will include various infrastructure projects (such as seaports and pipelines).

The head of the Ministry for Development of the Russian Far East and Arctic, Alexander Kozlov (appointed in 2020), has stated that the key idea behind the proposed benefits and stimuli for investors is premised on Moscow’s strong determination to break the post-1991 trend in the region. Specifically, he argued that the Arctic zone, whose actual share of Russian GDP is close to 10 percent and receives 10 percent of total foreign direct investment (FDI), suffers from chronic under-population, containing less than 1.5 percent of the total Russian population. Furthermore, he argued that all major components of the Human Development Index (HDI), including education, healthcare, employment and economic wellbeing, are lower in the High North than the Russian average. As a result, he stated, “For the past 15 years, the local population has decreased by 0.3 million”. Sergey Veller, the president of the Union of Manufacturers and Entrepreneurs of Murmansk Oblast, expressed similar concern and argued that the only way to stop further depopulation of the Russian Arctic is to increase its attractiveness through new economic opportunities and job creation (Murman.ru, June 19, 2019).

These and other concerns are all reflected in the above-mentioned government planning documents. The main expectations pinned to the initiative are premised on the prospect of creating more than 21 new large regional mega-projects (including the Indiga Port, in Nenets Autonomous Okrug), exploration of large deposits of platinum and other metals in Krasnoyarsk Krai and Murmansk Oblast, and the creation of a full-cycle lumber/timber-producing complex in Arkhangelsk Oblast. These and hundreds of smaller commercial initiatives (to become fully operable within the next 15 years) are expected to result in the creation of 200,000 additional jobs in the region and “make the Arctic attractive to Russian youth and young specialists”.

That said, it is important to underscore that Russia’s main economic interests the Arctic region actually boil down to just two elements. First is production of liquefied natural gas, which, “in the upcoming 15 years, could turn Russia into one of the largest players on the global LNG market.” This will be achieved primarily through Yamal LNG (located in Sabetta, on the Yamal Peninsula) and Arctic LNG 2 (Gyda Peninsula). Second, Russia is making huge investments in the so-called Northern Sea Route, intended not only to give Russia access to Arctic natural resources, but also to provide a maritime corridor for Chinese goods traveling to the European Union. Russia aims to be solidify its role as the main transportation artery between the two—both on land and by sea.

Importantly, in line with the above-mentioned legal documents and proposals, some specific suggestions have already been voiced. Namely, it has been argued that a subsidized mortgage program (2 percent annual rate) should be created to aid all who are willing to move to the Arctic region. Additionally, Minvostokrazvitya proposed creating a new state corporation, “Roshelf,” specifically tasked with the exploration and extraction of hydrocarbons in the High North and the Far East. Accordingly, this corporation should be given exclusive rights to “represent Russia’s interests” and to “exploit [Russian] resources and grant the right to participate in projects [to] private investors”.

Two important inferences should be drawn from these developments related to the Russian Arctic. First, for the first time, an initiative of this scope and ambition has been jointly drafted by three powerful institutions, with one of them being made directly responsible for the region. Second, the Arctic Strategy has outlined Russia’s most important national interests in the High North. And aside from its economic aspects, this Strategy clearly points to a necessity to defend Russian sovereignty and territorial integrity in this remote but resource-rich region.