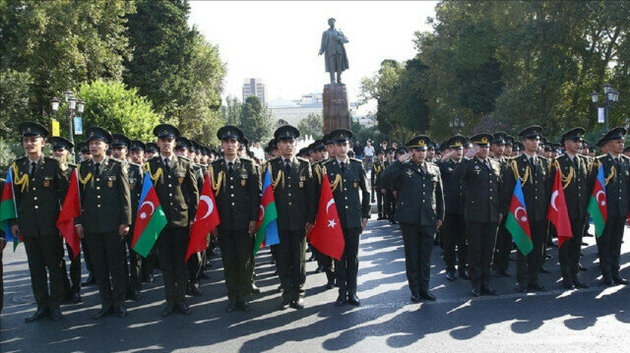 These days, Azerbaijan marks the 103rd anniversary of the liberation of Baku, the country's capital, under the leadership of the Caucasian Islamic Army, which was headed by the 29-year-old Nuri Pasha (Killigil), Yeni Safak writes. The friendly political, legal, trade, and military relations between Azerbaijan and Turkey were documented shortly after the foundation of the Azerbaijani Democratic Republic on May 28, 1918 with the Treaty of Batumi, signed between the newly established country and then Ottoman Empire on June 4, 1918. With the pact, the empire recognized the independence of Azerbaijan, which could in return request its military help in case of any threat.

After the republic's declaration of independence in Georgia, Fatali Khan Khoyski, Azerbaijan's first prime minister, formed the government in Ganja, now northwestern Azerbaijan, in June, as he was not able to travel directly to Azerbaijan's current capital Baku since the city was then controlled by Armenian militants and Bolsheviks. On Sept. 15, 1918, an elite Ottoman force called the Caucasian Islamic Army under the leadership of Nuri Pasha (Killigil) was sent by then Minister of War Enver Pasha to what is today Azerbaijan in the closing months of the World War I following a plea from the region's people. The Caucasian Islamic Army, made up of Turkish and Azerbaijani soldiers, completed its mission in September, liberating Baku and thus laying the groundwork for the country's independence decades later in 1991.

Over 1,100 Caucasian Islamic Army members sacrificed their lives together with the Azerbaijani people for the cause. The Caucasian Islamic Army has an irreplaceable role in Azerbaijan's life, ownership of Baku and turning the city into the capital. The liberation of Baku at the time paved the way for the transfer of the capital from Ganja and ensured the territorial integrity of Azerbaijan, providing the basis for its modern day boundaries. Enver Pasha – also an elder brother of Ottoman Gen. Nuri Pasha – personally conveyed the message to the Ottoman capital Istanbul that Baku had been liberated from Armenian gangs.

Situation in region one century ago

Emerging from the internal upheaval brought by the fall of the Romanov Tzars in Russia, a Transcaucasian parliament, known as the Seym or Supreme Power of the Transcaucasia, was formed in Tbilisi, the capital current of Georgia, on Feb. 14, 1918, by representatives from the Southern Caucasus. The Muslim faction of the Seym comprised of 44 delegates who were elected from the region to the Russian Constituent Assembly formed after the 1917 Revolution and represented over a million Turkic Muslims in Azerbaijan and the Southern Caucasus. The Muslim faction, or Council of Muslims, was functioning as a Muslim Parliament of Transcaucasia.

As a result, the Georgian delegation left the Seym and announced the independence of Georgia on May 26, 1918. Following Georgia, members of the Muslim faction held a separate meeting one day later and decided to declare the independence of Azerbaijan. With this purpose, the Transcaucasian Muslim Council proclaimed itself the National Council of Azerbaijan – the country's lawmaking body.

During that meeting, a statesman and prominent public figure, Mammad Amin Rasulzade, was elected chairman of the National Council of Azerbaijan, though he was not present at the meeting, but in Batumi, Georgia. On May 28, 1918, a historic meeting in Tbilisi adopted the Declaration of Independence of Azerbaijan, consisting of six articles, making Azerbaijan the first Parliamentary Republic in the Muslim East. Being the beacon of hope for the independence movement of Azerbaijan in the 20th century with his remarks, "Once raised, the flag never falls!" Rasulzade played a key role in the formation of the modern Azerbaijani identity.

The government led by Khoyski then came to Ganja in June, and was not able to come directly to Baku because the city was then controlled by Armenian and Bolshevik militants. The newly founded state managed to form the national army on June 26, 1918. The Caucasian Islamic Army came to help the Azerbaijani people in Ganja upon their appeal to the Ottoman Empire, and completed its mission in September in Baku after liberating the city. In December 1918, the first decision of the newly established Azerbaijani Parliament was to place a monument for the "martyred Ottoman soldiers and officers" at the highest location in Baku.

Though its plan and sketches were prepared, the Soviet occupation in April 1920 did not allow its construction. Finally, the monument was erected in 1999-2000. The Azerbaijani Democratic Republic was toppled after almost two years by the Soviet Union, and the country restored its independence only after the collapse of the USSR in 1991. Turkey was the first country to recognize Azerbaijan's independence, and Baku opened its embassy in Turkey in 1992.