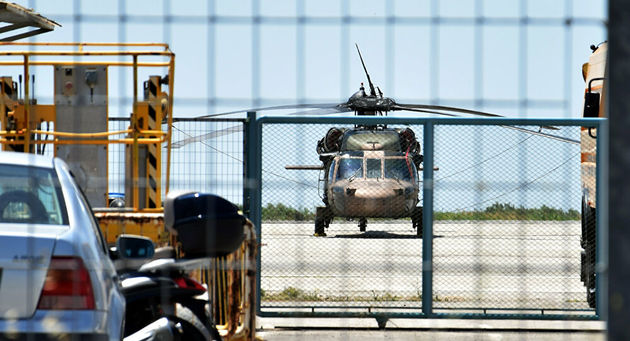 One of the images engraved in the memories of those who lived through the bloody July 15, 2016 coup attempt in Turkey was the attack on the Istanbul Police Department. In order to carry out this attack, some coup plotters were carried to the police department by a Sikorsky helicopter, Daily Sabah reports in its article What confidential information about Turkey did 8 fugitives give Athens?

When that helicopter arrived on Vatan Street, it opened fire civilians, killing one. That helicopter continued its operations throughout that night. After the Istanbul Police Department, it carried the putschists to then Doğan Media Center building to stop the broadcasting of private channels and prevent the public from receiving accurate information. The pilots flying this helicopter were identified as Maj. Ahmet Güzel and Maj. Gençay Bölük.

Many Sikorsky helicopters flew above Istanbul that night. The putschists were being deployed both by land and air. One of the helicopters was a Sikorsky with the tail number, 11308. The pilots flying this helicopter during the coup attempt were Abdullah Yetik and Süleyman Özkaynakçı, and the technician was Mesut Fırat.

During the coup attempt, another Sikorsky with the tail number 11309 was in charge of carrying a group of coup plotters to the Kuleli Military High School and the First Army Command. The pilot in the cockpit of this helicopter was Feridun Çoban. Çoban carried the putschists to the area to seize the Istanbul Police Department and had to return to the base when his helicopter was damaged by fire.

The coup plotters also attempted to take control of Istanbul's Atatürk Airport in Yeşilköy. They carried some personnel there on a UH-1 helicopter. The pilot of the helicopter that landed at the airport and waited there was Uğur Uçan. After the security forces entered the airport, Uçan left the airport by helicopter with technician Bilal Kurugül and returned to the Command of the 66th Mechanized Brigade.

The extradition to Turkey of these eight individuals, who were clearly known to have attempted a coup in Turkey and for whom arrest warrants were issued, could have been a sign of goodwill from the neighboring country. However, the Greek authorities did not extradite them to Turkey, despite persistent demands.

This was against the extradition treaty between the two countries, as well as international rules and good neighborly relations. However, Greece did not take such a step. It only sent the helicopter back to Turkey. It was found that the helicopter had its friend or foe identification system dismantled and that night vision glasses worth $20,000 were stolen.

Well, why does Greece not extradite the putschists? Probably because it wants to access some information about Turkey through these soldiers. Of course, these putschists, who can open fire on their own people, can be expected to give up any confidential information they might have on Turkey to Greece. However, it is a legitimate question of how much information the low-ranking soldiers actually have.

Turkey has changed and revised all its military plans, just in case, considering other FETÖ-affiliated coup plotters who have fled abroad.

If Greece thinks it can defeat Turkey based on the information provided by these coup plotters, it is wrong. I do not know if you have seen the footage, but recently, six Greek F-16s entered the area where Turkey issued a navigational telex (Navtex) and was forced to leave the area by Turkish jets. If Greece underestimates Turkey, makes such attempts and continues to play with fire, it will receive a greater response than what those eight coup plotters could ever know.